Roundtable #3: Predictions and donuts, and I don't mean the ones administered by Georgia's defense.

This week's Blogpoll roundtable arrives courtesy of Michigan blog Maize 'n' Brew, who, presumably in between cigarettes smoked with a satisfied postcoital grin after the Wolverines' dismembering of Notre Dame, somehow managed to come up with some pithy questions soliciting projections for the remaining season:

1. It's only the third week of the season and we've already seen some highly ranked favorites drop out of national championship contention. Preseason favorite Cal dropped to #21 after a loss and a pair of underwhelming victories. Who's your pick as the next NC contender to take a fall?

I guess it kind of depends on what your standards for national-title contention are, but I think the Florida Gators are going to find themselves looking over their shoulders for the next few weeks. This is not to take anything away from the Gators' coaching or talent, but it really says something about the overall strength of the SEC when a team as good as Florida might still be only the third-best team in the conference. We'll be able to make a final judgment on that in just over a month's time, however, once the Gators have finished running a gauntlet of Alabama, LSU, Auburn, and Georgia, the latter two away from the friendly confines of the Swamp. I sincerely doubt that any team in the country faces a more brutal stretch of defenses this year than that one, and I just don't see the Gators exiting it without dropping the proverbial soap at least once (though, as you'll see later, I still think they're the odds-on favorite to represent the SEC East in the conference title game).

Runner-up: Michigan. They did look terrific against the Golden Domers, but this weekend they commence a five-game stretch (Wisconsin, Minnesota, Michigan State, Penn State, Iowa) that doesn't exactly allow for a lot of error, and the Wolverines are certainly not immune to coughing up the occasional mid-season in-conference clunker.

2. By that same token there are several schools hanging around without a loss that all of a sudden look like surprise contenders. There are also a few one-loss teams with a legit shot at getting back into it. Looking at the rankings, who's the team no one's talking about with the best shot at crashing the party?

Virginia Tech began the season at 17th in the sportswriters' poll and 16th in the coaches', with both Florida State and Miami above them; that now looks like the biggest joke since Dubya's assertion that Michael Brown was doing a "heckuva job." (Don't want to go around spreading unsubstantiated rumors, but I heard that Brownie has since found employment as a Pac-10 official.) Now, however, the Hokies look like the only team in the ACC that can even remotely claim elite status, and given the utter sludge that the ACC has put on the field this season, it doesn't take a wild night of psychedelic-mushroom bingeing to start having visions of VT rolling through the season 12-0 and winning a 13th in the ACC title game. Unfortunately they're presenting all the symptoms of 2004 Auburn Syndrome -- low preseason ranking, weak OOC schedule -- which means they could go 13-0 and still not snag a national-title-game berth if there are two other undefeated teams when BCS bids are handed out. Nevertheless, I expect the Hokies to be in the mix for quite a while, and for their buzz to steadily increase as they hack their way through their conference slate. If you saw the last 30 minutes of "Kill Bill," you have an idea what VT is about to do here. 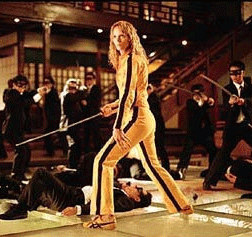 Those of you lucky enough to have your lives, take them with you. However, leave the limbs you've lost. They belong to me now. Except you, Miami! You stay right where you are!

Runner-up: Maize 'n' Brew picked none other than Georgia as his potential sleeper, and while I live in constant, mortal fear of jinxing my team with lofty expectations, I have to admit that things seem to be setting up very well for the Dawgs. They really won't have been tested until the October 7 matchup against Tennessee, but as I've said before, that game is looking more and more winnable as the season progresses. If the Dawgs take that one, then in all probability they'll be 8-0 when the Cocktail Party comes up on the schedule, which would match the two best seasons the Dawgs have had in Mark Richt's tenure (2002 and 2005). To duplicate those efforts with a team that was surrounded by so many question marks coming into '06 would truly be an inspiring accomplishment, and could conceivably put us on the way to becoming only the ninth program in the history of college football to string together five 10-win seasons in a row.

3. Every team has their quicksand away game. You know -- that place you should win but somehow find ways to snatch defeat from the jaws of victory or at least scare the &*%^ out of you every year. Did you know that over the last 21 years Kentucky hasn't won once in Knoxville? Where is your team's yearly sandtrap?

Technically it's a neutral-site game, but if it's defeat snatched from the jaws of victory you want, no single rivalry in the world has featured more of that than Georgia-Florida (well, unless you're talking about Democrats-Republicans, and that isn't really sports). Yes, we've won only twice since Spurrier arrived at UF in 1990, and about the only bright spot at this point is that we're simply running out of ways to lose. There will be ample time in a few weeks to make myself clinically depressed analyzing this one, so I'll leave it at that.

Now if you'll excuse me, I have some train tracks to lie down on.

4. Now that you've looked into the darkest place in your football soul, free Escalades aside, turn and look into your crystal ball. Conference play is either just starting or a single game in. Based on what you've seen so far, give the order of finish in your conference, and if you've got a conference championship game tell us who the winner will be. Independents must predict the remainder of their schedule. The results your predictions will be held against you at the end of the season.

SEC East
1. Florida -- Sigh.
2. Georgia -- Second in the division, 10 wins in a major rebuilding season? Sold.
3. Tennessee -- Not prepared to write them off yet, but the Cal beatdown is looking more like an anomaly with each passing week.
4. South Carolina -- Though, as EDSBS points out, it's entirely possible that they'll be staring up Kentucky's anus at season's end.
5. Kentucky -- Mediocre but not terrible, which I guess qualifies as a moral victory in Lexington these days.
6. Vanderbilt -- Mediocre and terrible.

SEC West
1. Auburn -- Legit contender for the national title.
2. LSU -- Legit contender for an at-large BCS bid. Trust me, Notre Dame/Texas/WVU, you want no part of this.
3. Alabama -- Their offense is store-brand, but so's their schedule.
4. Arkansas -- Likely to finally snag a bowl invite this year, but shouldn't a team with Mitch Mustain and Darren McFadden have a wee bit more offense than this?
5. Ole Miss -- Yeah, who needs David Cutcliffe? Bowl games are stupid anyway.
6. Mississippi State -- Every time a bell rings, an angel gets its wings; every time MSU's offense takes the field, an angel gets an STD.

As for the conference championship game: Auburn wins the rematch with Florida in the Georgia Dome.

5. In keeping with the spirit of Maize n Brew, name your beverage of choice on game days and why. It need not be alcoholic, as there are some of us who choose not to imbibe on game day. Further, it need not be limited to a single brand/type/category. If you enjoy drinking PBR and Kraft Turkey Gravy at the same time (which I have personally witnessed), please, elaborate. Finally, if you should feel so inclined, and this is not a requirement, add an anecdote involving said beverage choice.

It most certainly does need to be alcoholic, friend, and shame on you for even suggesting otherwise. On most game days I can be found marinating my central nervous system in a light-colored pilsener like Spaten or Pilsner Urquell; Stella Artois is another standby. I know that's not an especially wild or exotic selection, but if you want to roll Hey Jenny Slater style on gameday, you gotsta pair it up with some Krispy Kreme donuts.

You might perhaps think that beer and Krispy Kremes is a bad combination. You would, however, be completely wrong. I think it was the 2001 Georgia-Ole Miss game where I first tried this combination; it was one of those early-kickoff JP games, so I didn't see anything wrong with helping myself to breakfast food whilst doing my usual Saturday beer-recycling. (And let the record show that that wasn't the dumbest thing a Georgia football fan did for that game.) I now make every effort to include Krispy Kremes in my tailgating or whatever other kind of gameday festivities I'm taking part in. Give it a try this weekend . . . if you're man enough.

Got Krispy Kremes & too much time on your hands?

Cut one in half, so you can put more stuff in the middle.

Slice of american cheese. On top.

Nuke it for a few seconds so the american cheese glues the krispy kreme to the whole concoction and try to swallow your shame.

Dude, I was ready to make fun of you for your "sissy" game-day beer. But the Krispy Kreme raised you a couple levels.