Friday Random Ten and Mystery Meat (super-size your combo for only 99¢!). 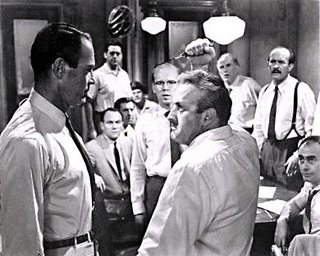 · Posting is going to be a little sparser than usual over the next week, 'cause guess what? I got jury duty next week. And while everyone has been telling me, "Oh, you'll be out of there after two days at the most," I'd estimate that every time someone tells you that, the chances of you ending up there all week increase about 5 percent. Last year everyone was telling me I'd only be there a couple days, and I ended up being stuck downtown pretty much the entire week. And on a child-molestation case, no less. That's really how you want to spend your week, hearing detailed stories from a girl about how her granddad touched her in her special place. I'm hoping I get something nice and simple like a good old-fashioned double murder this time around, but my friend Stanley gave me what he insists is a sure-fire way to get out of jury duty altogether: "At some point while they're asking you questions during voir dire, just say, 'If they weren't guilty, they wouldn't be here.' "

· In anticipation of this weekend's big Georgia-South Carolina tilt, T. Kyle King, mayor of the college-football blogosphere, does a head-to-head comparison and re-issues his confession that, in spite of the general historic inconsequentiality of the Gamecocks, he does care about the SC game. I can see where he's coming from: When we played Western Kentucky last week, a lot of Georgia fans grumbled that it was a pointless game, since if we lost, it'd be a suicide-inducing embarrassment, while if we won, even by a lot, the reaction of the rest of the country would be "So what?" Well, the Dawgs are in a similar no-win situation this week, because if we lose, we'll never hear the end of it, while if we win by anything less than a multiple-score margin, we'll still have to hear Gamecock fans crowing for the next 365 days solid about how they "almost" beat us. No shit -- that's what qualifies as an esteem-builder in Columbia these days. Comrade Richt, please beat those slags by more than a TD so that we don't have to deal with that. 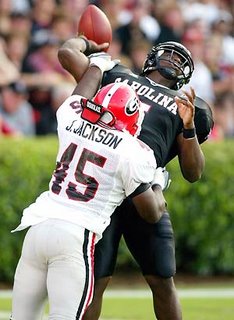 · In other Dawgblogging news, Paul Westerdawg has a bunch of dynamite photos from the WKU game by Jim Hipple (and anyone who can make that game look exciting is truly an artist) -- including one of Joe Tereshinski showing his loyalty by being the first to congratulate the frosh QB who could very well end up with his job. Paul also put up a quote by none other than little ol' me about JoeT3. Here's wishing the best of luck to both Tereshinski and Stafford this weekend, no matter which one comes out of Columbia with the starter's job.

· Slightly less important, but no less exciting, is this weekend's clash of the titans between #1 Ohio State and #2 Texas in Austin. Now, as I've no doubt told you on multiple occasions before, it is unofficial Hey Jenny Slater policy to root for any team that sent me a "yes" letter when I was applying to college years ago, so that favors the Longhorns. However, I also have a first cousin at Ohio State, so the family could potentially trump the college-acceptance criterion. What to do? Whom do I cheer for? This is all so confusing and I wish someone would help me dec

Oh. Well then hook 'em Horns it is. Thank you, M Zone, for clearing that up for me.

· In case you haven't heard, ABC is preparing to run a pseudo-documentary about "The Road to 9/11," which was written and created by a right-wing activist, has been previewed exclusively by right-wing commentators, and has basically been put together in such a way that it's almost like they're trying to come off as a right-wing fantasy. Fortunately, since we can now make docudramas that just blatantly make shit up about factual historic events and get them aired on major-network television anyway, I've decided to start filming a project I wrote a long time ago called "The Road to Columbine," in which Karl Rove and Paris Hilton got the idea to shoot up their suburban Denver high school after listening to subliminal Satanic messages that Sean Hannity inserted into his radio show. While I'm doing that, Ann has background on the 9/11 con job and info on how you can write to ABC execs to declare your displeasure.

· Speaking of stupid people doing stupid things, Lindsay Lohan got jacked at Heathrow Airport for her Hermès bag that apparently carried $1 million worth of jewelry. Not that this isn't a horrible tragedy, but really, what the fuck is a 20-year-old girl doing running around with seven figures' worth of jewelry in a bag? I can't even carry a bottle of freaking Dasani on an airplane anymore, but Lindsay Lohan is just wandering around with a bag whose contents are worth more than, well, every single dime I've earned in my lifetime? Maybe she was just carrying them around in case she got stuck all by herself with no money in a big city or something and needed to have something to pawn, but dude, that's what travelers' checks are for.

Feel free to add your own Ten, or any other random thing you wanted to bitch about, jury duty or anything else, in the comments.
Posted by Astronaut Mike Dexter at 8:02 AM

Don't know how it is in AL, but in SC if you serve as a juror in a trial you are excused for the next two years. You should look into it if you want to escape.

I think the Shuggie Otis original version of Strawberry Letter #23 is stronger, but both rock my pants off.

I know this is going to come off as victim-blamey, and I put absolutely all of the blame for the theft on the person who actually took something that wasn't there, but come on. If you're carrying around that much jewelry and a purse that self-identifies as filthy rich, might you not take the care to keep an eye on it? If you were actively trying to get rid of a million dollars in jewelry, your best bet would be to put it in a bright orange $1,600 handbag and leave it on a trolley at the airport. What a dope.

Wasn't theirs, rather. Good gravy, it's a Friday.

I would expect that version of 9/11 from FOX.

Someone complaining about right-wing activism on one of the networks?

The absurdity of this is obviously lost on you.

This was before we even knew that her and KKKarl Rove planned the Columbine murders, and were only able to pull it off thru their proxy's by Clinton's failure to arrest them at Ruby Ridge and Waco. I wonder if they are also behind the as yet unsolved anthrax attacks.

There goes the Buckeye on your helmet sir.

I had jury duty last month for the first time in my life. Actually, I had always wanted it at least once.... another pack animal in the caravan of justice, and all that.

I know, I know, be careful what you ask for. I was on a brutal murder case that gave me raging headaches every night.

Good luck with yours.

You are going to trust someone's judgement from the M-Zone to give you any advice relative to OSU? Right - good objective opinions from a Michigan guy, with no negatives towards OSU! They may not show as much midriff and wear sexy chaps as do some, but you will find some lookers (if that is all you want in a girl!) in OSU's cheerleading squad! here for instance