Nope, I got nothin'. 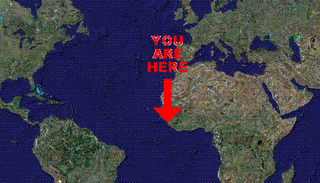 Various things that were happening on Tuesday, September 26:

· The most popular movie in America was Jackass Number Two, which took in $29 million at the box office.

· The most e-mailed story on Yahoo! News concerned a vintage Barbie doll being sold for nearly $6,000 at an auction.

· I was still living down the shame of having completely destroyed a toaster over a football game.

· Hollywood was abuzz with Lindsay Lohan's plot to get back at an ex by letting some other dude nail her.

· Falcons fans were screaming bloody murder about how the team's loss to New Orleans in the Superdome the previous night was "rigged," and

· my friend Meghan e-mailed me to let me know she was in Sierra Leone, working for a charitable organization called Peace Child teaching women and children about democracy.

One of these things is not like the other. Can you guess which one? Yes, it's the last one, the only one that does not involve silly people getting worked up about petty, unimportant bullshit.

This is not the first time Meghan has done something like this -- when I saw her in Atlanta around New Year's, she'd just gotten back from New Orleans, where she'd been volunteering with the Red Cross to inspect houses in the 9th Ward for unretrieved corpses -- but given that Sierra Leone is still technically in a state of emergency first declared during the country's horribly brutal civil war, I think it's safe to say she's at some risk to her life over there. And sometimes it's an e-mail like the one she sent -- not bragging about what an incredibly generous person she is, just letting people know where she was and what she was doing, drop her a line sometime -- that you need to snap you out of your focus on completely irrelevant minutia and remind you that, no, you're actually not the most unfortunate, put-upon person in the world just because you had to spend the previous day getting bored to tears in a software training presentation.

So Meghan makes it onto the blogroll with a bullet, and I hope she'll update her blog regularly just so I can find out a little bit about what life is like over there -- Lord knows I would never have any idea otherwise. Give her a look when you get the chance. In the meantime, no more bitching, moaning, or appliance-throwing over something as minor as not covering a goddamn point spread. For the next few weeks, at least.
Posted by Astronaut Mike Dexter at 8:56 PM

Email ThisBlogThis!Share to TwitterShare to FacebookShare to Pinterest
Labels: blogs that are better than mine

The Lohan story is overblown. She should know that I am no longer interested in her and her fooling around with some other guy isn't going to make me jealous.

Jessica and I have both moved on.

That certainly puts the whole TO "thing" in perspective.

So, not to comment-jack (is that a word?), but have you seen this?

Fuck that. The game was rigged.