Thursday Mystery Meat, brought to you by Mercury, Wofford University, and Under Armour. 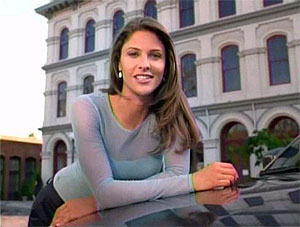 · There's a new addition to the Hey Jenny Slater Potential Future Ex-Wife Roster, and it is Jill Wagner, late of the TV ads for Mercury cars. I know this means nobody will believe me when I tell them I was thinking about buying a Milan anyway, but I can't deny it: I love the Mercury Girl. I'm sure Melissa Theuriau is OK with this -- she lives across the ocean and everything, so she and I have, uh, an understanding.

Mercury Milan or Citroën C5: Which one would I rather drive?

. . . Maybe that's because right-wing, knuckle-dragging Republicans like myself took over Congress in 1994 promising to balance the budget and limit Washington?s power. We were a nasty breed and had no problem blaming Bill and Hillary Clinton for everything from the exploding federal deficit to male pattern baldness. I suspected then, as I do now, that Hillary Clinton herself had something to do with 'Love, American Style' and 'Joanie Loves Chachi.' And why not blame her? Back then, Newt Gingrich felt comfortable blaming the drowning of two little children on Democratic values. Hell. It was 1994. It just seemed like the thing to do.

A pretty succinct admission that the "Republican Revolution" of '94 has turned into Animal Farm, with the Republicans having come in promising dramatically reduced spending, smaller government, greater accountability, more ethical behavior -- and instead giving us skrocketing deficits, the most intrusive government since the McCarthy era (if not before), more government secrecy, and the same old unethical behavior we've decried in politicians since the beginning of time. The pigs are walking around on two legs and drinking martinis, folks. It's also interesting to note that Scarborough appears to be tacitly admitting that the current "hate" directed toward President Bush is, in reality, in no way worse than what was directed at the Clintons throughout the '90s.

· Fortunately, some Republican senators are apparently willing to demonstrate some integrity and a desire to keep the United States's good name from being further dragged through the mud -- to wit, standing up to Bush's desire to withhold evidence from terrorism defendants, use evidence gained through torture, and declare secret American interrogators immune from the Geneva Conventions. Sullivan says this may have thrown a big monkeywrench into Rove's 2006 election strategy. I think Rove may still be too wily for that, but I hope Sullivan's right.

· On a sort-of related note, here's an interesting argument against racial profiling, only replace "race" with "species." 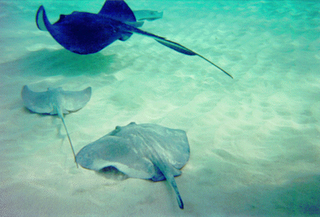 Having a razor-sharp, barbed or serrated cartilaginous spine growing from your tail is not a crime.

· The third installment of that Blogpoll thingI've been participating in has been released, with Georgia having broken into the top 10 at #9. You'll note that I had them 15th in my ballot, which earned me a spot, for the third straight week, on the shortlist for the "Straight Bangin' Award" for the blogger whose opinion of his own team is most pessimistic relative to the rest of the voters. What can I say? I'm Catholic. Self-loathing is like mother's milk to us.

· Not appearing in your picture: South Carolina. Steve Spurrier apparently took Saturday's shutout loss to Georgia pretty hard. His quarterback, though, took it even worse.

· Not that you care, but Cooked Crackalacky's opponent for this weekend is D-IAA Wofford. It would be convenient to call them a creampuff opponent, but then again the Gamecocks were finding ways to lose to D-IAAs as recently as 1990, so maybe not. And besides, Wofford has college football's second-most-awesome mascot (after Georgia, of course) -- the Terrier. Go ahead and make your "little yappy dog" jokes, but I've lived with a terrier for more than two and a half years now, and they can be ferocious when they want to be. Ferocious enough to take down a mascot that looks like the hood decal on a late-'70s Trans Am, at any rate. Antichrist with a bar-fight-starting QB, or second-best mascot in the nation? I know who I'm rooting for this weekend. 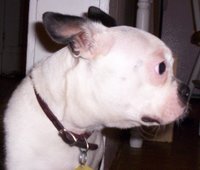 · Staying in the SEC West, a little birdie told me, or rather e-mailed me, the other day that Houston Nutt is feeling serious heat in Arkansas and is actually campaigning for the N.C. State head-coaching job that is likely to be available after this season, what with the Chuck Amato Death Clock clicking like a mofo after the Wolfpack's home loss to Akron. This becomes especially interesting when you consider that antsy Arkansas fans have had a wandering eye on former Miami coach Butch Davis, who played for the Razorbacks in college, for some time now. Stands to reason that if the Arkansas administration thinks they can snag Davis, they'd spend a lot less time worrying about where the hell Nutt ended up, doesn't it?

· And finally: Is Eva Longoria carrying an Under Armour purse? 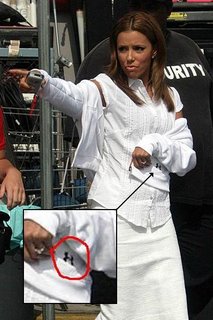 We must protect these valuables!
Posted by Astronaut Mike Dexter at 8:20 PM

Email ThisBlogThis!Share to TwitterShare to FacebookShare to Pinterest
Labels: blogs that are better than mine, football, hot chicks, Jenna the wonder terrier, Mystery Meat, politics

Jill Wagner was once on Monk. The Washington Redskins had a great receiver named Art Monk. The Catholic Church that you mention in this post also has Monks.

The circle is complete, obviously this is a sign, but of what I am not sure. I suspect it means if you buy the Milan you will loose an incredible amount of equity as soon as you take possession and have an almost nonexistant secondary market when you go to trade it.

Or perhaps you should let Melissa Theuriau down easy as it is a sign that you and Miss Wagner are destined.

Eva's not carrying a purse, unless that purse has a convenient zipper that looks a lot like the pocket and placket of her hoodie.

it's just her hoodie, but yes, she's rocking the under armor. We must protect this house! Huzzah!

I Must Protect This Blouse!