How can you expect to be taken seriously? 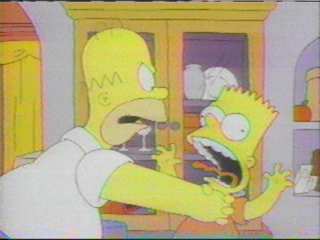 I admit it, I'm a rageaholic! I can't get enough rageahol!

After the final seconds ticked down and Georgia-Colorado '06 came to a merciful end, my sister and I each did a shot in Joe Cox's honor and promised to never speak of the game again. This was the kind of game where you don't just burn the game tape, you shoot the ashes into deep space. And you take off whatever clothes you were wearing while you watched the game and burn those. So anyway, all I will say is this.

While I take college football a lot more seriously than some people, even engaging in some of the ol' football betting once in a while, I'd always figured that I could still approach it with a measure of reason and sanity, keeping a level head and venturing toward neither the extreme of overexuberance nor the extreme of seething despair as I see so many other people doing from time to time. Only once have I ever even come close to getting in a fistfight over a game, and I can't remember a single time when I actually destroyed property. But during the Colorado game, my feeling toward the team went beyond disappointment, where it has been before on occasion, and advanced straight into anger. Rage, even. Enough anger that Ann and I had to leave Loco's Deli and Pub in Homewood, where we had been watching the game, for fear that I would do something to get thrown out if we stuck around.

This turned out to be an astute decision on our part, because after Matt Stafford's fumble to end the first drive of the third quarter, I knocked a chair over in the kitchen, then picked it up and threw it a ways. And when Georgia's next drive also ended in a fumble, I yanked my toaster oven off the counter and hurled it off my balcony. 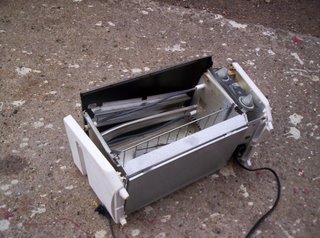 And now we'll speak no more of this, either.

The world at large:

· Did anyone else hear Lou Holtz say during "Gameday Final" that Colorado's performance against Georgia proves they can make some noise in the Big Eight? At this point I'm not sure Sweet Lou's level of higher brain function could surpass that of Terri Schiavo's. What, too soon?

· The good news is I got to watch, in person, the heartwarming story unfold of Mississippi State finally winning a game in 2006. The bad news is, see first sentence. 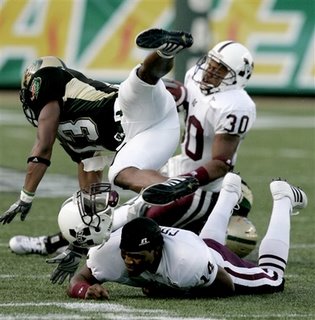 Well, we still got your helmet. Nyeah.

· With USC missing the celebrity mojo of Matt Leinart and Reggie Bush, and Texas and Notre Dame both telling themselves "walk it off, walk it off" after dispiriting top-25 losses, we have a new media darling already being penciled in for a slot in the national-title game: Ohio State. First we had this column, brought to you by MGoBlog, in which the mind-blowingly glib Matt Hayes declares that there is no point in the Big Ten playing any of its remaining conference games because Ohio State is teh r0xx0rz, they're going to blast through the rest of their schedule like C4 through plywood, because they are without a doubt the best team in the country there I said it no takebacks. Then we had a discussion on "Gameday" this morning about who should be #2 in the country (i.e., Auburn, USC, or Michigan). Now, I've got Ohio State at #1 on my Blogpoll ballot and have ever since the preseason, so I'm not going to spend a lot of time casting aspersions on their ability, but why are we just taking the Buckeyes' #1ness for granted less than a month into the season? Given that Texas is clearly not the team they were last year, isn't it possible to argue that Auburn's victory over LSU is as impressive as OSU's over the 'Horns? Given that the Bucks got to avoid Vince Young this year, isn't it possible that we still haven't had a true gauge as to how good their massively renovated defense is (and won't, until they face Iowa and Michigan State, both on the road)? On the other side of the ball, OSU's supposedly solid offense wasn't exactly a Dresden air raid against a PSU defense that got comprehensively dismantled by Notre Dame. Again, I think Ohio State has a bad-ass team this year, but just once I wish our CFB punditocracy could remember that a preseason #1 is not cosmically preordained to go wire-to-wire.

· Well, maybe we shouldn't go closing the door on Notre Dame's media-darling status just yet. Game-of-the-century status is already being talked up for ND's 4th-quarter comeback against Michigan State on Saturday. Sure, a "one-of-a-kind" comeback, why not? It's not like the Spartans are known for ever choking in a pivotal game. 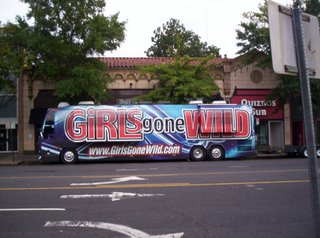 · And finally, it's not football-related, but here's the bus that was parked across the street from my apartment at Club Red all night Friday. Yup, the tour (or whatever) came through Birmingham. We're all quite proud.

Imagine having traversed to Athens, tailgating, going to the game, and standing in the hot sun to watch that crap. That's RAGE, my friend.

That said, I am hoping for a Cox v. Cox showdown in Auburn (just so I can make a T-shirt).

But you guys won, right?

If I didn't know any Michigan or Texas A&M alums, you guys would scare me.

Loved the Schiavo reference. Frist can come find me if he has a problem.