I know that when football season rolls around, it probably looks like this site degenerates into a lot of mindless, frothing fandom and wantonly cruel smack talk. But it's important for you to know that there's more going on here than meets the eye. I don't do this to talk trash and humiliate opposing teams' fans -- well, not solely to trash talk and humiliate opposing teams' fans. I'm making an honest effort to dig into the rich history of the game and educate you as to its background, its traditions, and how those things got us to where we are today. One such effort was my in-depth, exhaustively researched history of the Clausen family back in April; with the football season in full swing, and Georgia facing a big road game this weekend, I decided it was time to mount such an effort again.

Herewith, great moments in the history of the South Carolina Gamecocks. 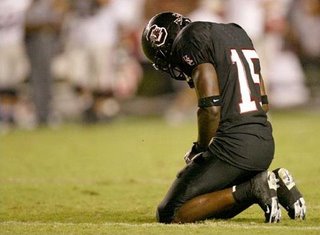 December 24, 1892: South Carolina plays its first-ever football game, a 44-0 loss to Furman University in Charleston. Graduate assistant Lou Holtz, an apple-cheeked young man of 25 at the time, says he knew the Paladins would be "an incredibly tough team. I've never seen anything like them." *

November 3, 1894: The Gamecocks' second season begins in a fashion not unlike their first -- with a 40-0 home loss to Georgia. Based on their early struggles against good teams, USC decides to throttle back the level of competition for their next opponent and schedules the Augusta, Georgia, YMCA. 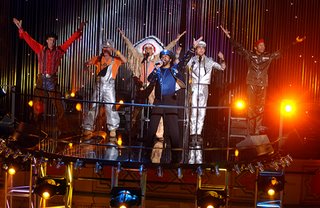 Gamecocks, bow down to your disco-happy, ambiguously gay masters.

January 1, 1946: After 52 seasons of football, the Gamecocks finally go to their first bowl. South Carolina loses to Wake Forest in the Gator Bowl, 26-14.

May 1968: Andrew Card graduates from the University of South Carolina with a bachelor's degree in engineering. Card will go on to become White House chief of staff and the head of the White House Iraq Group, the select cadre of insiders charged with selling the prospect of the Iraq invasion to the American public. I think I speak for everyone when I say we're all really glad that happened. 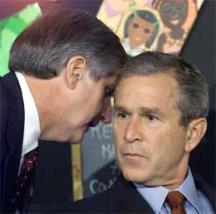 Card's immortal words to President Bush: "Something about a plane, the World Trade Center, yada yada . . . just keep reading My Pet Goat, I'm sure it's nothing."

December 30, 1969: After a brief 24-year absence, the Gamecocks find themselves right back in the bowl mix. They lose to West Virginia in the Peach Bowl, 14-3.

September 25, 1990: After 18 years as an independent, South Carolina accepts an invitation to join the Southeastern Conference. Athletic Director King Dixon announces his intentions for the Gamecocks to become immediately competitive in their new league.

January 2, 1995: After 101 memorable seasons of football, the Gamecocks finally win their first bowl game -- and exact their revenge on West Virginia -- by blowing out the Mountaineers 24-21 in the historic Carquest Bowl. First-year head coach Brad Scott vows that the Cocks' winning tradition is here to stay.

December 4, 1998: Having fired Brad Scott after a difficult 1-10 season, South Carolina announces they have hired Lou Holtz, a former national-title winner at Notre Dame, as their next coach. Holtz vows to bring a winning spirit back to Columbia. 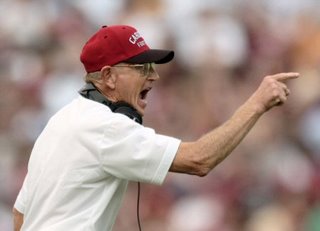 Above, Holtz in Columbia in fall 1999, yelling at kids to get off his lawn. It was later discovered that his "lawn" was, in fact, the field at Williams-Brice Stadium, and the kids were his own players.

February 17, 2002: South Carolina becomes the first SEC school to be mentioned by name on "The Simpsons." In the episode "The Bart Wants What It Wants," Homer directly references South Carolina's rigorous academics and nationwide reputation:

Homer: Don't worry, honey. We can't afford this now, but when it's time, I promise my darling daughter can go to the finest school there is! (under his breath) . . . In South Carolina.

Lisa: OH! I will not be a Gamecock!

November 20, 2004: With South Carolina trailing Clemson by a slim 22-point margin in their annual rivalry game, the Gamecocks elect to go for it on fourth down. The play fails, and when Gamecock lineman Chris White forcefully suggests that a Clemson player hit Carolina QB Syvelle Newton late, a historic debate ensues that rivals the Lincoln-Douglas debates in terms of their progressive nature and forward-thinking ideas. Watch below and feel the sportsmanship!

November 23, 2004: South Carolina announces the hiring of Steve Spurrier, who won a national title at Florida, as their new head coach. University president Andrew Sorensen says "The Gamecocks faithful are proud to call you one of us"; Spurrier replies by calling South Carolina "the very ideal spot for me to coach."

May 30, 2006: Spurrier announces his intention to attend Florida's 10th-anniversary celebration of his 1996 national-championship team.

August 31, 2006: With the Gamecocks clinging to a slim 6-0 lead, tailback Cory Boyd takes an option pass from wideout Syvelle Newton and races 54 yards for the game-icing touchdown against Western Division juggernaut Mississippi State. After the TD, Boyd looks into ESPN's live cameras and speaks the poetic, inspiring words that eloquently sum up the South Carolina philosophy and embody its spirit: "I'm back like cooked crack." 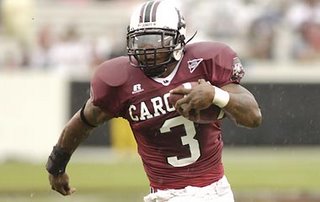 * This was a little funny ha-ha on my part. Everything else is absolutely true.
Posted by Astronaut Mike Dexter at 7:23 PM

Mm... that brawl brings back memories. The one thing UGA and Clemson can agree on is the utter suck-ass-ness of the other USC. (Though, I have to say, I'm a fan of black.)

The YMCA thing is true?!?

Come to Columbia this weekend so we can settle this like men -- going drink for drink until someone punches a mascot or vomits on their date.

Awesome, but I refuse to call it an A+ effort without any mention of Steve Tanneyhill and his rat tail.

"January 2, 1995: After 101 memorable seasons of football, the Gamecocks finally win their first bowl game -- and exact their revenge on West Virginia -- by blowing out the Mountaineers 24-21 in the historic Carquest Bowl"

I literally LOL'd at that one, because that's EXACTLY how they'd phrase it and we all know it.