Frank Howard would be proud.

Here's a story that's kinda-sorta related to football, but is probably more inspiring than any of the actual games that took place this past weekend: 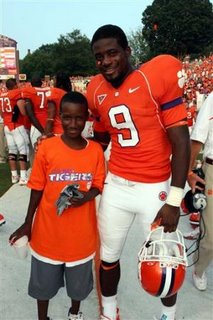 CLEMSON, S.C. -- The alarm sounds at 6:15 a.m. and Clemson freshman Ray Ray McElrathbey starts a routine like few others in college football.

Along with classes, film work, defensive back meetings and football practice, McElrathbey sees that his 11-year-old brother, Fahmarr, is dressed and fed, finishes his homework and makes it to middle school on time.

Ray Ray, 19, has temporary custody of his brother because of his mother's continuing drug problems and his father's gambling addiction. The two brothers have shared experiences in foster homes and now share an apartment by the campus.

Wow. In addition to his classwork and his responsibilities as a D-back on a top-25 team, this guy McElrathbey is pretty much a father to his 11-year-old little bro. And it's especially inspiring when you consider that his family apparently wasn't exactly bursting with role models for that kind of maturity. Kinda makes you realize just how easy and carefree your own life is.

The story says McElrathbey is seeking an NCAA waiver so that people can give him a hand with the cost of raising little bro without running afoul of improper-benefits rules. According to Tigerpundit, McElrathbey is getting the full support of the ACC in this effort, which has got to be a big boost to his chances. I wish him the best of luck. I'll try to keep tabs on whether the NCAA decides to grant him the waiver, and if they do, I'll post some info on where you can send donations.
Posted by Astronaut Mike Dexter at 7:52 AM

Wow. Very impressive. When I was at UGA, I didn't play football, skipped classes, and let my goldfish die.