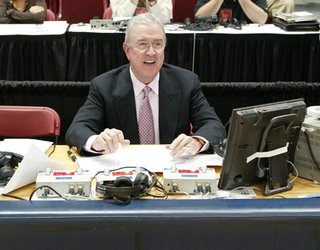 Yes, I know this is basketball. But he's awesome at that too!

Can it be true that ESPN has really demoted CFB announcer Ron Franklin from his usual Saturday prime-time slot on ESPN to the late-afternoon game on ESPN2? I don't understand the reasoning behind this, assuming there is any; it seems like just another needless plank in the Worldwide Leader in Sports's MTV-like plan to slowly but surely piss off and alienate all the people who faithfully supported them on their climb to the top.

This move won't be felt all that much this weekend, for, as these TV listings indicate, Franklin has been moved from likely a could-be-interesting-but-in-the-end-probably-not Florida-Kentucky game on ESPN to the could-be-interesting-but-in-the-end-probably-not Boston College-N.C. State tilt on the Deuce. But you can fully expect this void in your Saturday-evening football-viewing life to expand as the SEC season gets more and more intense and Franklin's absence from it becomes increasingly conspicuous.

Honestly, with Keith Jackson having retired, nobody in the business has a voice that more clearly means "college football" to me. Franklin's voice is deep, clear, and just Southern enough to be recognizable; he doesn't saturate his calls with a lot of meaningless facts or awkward jokes that thud to the ground like a Reggie Ball pass attempt. And it's his voice I remember from many a Saturday night in college and shortly thereafter -- after most likely coming home from whatever game Georgia had played that day, we'd switch on the telly to see what our hated rivals were doing before we headed downtown to get ripped that night, and it was Franklin who reliably told us. In the event that there was a road game I couldn't get to, Franklin was the one telling me what was going on. Sometimes these evenings were memorable for the wrong reasons -- I'll never forget the tinge of disbelief in his voice as he pointed out that Georgia hadn't converted a single third down in the course of their inexplicable, national-title-hope-killing loss to Florida in 2002 -- but there's just something about Franklin that makes you want him breaking the miserable news to you instead of, say, Todd Blackledge.

Come on, ESPN, if you're going to do Ron like this, you're going to have to give something back to your fans just to show us you still care. How 'bout you get rid of Big 'n' Rich and that hideous faith-in-God-sapping "Comin' to Your Ci-taayyyy" song in the intro to "College Gameday"? Or at least hook up Mark May to electrodes every Saturday and throw him about 500 volts every time he gushes about USC or Notre Dame? C'mon, Worldwide Leader, if your aim is to entertain us, entertain us.
Posted by Astronaut Mike Dexter at 7:58 AM

All of you guys and girls act like he turned water to wine. Which I think he was on a couple of times while announcing. He is going to another time slot. Shit, you act like he is covering pee-wee football. at 3:00 am in the morning. Get over it already, fuck!