I know the next Olympics are still a year away, but I was in a conversation the other night about sports or other activities that should be Olympic events, so that's what you get this week: Five Events That Should Be Added To The Next Olympics.

Pole dancing
This was the suggested event that got the whole conversation started, if memory serves. Scoff if you want, but there's a lot of athletic ability involved here, as the above video should demonstrate. And like, say, figure skating, it could involve points for compulsory moves (the spin, the slide down the pole, the hanging headstand) as well as artistic merit. Presumably the costumes would be excellent. And if it takes off, you could even add pairs or synchronized pole dancing down the road. 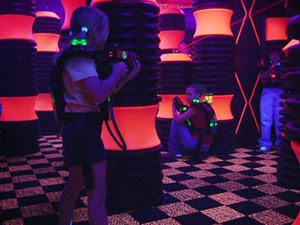 Laser tag
In theory, the biathlon at the Winter Olympics should be awesome: Contestants go skiing off through the woods, stop, and then bust out rifles and start shooting at stuff. It sounds like the opening to a James Bond film. But in actual practice, it's pretty boring, as they're just standing still and firing at paper targets. Laser tag wouldn't involve live ammo, obviously, but it would add that element of exciting that the biathlon is sorely lacking, as all of the athletes in a given heat would be shooting at each other. Last man standing in a each preliminary heat advances to the finals, and then the last man standing in that competition gets the gold. I mean, I'd watch -- maybe not as intently as the pole-dancing competition, but I'd still watch. 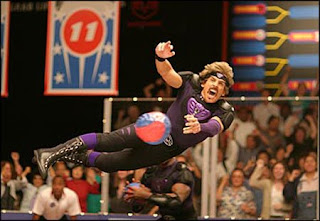 Dodge ball
After watching the Vince Vaughn/Ben Stiller movie from a few years back, the question I was asking was, why don't we have this as a major team sport, in the Olympics or anywhere else? I guess you'd really have to make sure your steroid testing is top-notch, though. 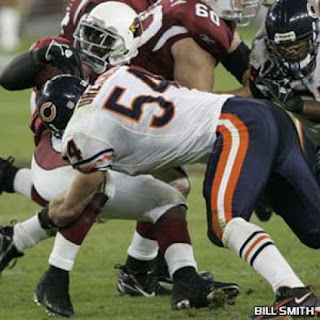 Football
A no-brainer, clearly. If the rest of the world gets to have their version of football in the Olympics, then we should be able to have our dramatically more awesome version. It's the greatest sport in the history of mankind, of course, and one in which Team USA would dominate on a regular basis, but there's another reason this is a needed addition to the Olympic canon: It would give American football fans the chance to prove once and for all that they can be just as loud, drunk, and obnoxious as football fans from soccer-hooligan powerhouses like England and Germany. (Actually, "football hooliganism" wouldn't be a bad addition as an Olympic sport, either, at least as an exhibition.) Skydiving
Lots of potential for both athleticism and artistic interpretation here, too, and you could even have a separate group competition where teams would try to do stuff like this. Points would be deducted for not sticking your landing and for your parachute not opening -- which sounds cruel, I know, but an athlete's equipment is his own responsibility.

Happy Friday folks. Put your own Tens and/or suggestions for Olympic additions in the comments.
Posted by Astronaut Mike Dexter at 8:06 AM

Even if the Olympics added all five of these sports it would still only be slightly more interesting than televised golf.

Wow. Why am I not surprised that a female Gator has a pole installed in her home to practice on? Hmmm. Maybe cheerleaders should use poles...

Olympic dodgeball would be a beautiful thing to see. Considering all the other random stuff they have (team handball? seriously?), why not? Paintball would be a good choice, too, although the electronics for laser tag would make it much easier to judge in case of near-simultaneous hits.

I'd love to see American football in there, but it'll never happen just because the USA could send the Detroit Lions and still beat the hell out of everyone else.

Awww, what happened to bass fishing??

Actually, there's been a humourous push to have pole-dancing included in the 2012 London Olympics.

As for the who has got the more intense fans: college football fans vs. soccer hooligans debate. Trust me you don't want to go there. Soccer hooligans tend to be real racists-as in throwing bananas at black players and racist chants, truly violent-think raiders fans on steroids. I personally enjoy my genteel college sports staying that way. Try experiencing the sectarian hate of Rangers-Protestant vs. Celtic-Catholic or the fascist supporters, the Ultra's of AC Milan, there are many, many other examples.

Doug, if you want to be man, play rugby XV's. American football, will always come up second against rugby, especially rugby XV's which is 90+ minutes of nonstop war, as in no commercial timeouts. Most rugby players don't think much of American footballers, with their helmets and body armor. Hopefully International Rugby will allow the XV's to play in the Olympics and you'll get to see real toughness and fan intensity. It would be great to see the All-blacks, Springboks, or even England win the Gold.

If the Winter Olympics can have something called "Luge", why shouldn't the Summer Olympics have "WaterSlide"? The only difference is that in one the water isn't frozen and they don't need a sled.

DUDE. This waterslide idea has legs.

That's what I'm thinking Miss Holly. I see no reason why luge should be admitted and waterslide not be. Plus the host city would end up with some bitchin' waterslides after it was all over.

Meanwhile back in DC, the messiash and his clowns are working on their change agenda:

Oh, good. Along with "the economy," "the environment," "FEMA" and "America's reputation amongst its allies," I guess we can now add "perfectly lighthearted, enjoyable conversations about wacky Olympic events" to the Great Master List Of Things Right-Wingers Have Ruined.

Oh, and anonymous comments are dead too, by the way. You want to be an assface, fine, but you're gonna have to own up to it.

It's not ruined yet Doug, but we need you to get on board and push for the Waterslide events (Slalom,Super G and Mixed Doubles)

But I fixed it.