I'm a consultant and I'm here to help: the Iowa State coaching search.

Well, HJS Consulting's next project was going to be finding a new coach for Mississippi State, but they took care of that pretty nicely on their own, so now we turn our super-sharp consultant's eye on Iowa State, who recently lost their head guy after Auburn went in a decidedly different direction from our recommendation. Well, their loss, because we think we've found a doozy for the Cyclones. Let's take a look. 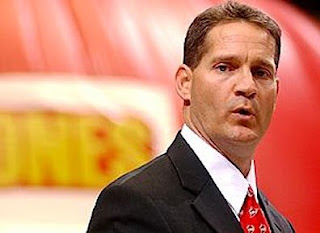 Previous coach: Gene Chizik.
Reasons for leaving: Auburn needed someone to replace Tommy Tuberville, and Chizik's sterling 5-19 (2-14 Big 12) record evidently made him irresistible.
What they need:
• An established coach with a name prominent enough to draw some attention to what has historically been one of the least celebrated programs in Division I-A, yet one who is willing to take on a formidable building/rebuilding task.
• Someone who is willing to work at a program with a reputation of being the "second banana" in its state.
• Someone with rural roots and an appreciation for small-town life. 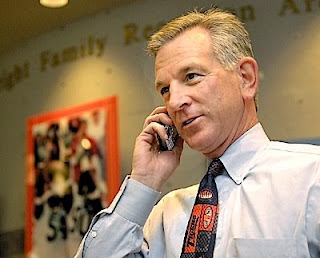 Tommy Tuberville
An authoritative CEO-type coach, Tuberville is one of the longer-serving and more respected coaches in D-IA, and if anything, that respect has only increased since his recent dismissal, even if only because of the way in which he was cast aside. In just two seasons, took Auburn from a 3-8 nonentity to an SEC West champion that earned a New Year's Day bowl invite, and did so in the shadow of an Alabama program that won the SEC title his first year. Previous jobs were in Oxford, Mississippi, and Auburn, Alabama, so presumably working in a somewhat remote town of 51,000 people would not bother him. With his defensive background, might implement a smash-mouth style of football that would be an interesting change of pace from the finesse offenses that have typified the Big 12 of late.
Caveats: Not known for fostering a great deal of loyalty or continuity amongst his assistant coaches, though that hardly appeared to be a strong suit of the previous ISU coach, either. Probably still complaining about being left out of the 2004 national-title game. Beware any supposedly emphatic statements about "pine boxes" or the like; past connections to the Auburn job, in particular, make him a prime candidate to take that job when it comes open in a couple years.

Next up: Army, who jettisoned Stan Brock after only two years and who would be content just to get within two touchdowns of Navy every once in a while.
Posted by Astronaut Mike Dexter at 8:39 PM

That would blow the Houston Nutt to Ole Miss thing last year out of the water.

I might not stop laughing all year next year if it happened.

There is still a better chance for Palin to be coaching Auburn next fall than Tommy T. going to Iowa State ... but I would love to see this!