Lost? Confused? The Old School Plus One is here to solve everything. 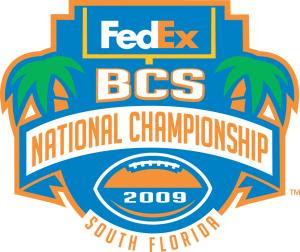 Wow, that color scheme isn't the least bit biased, is it?

Back in the summer, as the 2008 college-football season approached and the debate over the BCS got hot once again, I proposed a system I called the "Old School Plus One" to replace the current BCS system. Basically, it'd work like this: The BCS and its roundabout computer formulas would be scrapped, along with all the rules governing which bowls were required to pick which teams in which order. All the bowls would be free to lock in the same conference champions they'd been associated with all throughout the pre-Coalition years (i.e. the Sugar Bowl takes the SEC champion, the Rose takes the Pac-10 and Big 10 winners, etc.), but as far as at-large teams it'd be every bowl for itself, free to invite any team from any conference as long as that team wasn't already committed to another bowl. All the bowls would be played, and then the AP sportswriters (or, if deemed necessary, a blue-ribbon Harris Poll-like collection of writers, coaches, ADs and the like) would submit another round of top-25 ballots. And the #1 and #2 team in that balloting would face off in a National Championship Game that would be held in a different city each year, with cities bidding on each year's game much like they now do for the Super Bowl. And the winner of that game would be the national champion for that year.

That explanation is probably more complicated than it needed to be, so by way of illustration I went back through the first few years of the BCS system and projected how the "Old School Plus One" would've played out in each of those situations. Sometimes the Old School Plus One led to a much better and more satisfying outcome, sometimes it was pretty much the same as what the BCS actually came up with, but rarely did it produce something worse.

Now, in 2008, we have another BCS controversy, one that might not be as bad as some of the others we've experienced over the years but one that still has a lot of people hacked off: Florida and Oklahoma are in the national-championship game, and Texas is on the outside looking in, getting locked out of the Big XII title game (and thus the national championship) despite having beaten Oklahoma in the regular season. Could the Old School Plus One sort this all out? I'll do the rundown of this year's situation pretty much like I did the others. 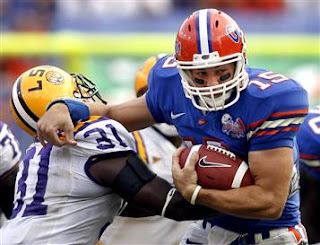 Georgia, Southern California, Oklahoma, Texas, and Alabama all spend varying amounts of time in the #1 spot over the course of the season, but in the week leading up to the conference-championship games, it's Alabama #1, Florida #2, Texas #3, and Oklahoma #4. However -- and things start to get tricky here, because this is where alternate reality under the Old School Plus One begins to diverge from the actual course of events -- with there being no such thing as "BCS rankings," the Big XII can't use that to sort out the three-way tie atop the South Division and determine who will represent the division in the conference-title game. So, presumably, they would pick the top-ranked team in the human poll -- which is Texas. The Longhorns handle Missouri in the Big XII title match and, with #1 Alabama having fallen to the Gators beforehand, the rankings on Sunday morning are what you see above.

Sugar: #1 Florida (12-1) vs. #3 Oklahoma (11-1)
With Texas already locked into the Fiesta as Big XII champion, the Sugar jumps on third-ranked Oklahoma.

Fiesta: #2 Texas (12-1) vs. #4 Alabama (12-1)
The Fiesta picks a higher-ranked (and more tradition-rich) Alabama squad over Utah to go up against the Big XII champions.

Orange: #21 Virginia Tech (9-4) vs. #10 Ohio State (10-2)
This one's tricky. Would the Orange Bowl take a look at an undefeated, seventh-ranked Utah squad to fill the slot opposite the ACC champs? Possibly, but that's a long way for Ute fans to travel, and I think the lure of an unimpeachable brand name and a guaranteed sellout with the Buckeyes would be too much to pass up. That'd probably give them the nod over Texas Tech, too, though the Red Raiders have a better record and a higher ranking -- and with no BCS strictures in place to determine which bowl can invite which teams, theoretically the top bowls could invite as many Big XII teams as they wanted.

WHAT (I THINK) HAPPENS: With all due respect to Southern Cal and Penn State, there are really only two games that are likely to matter here in terms of the eventual national-title matchup, and those are the Sugar and Fiesta bowls. So with that in mind, I guess there are four possible outcomes.

Florida wins the Sugar, Texas wins the Fiesta: Both the SEC and Big XII champions hold serve in their bowl games, remain #1 and #2, and get matched up in the national-title game.

Florida wins the Sugar, Alabama wins the Fiesta: With Oklahoma and Texas both falling, Alabama moves up into the #2 slot and the national-championship game is a Florida-Alabama rematch.

Oklahoma wins the Sugar, Texas wins the Fiesta: Texas and Oklahoma likely move up into the #1/#2 slots in some combination, and the national championship is a rematch of the Red River Rivalry.

Oklahoma wins the Sugar, Alabama wins the Fiesta: Both conference champions fall, leaving the #1 and #2 spots to a team that wasn't included in their conference-title game but had a reasonable argument to be (Oklahoma) and a team that was included but lost a relatively close-fought contest (Alabama).

Obviously, the first of those four outcomes is the only one that would satisfy everyone. A rematch of a regular-season game would piss some people off, as would a matchup between two teams that didn't win their conference-championship games. But if, say, Florida and Alabama each knocked off top-4 opponents in their bowl games, then it'd be hard to deny that they're the best two teams in the country, rematch or no rematch, and deserving of inclusion in the national-title bout; same if Texas and Oklahoma won their bowl games. And while Gator or Longhorn fans might complain about having to play a team they'd already beaten before they could earn the national championship, the answer to that is fairly simple -- if you beat 'em before, you should be able to beat 'em again.

At any rate, the point of this system is not to avoid rematches, it's to ensure that a) fewer teams with a reasonable claim to a national-title berth get denied a fair shot, and b) the ultimate national-title-game pairing is determined by play on the field and not by a bunch of decimal points and absurdly complicated computer formulas. Which, warts and all, it would accomplish this year.

Obviously, though, it's still not perfect, and though no system would be perfect, there may be ways to make this one better. What do you think? Is there anything you'd change?
Posted by Astronaut Mike Dexter at 7:53 AM

Email ThisBlogThis!Share to TwitterShare to FacebookShare to Pinterest
Labels: football, the old school plus one

When Alabama can have the season they had, barely lose to that pains-me-to-say-it-fantastic Florida team, and end up in an exhibition game against Utah, something ain't right. (As a Georgia fan, I know the feeling. Fucking Hawaii.)

I'll tailgate, I'll go to games when the prices aren't exorbitant, and I'll still root for us to turn Tim Tebow's legs into a fine calcium dust next year. But my heart won't be in it as much.

I pray for a fan revolt. I pray people wake up and realize this bowl business is just ONE GAME surrounded by a bunch of meaningless crap. Until the charade of the BCS ends and we get a real playoff (at least 8 teams, not dependent on fraudulent conference championships), the NFL will feature the better product.

How "old school" are you talking about here? If you're going "old school," the Big 12 champion goes to the Orange Bowl, not the ACC champion. That whole "Fiesta is the Big 12 champion" thing only happened during the BCS era. And if you're talking REALLY old school, the Cotton Bowl is the fourth big one, and the Fiesta Bowl is a Citrus-level (screw you, Capital One) bowl.

So, really, your Texas-Alabama matchup should be in the Orange, and the Fiesta would probably match (I guess) Ohio State and Utah, it being under no obligation to do anything with the ACC champ. Now that would be old school.

I'm not going to go the route of the depth of "old school" you're thinking that Tom does, but things would be more complicated than the neat 4 proposals you've proposed Doug.

In the situation you laid out...

What if USC absolutely dominates Penn State and the other games end up ugly, close games? You don't think there would be a movement to move USC up to #2? Or what if Penn State absolutely dominated USC? And where is Texas Tech? What if they get matched up with Utah or Boise State or some other deserving team and absolutely throttle them that makes their lost to OU look like an aberration?

The season just won't come out neat no matter what. Texas, TT, and OU all have losses to each other. UF beat Alabama, so I think Alabama should be out of the discussion. USC and Penn State both won tough leagues and deserve their shot, right?

This is one of those years that I think the plus-one might create even more controsversy.

Doug, I think you're assuming that a jilted Texas team is motivated enough to show up at the Fiesta Bowl against a tOSU team that that is looking for some respect.

It's more likely that Texas will beat tOSU, but I've seen enough teams like Oklahoma not show up for multiple BCS games against supposedly inferior teams, so I'm not discounting the possibility that the BCS could become even more complicated.

Regardless, the BCS is proving to be even worse than what came before.