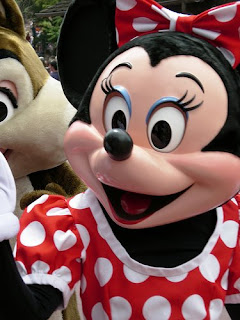 You can find some very interesting things going through practice reports, and I found a good one whilst digging around for info for the Michigan State preview below. Peep this nugget from the end of Macon Telegraph blogger David Hale's Saturday practice notes:

-- Georgia's players visited Disney World on Saturday, something [Asher] Allen said he hadn't done since he was 8 or 9 years old. The cornerback said he had good memories from his last trip, however, and was hoping to relive a few this time around.

"I'll talk to Minnie Mouse," he said, "and rekindle some flames."

"Rekindle some flames," huh? Wow . . . first the revelation that Knowshon Moreno is a Lego enthusiast, now we have Asher Allen revisiting his grade-school dream of gettin' his swerve on with Minnie Mouse. Maybe we can hope this childlike enthusiasm will carry over into the Capital One Bowl itself, and we'll tackle with abandon like a bunch of nine-year-olds convinced of their own invulnerability rather than like a bunch of geriatrics who are loath to make full contact for fear of breaking a hip.

And I say all this as someone who has vague memories of a crush on Smurfette circa age four or so, so it's not like I'm judging here.
Posted by Astronaut Mike Dexter at 7:53 AM

Thank you very much for the Swingers quote. Any quote from that flick is a small way to make the day better.

Has Asher Allen set an unbreakable NCAA record for Called For Interference When He Was Actually Interfered With?

I'm not whining, because you still have to win the game. And I thought the celebration was cool. But when the refs assessed two celebration penalties, you could see it coming. But for a whole season? Grounding, one called outrageously incorrectly, one uncalled when it was obvious, were the gist of the Tech game.

And thank you incompetent NFL teams for sending college kids back to college. Happy New Year.

Hey, did you hear I went undefeated in my fantasy football season? Huh? Did you hear?