War eagle, fly down the drain.
(Updated with additional piling on.) 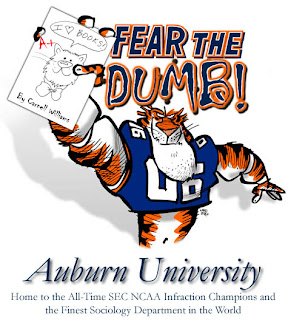 If Sunday Morning Quarterback/Dr. Saturday will permit me to steal a little bit of his steez here, I have a question for all of y'all football fans out there.

Coach A has 28 years of experience in coaching, including a few years in the NFL, and has been a head coach since 1995. He is 110-60 lifetime as a head coach, 52-30 in SEC play, has an SEC title and won at least a share of five division titles total. Four of his last five teams have finished the season ranked in the top 15, and one of those teams finished a perfect 13-0 with a Sugar Bowl win.

Coach B has 18 years of experience in coaching, the last two of which he has spent at his first head coaching job. He is 5-19 over those two years, 2-14 in conference play, and has finished no better than fifth in a six-team division. He is coming off a 10-game losing streak to finish the 2008 season, during which his team was winless in-conference.

ADDED, by popular demand, and by "popular" I mean a couple people who laughed when I told them this: I'm proposing that a new word be added to the Oxford English Dictionary.

2 to effectively give up or admit defeat by submitting a careless, ill-considered solution -- syn PUNT

Where did you put the tickets? Our flight leaves in less than an hour
Umm, uhh . . . chizik

Son, what is this we found under your bed? Who taught you to do this stuff?
Dude, I don't know, chizik

Just when you think they can't up the hilarity stakes any more after interviewing Patrick effing Nix...I gotta hand it to Auburn; they can know their way around a joke.

You know it's a bad hire when other SEC schools' fans are outraged too. It devalues the whole conference.

If they were gonna go out and make a hire, they should have went with someone that at least knows something about winning as a head coach. Turner Gill would have been a good hire, even though he would be making a major step up from Buffalo, but who is to say that you can't win at Auburn just because you can win at Buffalo.

I think on Friends they called that "pulling a Monica."

If I were Turner Gill I would not take the Iowa State job if they offered it to me. He deserves a shot at a decent program ... but then again, if you can win the conference in your third year at Buffalo, then anything is possible. The only thing I am sure of is that Auburn will not be heard from for at least 10 years.

You wanted Obama for prez but Chizic ain't qualified to be Auburn's head coach?