UPDATE: As requested, I've factored in Phil Steele's preseason top 25 (released just yesterday as far as I know). The new rankings can be pored over at this post.

The regularly scheduled Friday Random Ten will not be seen tonight so that we may bring you this special presentation, because football season is but 90 days away and I felt like celebrating in my own wonky, statistics-laden fashion.

The pundits and preseason publications are all hard at work assembling their top-25 predictions for the 2007 season, and enough of them are out there at this point that I decided to gather them all up and throw 'em together to see what kind of overall hierarchy shakes out. In fact, Jennifer from Girls Gone Tailgating already did this a couple weeks ago, putting together eight preseason top 25s for what I can only guess was the sole purpose of demonstrating to the world that Southern Cal is number one with a bullet, bitches, so you better bounce up and act like you know. Since then, a couple more rankings have been released, Athlon and Lindy's being among the more prominent, so using Jennifer's tally as a jumping-off point, I threw a few more lists into the mix and added 'em all up.

I'm actually kind of Internets-retarded, certainly too much so to put a table on this blog, but you can find the full, detailed rankings here in a Google spreadsheet. The aggregate top 25 is as follows:

Here's a key to the various rankings that were used, in order of when they issued their rankings (since obviously the more recent ones are a little more solid than those that came out right after the '06 national-title game):

Things that jump out at me:

• Apparently a lot of people have managed to not be all that impressed about Nick Saban's arrival in Tuscaloosa, because Alabama placed in exactly one list (ESPN's), at a Shulaesque #25, no less. That kind of wariness makes sense with respect to a 6-7 team whose secondary is a major question mark, I guess, but I still figured Saint Nick's star wattage alone would be enough to muscle the Tide into a few more polls. 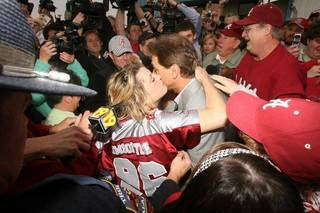 Colette Connell's outpouring of love for The Saban was, sadly, not to be repeated by the nation's pundits.

• Apparently a lot of people have managed to be all that impressed by USC, because all 12 of these lists have the Trojans ranked #1 with a bullet. While not as surprising as Alabama's absence, the unanimity surrounding USC is still a little surprising considering how much experience they've lost at the offensive skill positions, other than QB, of course. (Speaking of which, I'd like to point out that John David Booty bears an uncanny resemblance to Jake Wyler, the QB played by Chris Evans in "Not Another Teen Movie.")

• Alabama's non-presence aside, the pundits do seem to have quite a bit of confidence in the SEC, as no fewer than seven SEC teams made it into the aggregate top 25 and another two (Kentucky and Bama) received votes. Not getting much love: the Pac-10, which has USC at number one and UCLA and Cal in the teens but only one other team (Oregon State) receiving any votes at all. Also experiencing a withholding of affection is the ACC, which, after a fairly dismal 2006, has only one team (Virginia Tech) in the top 20, two (Boston College and Wake Forest) hanging around at the bottom of the top 25, and four more (FSU, Georgia Tech, Miami, and Clemson) in the "others receiving votes" category.

• Speaking of the Pac-10, UCLA seems to be the most controversial team in the poll, at least if you go by the divergence of various people's votes. Three lists (CBS, CFN, and the Times-Picayune) have the Bruins in the top 10; four (CSTV, ESPN, Stewart Mandel, and Lindy's) have them hanging around in the 20s; two more (Rivals and Tony Barnhart) apparently saw no reason to put them in the top 25 at all. In other words, the all-over-the-map rankings mirror UCLA's all-over-the-map performance during the Dorrell era, and there seems to be a fairly widespread consensus that while the Bruins should be good, there's no telling whether they'll actually live up to that potential. I'll stop now before the vein bulging out in the middle of Nestor's head explodes. 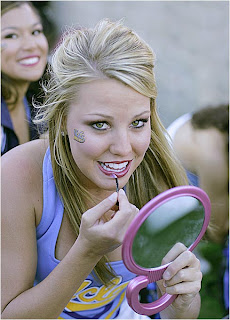 Some aspects of UCLA's program, on the other hand, inspire widespread consensus.

• Other teams people apparently aren't too sure about: Ohio State, ranked anywhere from #3 (nationalchamps.net) to #21 (CSTV and the Times-Picayune); Cal, ranked in the top 10 by CSTV and ESPN but stuck down at 20 by Stewart Mandel, and nowhere to be found on Tony Barnhart's list; and Auburn and Tennessee, both ranked anywhere from #7 to the mid-20s.

• Another team somewhat conspicuous by its absence, though not nearly as much as Alabama, is the Oklahoma State Cowboys (not coincidentally Georgia's first opponent for the 2007 campaign). It seems like the 'Pokes garnered quite a bit of buzz from the blogosphere as the 2006 season drew to a close, but apparently that hasn't quite filtered down (or up?) to the pundit class yet, as OSU only received a single #25 ranking (from Tony Barnhart).

• Completely voteless, and surprisingly so: Oregon, a regular (or at least semi-regular) top-25 inhabitant over the last few years; Missouri, whom many people thought was finally turning the corner under Gary Pinkel after being just a couple plays away from a 10-win season in '06; and BYU, who's finding that an 11-win season only earns you so much street cred when you're having to replace a second-round-draft-pick quarterback. 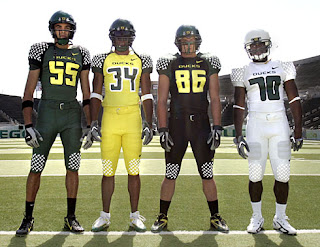 Sorry, Ducks, the only list I've seen you on so far is Mr. Blackwell's Worst-Dressed.

• While las cronicas de Boss Hawg have made Arkansas a frequently used punchline all over the country, they actually haven't dampened many people's enthusiasm for the 2007 team's prospects — only two lists (Athlon and the New York Post) left the Hogs off entirely, while two others (CFN and Barnhart) have them in the top 10. Could it be that not all that many people really think Gus Malzahn and Mitch Mustain were all that big a loss? Makes sense to me, though I still think #14 in the country could end up being a little generous. 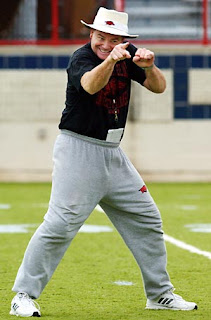 • Notre Dame, out of the top 25 entirely and sitting behind such luminaries as South Carolina and Florida State. I'm sure there are people all over the country who are delighted with this, yet I have a sneaking suspicion that the Irish will have begged, borrowed, and stolen their way back into the top 25 by the time the actual ballots are tallied up for the first preseason poll in August.

• And finally, there sit my beloved Bulldogs at a nice healthy #15 — high enough that nobody can laugh at them, but low enough that they won't have huge bullseyes on their backs. The defense still worries me, a lot, but who knows? If Stafford has continued to progress the way he did over the last three games of '06, maybe they really will be able to just outscore everyone this year. 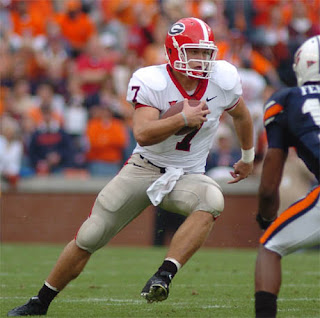 It is a great place for YOU to find and create lists about anything and everything.

Well said D Gizzle, but you're not off the hook:

1. "In Love" by Thievery Corporation, from 'Versions'

2. "Pot Pourri" by Olodum, from 'Felicidade"

3. "E.T.(Extraterrestrial)" by Outkast, from 'ATLiens'

8. "Family Business" by Kanye West, from 'The College Dropout'

Put that in your pipe and smoke it, listafterlist.com dude...

A Happy Weekend to all.

I love Not Another Teen Movie. Seriously.

You're right to be suspicious of USC's need to fill in experience in the receiving corps, as well as develop a better running game. I suspect that a lot of the love is driven by 1) looking around and not seeing too many obvious other candidates, and 2) lazy thinking. Ranking SC high isn't exactly betting the farm on a dark horse, but if it all implodes then writers can write it off to failure to live up to (their) expectations about development and coaching. And it also incites other fans, thereby generating page hits. Not that I'm cynical or anything.

You've got Alabama backwards - the secretary should be fairly strong, but the rest of the defense is a huge question mark.

Umm - secondary, not secretary. I hope I wasn't unconsciously referring to some sort of Dubose situtation.

UCLA's divergent rankings are based on two primarily different ways of thinking about the program:

1) We'll rank UCLA highly because they have a lot of talent and potential to be very good.

2) Oh, we forget Karl Dorrell was coaching the Bruins. Nevermind.

please update using the newly released phil steele rankings too, he's usually right about sec matters and he has us starting off the year 11th, and auburn way down in the 40s, heh.