Obituary, and the Friday Random Ten. 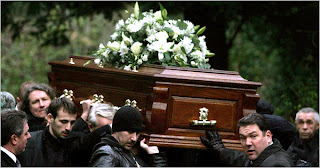 BIRMINGHAM -- Doug Gillett's 20GB clickwheel iPod, a faithful music provider ever since its purchase in March 2005, was pronounced dead earlier this week after a brief bout with an as-yet-unspecified illness.

After several weeks of intermittently locking up and needing to be reset, the iPod locked up permanently last Friday and was brought in for treatment. Attempts to resucitate the device were unsuccessful, and Gillett formally ended life-support efforts on Wednesday.

"I just thought it was the right thing to do," a tearful Gillett said. "I'm going to miss it, and it's going to be tough listening to music now without it, but sometimes you just have to know when to let go. And I decided this was the time."

Neither Tom DeLay nor Bill Frist, oddly enough, could be reached for comment.

Friends recalled the iPod being the life of the party for numerous parties, road trips, and listenings of various Richard Cheese alt-rock parodies, German gangster-rap songs, and filthy Dave Attell comedy bits. "It also had, like, more than 300-something Pet Shop Boys songs on there alone," said an acquaintance who asked not to be named. "I don't know how it managed."

The iPod is survived by Gillett, 29; its longtime companion, a Dell Inspiron notebook, 1; a Sony Discman, 8; 3,287 songs; all 21 episodes of the first season of "30 Rock"; and a Dave Chappelle comedy video.

In lieu of flowers, Gillett requests that donations be given to the Buy Doug A New 80GB Video iPod Fund. Donations can be made through PayPal at paris_1968 (at) hotmail dot com.

What a long, strange trip it's been. iPod, iSalute you, and iThank you for your service. Now iSend you out with a ceremonial Friday Random Ten.

And what the hey, a bonus 11th that really shows the depth of my music collection's depravity:

Sorry, I'm . . . I just need a moment right now. I'm sorry. While I'm pulling myself together, put your own Tens (and condolences) in the comments.
Posted by Astronaut Mike Dexter at 8:04 AM

You heartless bastard. I saw a video of your iPod, I watched for about an hour, and that thing was fine. Perfectly reparable. You just wanted it out of the way so you could get a video iPod.

I hope you don't have to endure too long a mourning period. I dressed in black for my old iPod for the length of time it took me to get to Best Buy and replace it - some things are too central to my day not to be replaced.

This is only tangentially related: we had a recent spike in mortality in the kids' fish tank and my not-quite-5-year-old wanted to bury one of the casualties. She found a stick, and told my wife that she wanted to write something on it, and mark the grave. The missus was curious to find out if the fish was going to be given a name post-mortem, or what. Our little charmer then asked her, "Mommy, how do you spell 'dead'?"

Anyway, my ten are as follows:

1) The Man with the Dogs, Dead Kennedys
2) Let it be, the Beatles
3) Underdog (save me), Turin Brakes
4) Song to te Siren, Chemical Brothers
5) Kappa, Mogwai
6) Hot ft. Pusha T, Rosco P. Coldchain
7) Sweet Dreams (are made of this), Eurythmics
8) The Hardest button to button, White Stripes
9) She's got spies, Super Furry Animals
10) Contact, the Police

In honor of City Stages #19 (I've been to all of em)which starts tonight, here is my 10 from my City Stages playlist-all bands who have played Stages over the years.
1. Def Leppard "Photograph"
2. Eddie Kirkland "Walk in the Dark"
3. Dave Alvin "Fourth of July"
4. Owsley "I'm Alright"
5. Robert Bradley's Blackwater Surprise "Ride"
6. Richard Thompson "Crawl Back (Under My Stone)
7. Drive-By Truckers "Road Cases"
8. Holleycarbines "Winnona Ryder"
9. Stellastarr* "My Coco"
10. The Derek Trucks Band "Crow Jane"
and bonus 11-the late great Topper Price "Nature"
I am going to miss Topper Price at City Stages this year he had been a fixture around Birmingham for a long time.

I’m deeply sorry for your loss. I’ve had my pre-click-wheel-era iPod for three years now and it’s still going strong. Much like my beast of a car, I doubt it will ever die and give me an excuse to get a new one.

Sorry for your loss Doug, but from the sullen ashes in your soul a new phoenix will rise, and that phoenix will have a name: 80GB iPod.

Shit, you are probably nowhere near a n Apple Store, but they give you 10% off your new iPod if you recycle your old one with them, and since it's dead that sounds like a no brainer. For $40 it might be worth your while to look online or call and see if you can hook that up over the phone.

"It's So Hard To Say Goodbye To Yesterday" and "End Of The Road" by BoyzIIMen came to mind, but they aren't in my iPod.

I am sorry for your loss. Just don't with cremation, that could be dangerous.

I sold my broken U2 iPod on eBay for $70. I listed exactly what was wrong with it, and started the bidding at $9.99. Apparently a lot of people out there are looking for broken iPods to refurbish and sell for profit.

First time I've ever done the Random Ten, and on this solemn weekend of the loss of the iPod, they don't really seem too random. I'm the type who preps for the worst, and I can't imagine a day w/o my iPod now. Good luck, and best wishes.