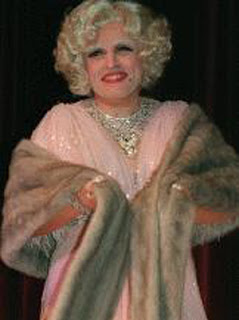 And yet John Edwards continues to catch shit for getting an expensive haircut.

Do y'all remember the creative writing contest I held last month in which readers were invited to conjure up hypothetical conservative reactions to Hillary Clinton blowing off a planned campaign event in Iowa because the hosts didn't make enough money? (Hypothetical because it was actually Rudy Giuliani who did that?)

That was fun, wasn't it?

Well, get your creative juices (and your mad right-wing-pundit-impersonation skillz) flowing, because I'm throwing another one. Your mission, should you choose to accept it, is to write a hypothetical right-wing opinion column, blog post, or talk-show rant skewering Hillary if she was at the center of this:

Rudolph Giuliani's membership on an elite Iraq study panel came to an abrupt end last spring after he failed to show up for a single official meeting of the group, causing the panel's top Republican to give him a stark choice: either attend the meetings or quit, several sources said.

Giuliani left the Iraq Study Group last May after just two months, walking away from a chance to make up for his lack of foreign policy credentials on the top issue in the 2008 race, the Iraq war.

He cited "previous time commitments" in a letter explaining his decision to quit, and a look at his schedule suggests why -- the sessions at times conflicted with Giuliani's lucrative speaking tour that garnered him $11.4 million in 14 months.

Feel free to launch any attack you think a right-winger might make. Hillary doesn't care about national security! Hillary doesn't even show up for her job! Hillary is basically giving the bird to the American taxpayers! Actually, this time I don't even care whether you make it about Hillary. Pick Obama, Edwards, Kucinich, seriously, go nuts. Just conjure up something as snide and/or hate-filled as you possibly can -- keepin' it real, of course -- and throw it in the comments.

Your mission, should you choose to accept it. But if you do accept it, fuckin' follow through on it, know what I mean?

Or if that's too similar to the last contest and you're jonesing for a new challenge, simply come up with an answer to this essay question:

Other than the fact that he happened to be mayor of New York on 9/11, what possible attraction could there be to the Rudy Giuliani campaign?

Your move, readers!
Posted by Astronaut Mike Dexter at 8:17 PM

Well, friends, they've done it again. I don't know if you've been paying attention to any of the Democrat debates, I know I can barely stomach them myself. But if you have, you've undoubtedly been hearing the simpering adherents of convienient pacifism tell us all how much better they could be running things in Iraq. That's right, the same party that wants to spend your money on beggars and welfare thieves instead of the United States fighting men and women, wants you to believe that everything is going to hell, and they can save us.

The loudest of these pandering slugs is undoubtedly Hussein Obama, a coke-snorting lawyer who has as little experience in public service as he did staying sober in whatever university he attended. But here's the rub, friends, and I want you to remember this when he tells you how the war should be won - He declined to be a member of a group dedicated to solving that problem.

You heard me right. The Democrats' golden boy, screeching demagogue of the supposedly hopeless, quit his post as a member of the Iraq study group. Can anyone remember another example of such gross hypocrisy? This is a man who was invited to the table by the Republican party to help solve this crisis, and he said no. No.

Some of you may be asking why he did this. Why, you say, would a man so dedicated to solving the middle east turn down the opportunity of a lifetime to get his hands in there and work on it? Why not back up his outrageous words with some across-the-aisle problem solving?

I'll tell you friends. Because showing up to participate in that particular group - and he never, ever attended even one meeting - would have meant turning down 11.4 million dollars in speaking engagements. What else can I say? This is the man the liberals ask us to nominate for this country's highest office. President Osama would like to apologize to the Joint Chiefs of Staff for missing thier national security briefing, he was collecting some cash at a dinner in New York. Unbelievable the things these hypocrites will do. Truly stunning.

So just remember the next time Hussein starts droning about the problems we've got in the desert - he already had his chance, and he'd rather fill his already sagging pockets.

Other than the fact that he happened to be mayor of New York on 9/11, what possible attraction could there be to the Rudy Giuliani campaign?

Nobody understands the sanctity of marriage better than Rudy. He has been through several of them, just to be sure he fully understands.
That and the Seinfeld yougert episode are his 2 biggest attractions.

Hmmm. Attraction to Rudy? Positions are unfortunately ever changing, but lower taxes, pro-choice and gay rights are okay. Plus, he's not stupid enough to declare that the earth is only 6000 years old. Clearly he's a capitalist, and the Seinfeld ep doesn't hurt. How's that for a tepid endorsement?

Since there appears to be no rule preventing me from using the same piece as Creative Writing Contest I, I will do just that:

It always smacks of either hypocrisy or homophobia when liberals post that "drag" photo of Giuliani out like it's something to be ashamed of.

Aren't you guys supposed to be the party that doesn't care about those things?

By the way, the last time I checked, all of those Democrat nominees you mentioned were current elected officials. Why should Giuliani - currently a private citizen - be expected to donate his time to a group instead of making his own income?

Just because that writer said it would give him a "chance to make up for his lack of foreign policy credentials" doesn't necessarily make it so. In my experience, "study groups" are largely a waste of time.

"Why should he be expected to donate his time"? How about because he freaking agreed to do it?

Nobody put a gun to Saint Rudy's head and forced him to join the ISG. He said he would do it, and after he'd already expressed interest in running for president, no less (rendering moot his excuse about not wanting the group to turn into a "political football"). Nobody made Rudy do anything he didn't want to do; he said he would serve on the ISG, then flaked on that promise.

As for the drag photo, I simply think it makes an interesting contrast to those breathless hosannas from the GOP about what a tough manly man Rudy was in the wake of 9/11, plus it really makes the evangelical fundies squirm; those are the only reasons I posted it. So let's leave the "homophobia" accusations out of this, k thx.

2) You've decided to stoke evangelical homophobia instead of fight it or try to dampen it.

3) It's an inexcusable offense to agree to something, and then change one's mind.

1) Dressing up in drag doesn't correlate well with an attempt by Giuliani to run as the nation's father. There are doubtless plenty of cross-dressing fathers in this fine nation, but most of them are not trying to build a public image of traditionalist authority...

2) I think you've got that backwards. The Republican candidates expressly pander to the stone-age social conservatives. Posting a picture of Giuliani in drag is social-conservative-judo, where you use their prejudices to get them riled up against someone who wants their vote.

3) Either you mean it when you volunteer to do something, or you don't. Giuliani signed up for it and only left when he was told to go - which is a little different from changing one's mind. There's nothing wrong with earning a living, but if you only show up for cash, don't pretend otherwise.

"Dressing up in drag doesn't correlate well with an attempt by Giuliani to run as the nation's father."

I assume you know this, but not only was that picture taken pre-presidential race, it was taken pre-9/11. It was an attempt at humor, and the left has reveled in people's homophobia by plastering it everywhere they can. Just like I said: the decision has been made to enflame bigotry against homosexuals instead of attempting to correct it. All in the name of presidential politics.

Josh, you can get as hyped up about this as you like, but if right-wingers can continue to laugh at John Edwards and call him the "Breck Girl," then I will have no qualms about laughing at Giuliani when he looks like an actual girl.

Hey, just curious. Did any of you actually live in New York City when Rudy was mayor? I had the privilege of being here for his entire eight-year tenure, and it was no bed of roses. The guy had a serious issue of "playing well with others" and did a lot of pointless antagonizing people/groups he should have been working with.

Basically, he had the luck of coming into a city that was already on the upswing, in terms of crime reduction and a booming economy. I certainly don't give him credit for "cleaning up New York."

And since you're arguing over that drag photo, I can say that most New Yorkers gave that a passing glance and said, whatever. I find it amusing when it resurfaces, because it's so damn passe. Sorry, Doug, you could do better.

"not only was that picture taken pre-presidential race, it was taken pre-9/11"... And as far as we know he hasn't moved his mistress into the home he shares with his wife since 9/11 either. Does that mean we can forget all of his moral short comings while he courts the conservative voters as they occurred before 9/11? And how does that get him out of his promise to serve on the 9/11 commission since I am pretty damn sure that has been since 9/11?

Briefly for Doug though, if you think he "looks like an actual girl" I would beg you to get out of Alabama.