Who you should feel sorry for this week. 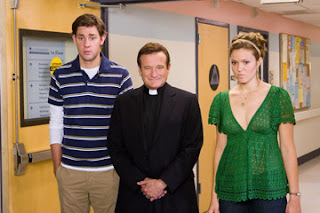 (First in an occasional series.)

Last week we were supposed to be pitying Paris Hilton for having to serve actual jail time despite being a hot white chick. When people got over that, it was then Scooter Libby we were supposed to be pitying, because after all, he didn't commit an actual crime -- he just committed perjury and obstructed justice and stuff. (Oh, please, like you've never done it.) Some asshole named Fouad Ajami even went so far as to call Libby a "soldier in [the] war in Iraq" in his demand for Scooter to be pardoned. Yeah, those guys risking their lives in Baghdad are a dime a dozen, but West Wing desk jockeys like Scooter Libby -- fuck G.I. Joe, there's your real American hero! (Maybe Ajami's been spending too much time with Kellen Winslow Jr. or something. Your guess is as good as mine.)

But the person you should really be pitying right now is John Krasinski.

You may know him as Jim, the nice guy from "The Office." He's kind of got a bit of that Zach Braff quality to him, what the French call that certain I don't know what, that makes you want for him to be blessed with a long and illustrious film career in which he gets to play many characters every bit as quirky and kickass as Jim. Well, the good news is he's got himself a film role; the bad news is it's in "License to Wed," in theatres next month.

The main antagonist to Krasinski's character in "License" is played by Robin Williams, and there are those who would say that Robin Williams's presence in this film is all the indication you need that it's going to suck. For instance, me: I would say that. (Has he appeared in a comedy in the last decade that didn't blow harder than the wake turbulence jet blast from a 747? Go on, think about that one for a minute.) In fact, I think it's fair to say that this movie goes beyond the unfunny and deep into the intelligence-insulting. The running gripe about mainstream Hollywood flicks these days is that "they put all the funny stuff in the previews," but man, if that's what they did for this movie, they're in deep ka-ka indeed.

I saw the trailer to "License" when I went to see "Knocked Up" -- which is fricking awesome, by the way, and I'll get around to discussing it soon -- a couple weekends ago. Every movie trailer has a "money shot," a scene or segment usually saved for near the very end (often right before the title card) that is supposed to be so funny, sexy, action-packed and/or heartwarming that you just have to go see that film. I'm going to narrate the one from the "License to Wed" trailer now. The scene is set up by Krasinski somehow getting nailed in the head by a baseball thrown by Williams -- inside a gymnasium of some sort, for whatever reason -- which kind of tells you just how far down Krasinski's about to be dragged by this film; in "The Office" he gets to be funny playing pranks on Dwight Schrute or exhibiting brilliantly subtle, deadpan reactions to the frequent dumbassery of his boss, but in this flick he's just got to sit around and wait for baseballs to get winged at him. In my line of work that's what we call "failing to capitalize on one's talents."

But anyway, Williams's character -- who is I think an Episcopalian minister -- decides his next course of action must be to heal Krasinski, and thus the trailer's money shot begins, with Williams standing over the bloodied Krasinski and calling out thusly:

OK, all right, I get it. You're a white Epsicopalian channeling an African-American preacher. Ah, yes, the irony. That's why you're still the king, Robin.

WILLIAMS: We got to pray just to make it through the DAY-yuh!

Ahh, I see. You weren't sure we would get the black-preacher reference, so you pumped it up by slipping in a line from MC Hammer, who -- get ready -- is also black.

OK. Seriously, Robin, we get it, but here's where the scene really goes off the rails:

KRASINSKI: Was that MC Hammer?

And thus the movie stops beating the reference into our heads with a hammer just long enough to pick up a power drill. Yes, Mr. Krasinski, that was MC Hammer. Most people knew it before you even said it. I knew it; I'd be willing to bet that the group of octogenarians in the back of the theatre, who collectively voted to make this their monthly "movie night" field trip from Golden Acres, fricking knew it. Now, maybe the writers did this because they actually fucked up the line -- MC Hammer said "just to make it today," not "make it through the day" -- but the point still stands that they didn't trust us to get a fucking MC Hammer reference when we heard one. They had to make someone actually utter the words "MC Hammer" just to make sure.

That's the equivalent of the makers of Old Spice ending this ad with a title card reading YES, THAT WAS A DURAN DURAN SONG. Or the famous scene from "Airplane!" being rewritten as follows:

DR. RUMACK: I am serious. And don't call me Shirley.

You see what I mean? I know that dissecting this trailer to within an inch of its life is giving it way more attention than it probably deserves, but I'm sick and fricking tired of going to the movies and having someone throw a trailer at me that basically says, "Here, we bet you'll like this crap, retard." And yes, I do feel sorry for John Krasinski. Here he is, with a bunch of minor TV and film roles under his belt and he finally breaks through with a really popular character on "The Office," which he then parlays into an actual big-screen leading role -- and it's this. Which means he is already dangerously close to following David Schwimmer, Sarah Michelle Gellar, Joshua Jackson, and nearly every "Saturday Night Live" cast member over the last 15 years down the same dreaded career path -- playing extremely popular characters on the small screen, but nuking their nascent film careers by making their leading-man/woman debuts in atrociously bad films.

So yeah, on the one hand, he should've exhibited better judgment -- again, "You'll be appearing opposite Robin Williams" is the pitch-meeting equivalent of "You'll love her, she's got a great personality" or "It's a bit of a fixer-upper" -- but I still feel sorry for the guy. And so should you.

And that's who you should feel sorry for this week.
Posted by Astronaut Mike Dexter at 7:36 AM

Just because I'm a technical bitch with a degree in rocket science...

The video is of "jet-blast" from the 747...not wake turbulence. Wake turbulence is only produced as a result of lift on the wings (e.g., during flight).

Even after hearing Robin Williams was in this, I held out some small hope. Because after all, it didn't just have Krasinski (the next Tom Hanks), but it had a few other "Office" castmembers as well and was directed by one of the "Office" directors.

And then, yes, I saw the trailer.

What's worse is that it will probably be a hit.

It probably will suck, but his adaptation of Brief Interviews With Hideous Men (a freaking David Foster Wallace adaptation) I think will more than make up for it. Or at least he'll suddenly win over some Neil LaBute fans (who natrually ditched LaBute after that ghastly Wicker Man remake).

And I think SMG's career died because she married Freddie Prinze Jr. and his no-talent black hole sucked her in. I told her she'd be better off with me...

"...who natrually ditched LaBute after that ghastly Wicker Man remake" So, so ghastly.

As a loyal fan of "The Office" since its inception, I was mortified to see this trailer before Spiderman 3 a few weeks ago (luckily, the feature film was so bland I actually left the theater rather numb). I agree; Williams's presence is the kiss of death.

In compliance with your advice, I therefore feel bad for John Krasinski this week. Very bad.

Don't cry for John, Argentina. That's Evita. Seriously, though, while appearing in a really horrible film will sink some careers, it won't sink those of folks on really popular T.V. shows. Krasinksi has probably agreed to two or three films already before this one even comes out - he's got job security for at least three more years, which means a lot of chances to make something good. Plus, if he does fail, the fat paycheck in his wallet might help cushion the fall.

Yeah, don't feel bad for Krasinski. He just wrapped up filming on a little movie called "Leatherheads" - directed by and co-starring George Clooney.

I'd have to say the only thing I've seen within... maybe the recent decade... that RW was funny in was Death to Smoochy, and that's because he played an outright asshole. RW's better when he plays an asshole, not an advertised lynchpin for the whole movie.