You know, as much as I've delved into politics on this blog of late, I've actually kind of surprised myself by laying off George W. Bush. I mean, sure, there was this, but other than that, I mean, what's left to do? Guy's at a 26% approval rating, why carry coals to Newcastle?

Why indeed? So this isn't about Dubya; instead, I have a modest proposal regarding his pal Cheney, and here's the short version: 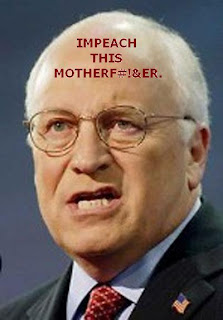 The long(er) version is that Cheney has basically taken it upon himself to write every civics/American history textbook you've ever read in your life. Contrary to what most of you learned during your freshman years in high school, the vice president is in fact not part of the executive branch, and as such all those neato "checks" and "balances" are straight out the window. It was such a bizarre, and radical, alteration of how the federal government is supposed to work that even Deputy White House Press Secretary Dana Perino -- never one to shy away from the task of abject bullshit-slinging -- was at a loss to explain or defend it. (Hat tip: Talking Points Memo.)

So come on, somebody, defend this. Is this OK? Whether you're a naughty big-government liberal or a so-called small-government conservative, is this how you want our government to act?

I remember back in 2001, when we were all huddling around trying to figure out what purpose there could possibly be for crashing 767s into our tall buildings, and what most of us came up with was that they just wanted to sow chaos and bring about a fundamental, and negative, change in the way our very country operates. Well, guess what: Someone has made a fundamental and negative change in the way our country operates, but it wasn't Osama bin Laden. It's our own vice president, who wants to put himself and his actions beyond any kind of oversight and thus, for all intents and purposes, outside the law. I don't care how terrified you are by the prospect of a radical Muslim terrorist attack or how many freedoms you're willing to give up on the chance that that can be kept from ever happening again, that's wrong. Dick Cheney placing himself above the law doesn't put any kind of a dent in al-Qaeda and it doesn't make any of us safer; all it does is create a government position whose occupant is allowed to do whatever the hell he wants.

I don't know, maybe some of you right-wingers out there like that. Well, let me ask you this: How much will you like it when, say, Hillary gets elected and Vice President Ted Kennedy or John Edwards or whoever the fuck gets that same kind of power? Think you'll just be sitting back and taking it then?

Rahm Emanuel, chair of the House Democratic Caucus, has nutted up and informed Cheney that if he doesn't consider himself part of the executive branch, then Congress may not feel obligated to finance his executive expenses. That's a start, and quite frankly it's more balls than I would've given Congressional Democrats credit for in a long time. But it's not enough. Someone needs to take this guy down, because if we don't, there's no telling who's going to claim this kind of privilege again and what they're going to do with it. I'm sick and tired of waking up every morning to face a country that's a little less recognizable every single day. Are we so cowed by the allegedly looming threat of creeping "Islamo-fascism" that we don't even recognize or care when one of our own leaders slouches toward actual fascism in our own capitol?

My modest proposal: Impeach this motherfucker, Congress. If attempting to unilaterally rewrite the Constitution and removing oneself from a fricking branch of government doesn't qualify as a "high crime," then pray tell, what does? And really, we're not talking about someone that masses of American citizens are going to rise up and defend; the risks are not as great as some would have you believe. Impeach this motherfucker, take him down, make an example out of him. It's not about revenge, or just looking for something to do, it's about trying to maintain some semblance of sanity in a country where everyone's supposed to be equal in the eyes of the law.

Either impeach this motherfucker or tell me what possible purpose there is in keeping him around, 'cause frankly, I just don't see it.
Posted by Astronaut Mike Dexter at 11:10 PM

Email ThisBlogThis!Share to TwitterShare to FacebookShare to Pinterest
Labels: politics, you know what I blame this on the breakdown of? society

I gotta tell you...for sometime I have been wondering why people are not rioting in the streets over what this bunch of criminals have done to our country.

Unlikely that Congress will do anything, and they've wrecked the Supreme Court, so we're not likely to get any help there.

I think it will take a generation to undo the damage they have done to the constitution.

"i remember back in 2001, when we were all huddling around trying to figure out what purpose there could possibly be for crashing 767s into our tall buildings, and what most of us came up with was that they just wanted to sow chaos and bring about a fundamental, and negative, change in the way our very country operates. Well, guess what: Someone has made a fundamental and negative change in the way our country operates, but it wasn't Osama bin Laden. It's our own vice president, who wants to put himself and his actions beyond any kind of oversight and thus, for all intents and purposes, outside the law."
Doug, I couldn't agree more so you must be right. In trying so hard to win the war on terror we are losing it. Changing our ideals and chucking the rule of law this country has thrived under for over 200 years had done more for terrorist causes than Osma.

An interesting side note: It appears that if Congress does impeach Cheney, he would preside over his own impeachment.

You know, this happened to the English at one point in time...the king stopped respecting tradition and tried to circumvent Parliament. They forcibly removed that fucker's head. We need to impeach our fucker.

Utterly classic - and yes, the only reason Republicans might get upset about this is if they can admit they might not win in 2008 and (shudder) Democrats might enjoy this same abuse of power.

Otherwise, they'll continue to do anything possible to let Bush and Cheney do whatever they want, without any repercussions.

Put it down in your calendar that sometime in January 2009, Republicans everywhere will begin bitching about Democrats doing 1/100th of what this pathetic current administration has been doing for the last seven years or so.

You don't need to impeach him at all. All you have to do is recognize that his statement that he was not a part of the Executive Branch of government was, in fact, a resolute and binding resignation.

All you have to do is accept it, and then keep him out of the Senate chamber in favor of the President Pro-Tempore of the Senate.

A nicely worded letter to the President would be acceptable as well, suggesting which candidates would be the most likely to sail through the confirmation process as the new member of the Executive Branch, the new Vice President of the United States of America.

Not bad Pat, but I do so much like the idea of saying "Ok, so you aren't part of the executive branch any more? Good, no executive privilege for you. Here, have a subpoena."

Amen!!! Great post. He got a subpoena today. I am doing the happy dance =)