I'm headed down to Baton Rouge this weekend for a wedding, so you won't hear much from me over the next couple days, but I still wanted to leave you with what the French call "a little sum'n sum'n."

Over time it became abundantly clear that pretty much everybody hated the picture I had on my Blogger profile, the one with me sneering and sticking my tongue out. Honestly I was kind of shocked by that, because I love that picture. Really, it sums up my personality about as well as any picture of me that anyone's ever taken.

But everything gets stale after a while, so like Aunt Jemima and the guy on the New England Patriots' helmet, the official Face of Hey Jenny Slater has been freshened up a little.

Sneering Doug is out. Pimp Daddy Doug is in -- very, very in. 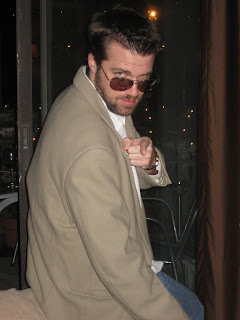 Incidentally, this is the picture Paris Hilton has taped up on the wall of her jail cell.

I must warn you, don't look at that picture too long, because its sheer sexual magnetism may prove too much for you to handle. If you must look at it for an extended period of time, use a box with a little hole punched in it or something, and make sure you have a cold shower at the ready.

Have a great weekend, dorks! See you in a few days.
Posted by Astronaut Mike Dexter at 7:54 AM

One of my colleagues came by my cubicle as I was opening the site, and she had to be peeled off my computer because she could not resist teh sexxy. I implore you, think of the consequences of using this picture!

For the record, I always thought that the O.G. picture fucking ruled.

Shit, dude, you may well have won the hott blogger bracket with that shit...

Y'all have a great weekend- DOug, have fun in Red Stick.

This picture kind of makes me want to marry you.

I thought the sneering picture was kinda cool, actually. But I like the Pimp Daddy Doug picture, too. *nods*

I like the old one better. The new one is too sexy, it's turning me gay.

It's good to repackage your image from time to time. Just ask Britney or Lindsey.

I don't know. I liked sneering Doug. You had a nice "fuck you" in your eyes. This picture says "fuck me."

Quite possibly the greatest shirt ever known to man. I present you the "Viva La Matthew" shirt, you can thank me later.