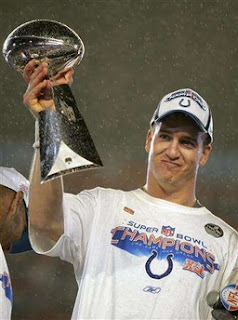 · Congratulations, Peyton Manning. I like you a lot more now that you're not making my Bulldogs' life a living hell every year.

· On a related note, if a Florida QB had won the Super Bowl the same year that the Gators are holding the national titles in football and basketball, I think I'd be up in a clock tower right now.

· Let the record show that my final score prediction was within two points of each team's eventual totals, and within one point of the total aggregate score. But then I am well established at being awesome at predicting stuff like this.

· How weird is it that both the college national-championship game and the NFL championship game both began with the opening kickoffs being run back for TDs -- and yet both teams that did that ended up losing anyway?

· Lord knows I hate to make rash overgeneralizations, but this year's crop of Super Bowl TV ads sucked. Suh-huh-hucked. Suckity-sucked-sucked. The David Letterman/Oprah Winfrey ad (above) was far and away the best ad of the night; I also thought the Kevin Federline ad for Nationwide Insurance was funny. And some of the Budweiser ads were cute (as opposed to hilarious, which is what you kind of expect of an ad that somebody spent $2 million to place). But everything else was incredibly lame.

I'm interested in hearing your thoughts on the ads, though -- is it just me? Or did they really blow this year?
Posted by Astronaut Mike Dexter at 8:05 AM

I agree. As a whole, the ads sucked, with very few standouts. Here's what I posted over on my blog:

And though it wasn't a true commercial for a product, special kudos to David Letterman and Oprah watching the game.

The dalmatian and robot were cute and bit heartwarming. The Ultra Man and Robert Goulet ads get major points for being just so bizarre that they really stood out. And the two Bud Light ads I referenced were the best "chuckles" in an otherwise lame crop.

I thought that the best ads of the evening were the amateur ones that won contests. The Doritos ad, particularly, was hilarious. I loved the David Letterman/Oprah spot, loved Robert Goulet, loved the scary hitchhiker, thought Career Builder should have stuck with the monkeys if they had nothing better to offer.

I thought the one image of the Career Builders add with the man covered with binder clips was great - LOL literally!

The Career Builders ones were pretty good. I laughed out loud at the one with the karate-knowing delivery guy. And Robert Goulet scaling the wall was pretty cool too.

While I generally agree that the ads did suck, none of you have mentioned my favorite. The Garmin commercial (for the car GPS system) that riffed off of Godzilla and the Power Rangers was freakin hysterical. "Evil Maposaurus gonna fight to the death!" Man, I lost it during that. Other than that the paper/rock/scissors ad seemed the funniest.

I loved the Power Rangers spoof! The sad robot one was probably my second favorite.

The return for a touchdown on the first play of the game did have a number of us fearing "deja vu" all over again! Thank goodness I did not have any bets riding on this game this time - once bit, twice shy...

I thought the Goulet ad was clever, but I suspect for most viewers he was some unknown entity and thus not funny, despite his crawling on the ceiling...

I loved the Snickers commercial and the Oprah/Dave blip. The rest pretty much sucked.

The Oprah/Dave ad was one of the few that didn't suck. The worst had to be that one with the guy that used the online sales leads generator was the worst. Overall the worst year for commercials that I can recall.

A mostly forgettable collection of mediocre commercials. All the thunder had been stolen out of the "better" ones already from the mainstream media, i.e. Federline's spot.

I only laughed at Goulet because all I oould think about was "Yes, it's Red Ships of Spain."