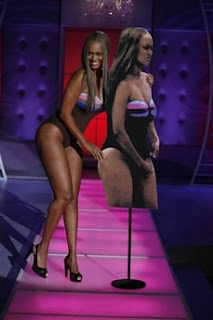 With an indeterminate number of precincts reporting, Hey Jenny Slater is calling the Great Tyra Banks Fat/Non-Fat Debate of 2007 for "Not Fat" -- actually, "Hott with Two Ts," which as of now has taken just under 80 percent of the vote. So I guess we can officially dismiss Tyra's alleged fatness as a more or less purely tabloid-constructed phenomenon. I believe all the more salient points have already been made, so I'll simply say this: I wasn't one of those people who vowed to leave the United States if George Bush got elected in 2004, or if we invaded Iraq, or whatever, but if we ever get to the point in this country where a 5'10", 161-pound, 34DD-packing woman is considered gross, I am getting the hell out of here.

and a bonus 11th -- no, I'm not even going to name it on here. I'm too embarrassed. I'm simply going to put the video up here and see how many people remember how f'ing huge this was on MTV back in, like, 1985.

Toss your own Random Tens, embarrassing '80s music memories, Super Bowl XLI predictions, whatever in the comments.
Posted by Astronaut Mike Dexter at 8:26 AM

I like the prediction, but at least seven of those Bears points will be scored by the defense. Actually, I mean "at least 16."

And I f'in love "The Wanderer."

Now that I've wiped away the tears of blood caused by that song, the best efforts of my iPod:

1. Where's your head at, Basement Jaxx
2. Downtempo Manifesto, DJ Spooky vs The Freight Elevator Quartet
3. Holiday in Cambodia, Dead Kennedys
4. Out of Step, Minor Threat
5. I want you, The Beatles
6. Janes Says, Jane's Addiction
7. In The Rain, Madness
8. It's up to you (live), the Specials
9. C'mon 'n' Ride It (The Train), Quad City DJs
10. I fought the law, The Clash

I can unequivocally say that Josh loves this song, has it on iTunes, and probably has it backed up on a two different thumb drives, just in case.

Damn - don't know what's worse - that video, or the fact that I saw them perform it in concert last summer

Anyhow, my co-worker and I curse you both because it is stuck in both our heads now and surely will be all fucking day.

Happy Weekend to all. Now then:

Aaah, Rebecca DeMornay as Sara. This song was HUGE when I was in 10th or 11th grade. But dammit, it's not going to leave my head for the rest of the day.

Ok, I'm home and Youtubes accessible. Are you kidding? Jefferson Starship fuckin' rules. The only thing embarrassing about that was that it wasn't "We Built This City."

That is exhibit 1a regarding why it isn't necessarily cool when someone writes a song about you. "Sara Smile" being 1b, naturally.

I always feel bad when you see a name actor in a music video. You almost want them to hold up a sign that show how much there car and house payments are.
Krokus "Screaming in the Night" You spend the whole video wondering how much money they over spent on a video for a band that had yet to make it. Not that they ever did.

Why do so many people keep forgetting the ol NFL cliché that's hardly ever wrong:

Although surely whoever from the Gayturd nation that sold their f-ing soul to Satan for this last year in the college athletics landscape forgot bout inT-Rex. So maybe the Manning Family can finally claim a big game victory after all...