So I fell asleep last night whilst catching the late NFL games, and I wake up and it's Denver-New England on NBC and there are all these "China Bowl" banners around the field, and in my addled, not-quite-awake-yet state I'm thinking, "What the crap, are they playing this game in frickin' China and I didn't know about this?"

Nope, as it turns out -- the China Bowl will be a Patriots-Seahawks matchup in Beijing to kick off next year's preseason, and apparently it will also "begin the countdown to the 2008 Olympic Games." Interesting that they'd begin the countdown to the world's biggest international sporting event with a game that hardly anybody outside the U.S. plays, but still, whatever brings the wonderfulness of the pigskin to people in other parts of the world can only be a good thing.

For halftime of the Pats-Broncos game, they introduced the "Friendlies," the Pokemon-looking mascots for the Beijing games. They're a little gay, but the same could be said for pretty much every Olympic mascot in history (with the exception of Sam the Eagle, of course), and they'll probably be a cinch to market to little kids here in the United States. The Olympic organizers might've made a bit of a faux pas, however, in turning the entire halftime show into something akin to one of those wack-assedly surreal Olympic opening ceremonies we get every four years: 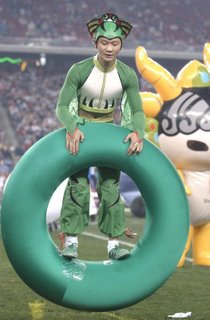 I've been to Boston, I've known plenty of people from Massachusetts, and I can only imagine how a stadium filled with Bostonians and Mass boys (who were already surly at seeing their home team down 10-0 at the break) responded to these candy-colored knob jobs hopping around the field on what appear to be giant inner tubes.

I'd love to have a YouTube depiction, or even some random eyewitness's written account, of what the fans' reaction was.
Posted by Astronaut Mike Dexter at 9:33 PM

Email ThisBlogThis!Share to TwitterShare to FacebookShare to Pinterest
Labels: football, you know what I blame this on the breakdown of? society

I actually think that the Friendlies are kind of cute (and definitely, as you mentioned, marketable). And it's obvious that a lot of consideration and cultural subtext went into the design process, when the Atlanta planning committee just handed us this mofo when even they didn't know what the hell it was.

Middle of the night game to start the year. Can't wait to see the ratings post game.

FYI for future reference, DG, the correct term is MASSHOLES.

I really need to develop an acid habit for that 2008 opening ceremony - those things are not made with the clean and sober in mind. Probably some flower child illuminati putting those out.