Roundtable No. 2: Live from Bizarro World.

This week's blogger roundtable questions arrive courtesy of Bruce Ciskie, who has earned a spot on my "On Notice!" board for this week. Thanks to his questions, I have been forced to publicly respect the Pac-10 (besides USC, even!) and praise Tennessee and Georgia Tech, resulting in an upside-down Bizarro World of a post where I have to talk nicey-nice about teams I cannot, in actuality, stand. On notice, pal. Well, let's get this over with. 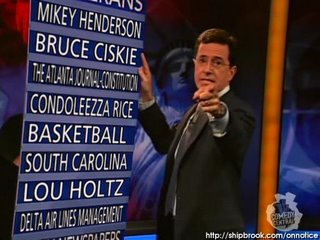 Take a good long look, Ciskie. Ain't no gettin' off this train.

1. What team best met your overall expectations of them in their opener?

Well, the obvious answer is Tennessee, but I wouldn't describe what they did Saturday as "meeting my expectations" so much as "taking my expectations out back and breaking their kneecaps with a sledgehammer," and I'll be talking about them plenty later on anyway. So I'll say that Southern Cal probably did the best job of meeting expectations. Arkansas clearly fooled some people into thinking that they might actually stand a chance against the Trojans this season -- first and foremost being the oddsmakers, whose Arkansas +8 line was the next best thing to Wachovia hanging banners reading "Free Money All Week, Everything Must Go" at every branch in the country. Yet despite needing to replace not one but two Heisman winners, USC executed another shockingly accurate reenactment of the "Stuck in the Middle With You" scene from "Reservoir Dogs," with Arkansas once again playing the part of the hapless kidnapped cop in Michael Madsen's trunk. 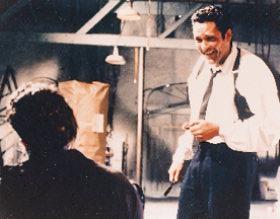 Listen, Coach Nutt, I'm not gonna bullshit you, all right? I don't give a good fuck what you know, or don't know, but I'm gonna torture you anyway, regardless.

Also, Oregon, who got a huge leap in my Blogpoll rankings, acquitted themselves very well in laying waste to Stanford. Before this turns into an all-Pac-10-all-the-time party, though, I'll also give credit to Texas and new QB Colt McCoy (damn, that's an awesome name -- don't you wish your quarterback was named that?) for eviscerating North Texas every bit as severely as they should have. And little ol' Rutgers looks like they might be headed to back-to-back bowl games for the first time in school history after running all over UNC.

2. What team jumped off the map and surprised you the most? (Bonus points to anyone who can make an argument for someone besides Tennessee.)

Several teams surprised me, but Tennessee was by far the biggest -- even more than the fact they won, they surprised me with how they won. I guess I wasn't surprised to see a Pac-10 pass defense get shredded, but I was stunned at how Cal couldn't get any kind of offense going until it was much too late, particularly with Tennessee's front seven supposedly being so wet behind the ears. Runner-up would probably be Georgia Tech's secondary -- another allegedly inexperienced unit -- holding Brady Quinn in check for a good portion of the GT-ND game. Naturally, Chan Gailey's lobotomized play-calling hobbled the Jackets once again, but their defense is going to cause people even more problems than I thought.

OK, jeez, enough Tennessee and Georgia Tech. Bleh. I was also surprised by UCLA, who was facing a very threatening non-BCS opponent in Utah. Given the way UCLA's defense and Utah's offense finished the '05 season, I figured the Bruins were in big trouble, but Karl Dorrell had his guys ready to play, and they pretty much shut down Utah in the second half. Also have to give some props to my homeboys from UAB -- I've already patted them on the back for standing tall against Oklahoma, but what was particularly surprising to me was that we appear to have already found a capable replacement for Darrell Hackney. Sam Hunt looked like a seasoned veteran against the Sooners, and given that he seems to be recovering quickly from the minor injury he sustained Saturday, he could put the Blazers in position to turn a major rebuilding year into a bowl season. 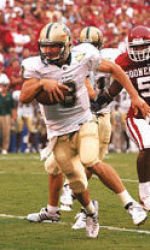 Sam Hunt, please continue to play like a champ for the rest of the season so I don't look stupid for hyping you like this, k thx.

3. What team best moved themselves into a position to surprisingly contend for a national title?

Honestly I don't think anyone played themselves into title contention last week who wasn't there already. Realist thinks that Florida State positioned themselves well, but after that drag-ass Monday night game, when I look at the Seminoles I see the same offensively inconsistent team that finished the '05 season on a 1-4 skid. Oregon and Tennessee looked great, but Oregon still has USC to contend with, while Tennessee faces a tough conference schedule chock full of teams who will almost certainly tackle better than California did.

However, with this season more than any in recent memory, it seemed like every presumptive title contender came into the season with some kind of major weakness that could potentially sink their chances, and last weekend we saw nearly every one of them answer those questions fairly emphatically. Despite losing nine starters on defense, Ohio State looks like they'll be fine as long as they don't have to face more than one Garrett Wolfe per week. Texas seems to have found a capable QB to fill Vince Young's shoes. Auburn avoided their usual early-season hiccup and put away Wazzou with little trouble. USC, as I said, doesn't seem to have missed a beat despite replacing their entire Heisman-laden backfield. New contenders didn't necessarily leap into the fray, but we did see a lot of dominance from the top teams that we weren't quite sure about when we were hashing out our preseason top-25 ballots.
Posted by Astronaut Mike Dexter at 7:09 PM

You are my hero for putting Ciskie on notice.

Loved that USC-Arky line. I got it at 7 points, took USC, and combined that pick with Nebraska and West VA to cover. Played that 3-team parlay in two different situations and won some spending cash.