The precise moment at which I lost hope. 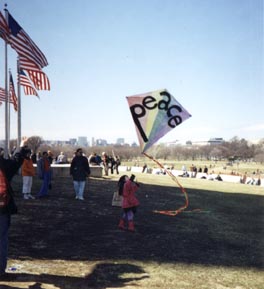 A picture I took at the last big anti-war protest in Washington before the war started.

Those who know me well know that my train of thought on the Iraq War has taken some detours and passed through a few unexpected stations over the past three and a half years. Before the war started, I was adamantly against it, and even went so far as to wake up at midnight on March 15, 2003, so that I could drive 11 hours up to Washington, D.C., and participate in one of the biggest anti-war protests in the country. Once the war did start, as upset as I was over the whole thing, I did my level best to shut up about the issue of whether we should've gone to war or not -- which was by then moot -- and supported the troops as best I could. You will note, of course, that this didn't mean I shut up about the shocking incompetence with which the Bush administration planned and directed said war, but you'll also note I was never one of those people who campaigned to immediately yank the troops out of Iraq and bring them back home. I felt that, however misguided the decision had been to send them to Iraq in the first place, they now had a job to do, and it would be unfair to the Iraqis to pull them out before that job was done. On one occasion I actually turned down an invitation by a local progressive organizer to speak at an anti-war rally, because I didn't feel that I agreed completely with their bring-the-troops-home-now message.

As bad as things continued to get in Iraq, I stuck to that belief that things could get better and that we needed to keep our troops there to finish the job, but over the last few weeks that belief was progressively weakened by both the dramatically bad turn of events in Iraq and the destabilization in Lebanon. And then, on Monday, August 7, 2006, at 11:48:51 a.m. Central Daylight Time, I read this . . .

My attitude is that a young democracy has been born quite quickly. And I think the Iraqi government has shown remarkable progress on the political front. And that is is that they developed a modern constitution that was ratified by the people and then 12 million people voted for a government.

Which gives me confidence about the future in Iraq, by the way. You know, I hear people say, Well, civil war this, civil war that. The Iraqi people decided against civil war when they went to the ballot box.

. . . and I officially lost all remaining hope.

Gather up the troops, bring them home this very second, don't make them spend another day in Iraq, because we. Are. Fucked. 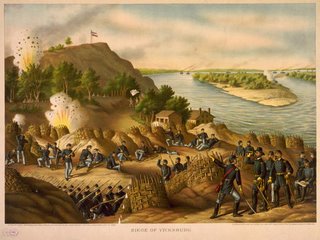 I really don't have anything I can add to Attaturk's very perceptive assessment that America's own history disproves the notion that elections alone are an ironclad defense against civil war. If you've ever taken an American history class at any point in your life, you already knew that. I won't even ask how stupid someone would have to be to utter Bush's statement in public, since I know that even most Republicans, all but the most delusional, Kool-Aid-soaked among them, would have to answer "pretty stupid, actually." Instead, I merely want to ask:

If the current Commander-in-Chief of our armed forces is this disconnected with reality -- not just reality as it pertains to the situation on the ground in Iraq, but reality as it pertains to the whole of human history -- then what purpose can possibly be served by forcing our soldiers to carry out this mission for one more day under the crushing burden of this administration's incompetence?

As long as Bush is in office, things are not going to get any better in Iraq. Things are not going to get any better in Iraq because to commit to making things better, you first must at least tacitly admit things are bad, and that is something this president just isn't capable of doing. He knows his legacy is predicated upon things turning out great in Iraq, and since what he's doing now is not appreciably different from anything he's been doing the last three and a half years, to admit "Yeah, things are kind of screwed up right now" would be to concede that they've been screwing this particular pooch from the get-go. Bush is going to keep doing what he's always been doing and is going to get, as the saying goes, what he's always got; this is something to which I am not prepared to subject our troops for another two years (or longer).

The obvious rejoinder to this is, "But you said if we pulled out the troops too soon, it would allow the country to devolve into a lawless, terrorist-infested shithole." Wake up -- Iraq is a lawless, terrorist-infested shithole. And if it's going to be a lawless, terrorist-infested shithole whether our troops are there or not, and the few Iraqis who still care whether our troops are there don't seem to want them there at all, why continue leaving them in harm's way? With each soldier who dies, conditions will be almost exactly the same after that soldier's death as they were before -- which is to say, terrible -- so what right have we to keep them there? Who volunteers to be the person who goes to all these dead soldiers' families and tells them, "We regret to inform you your son/daughter/husband/wife/fiancee is dead, but look on the bright side, at least their death didn't change anything"?

Before, I thought there were three choices: a) Keep the troops in and somehow turn Iraq into a stable, America-friendly democracy; b) Keep the troops in and allow them to continue to get screwed over by the Bush administration's bungling; c) Yank 'em right out, and I chose a). Well, I'm sorry to say that it looks like a) has been taken off the table, and it's lesser-of-two-evils time. Well, I choose c). Think I'm "cutting and running"? Offer me a better choice then. 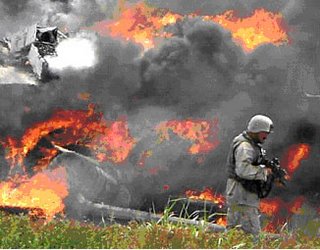 How much more of this?

Pull the troops out. Pull them back to Kurdistan if you want, where conditions are such that they might actually be able to accomplish something. Put some in Kurdistan and send the rest to Afghanistan, which by all accounts is still salvageable. Send some of 'em to rebuild stuff in New Orleans. But they don't need to spend another day in Iraq. Every day they don't come home just increases the chance that this arrogant, witless bunch in Washington is going to succeed in passing the tough decisions on to the next administration, be it Wes Clark's, Al Gore's, John McCain's, or, so help me, Bill f'ing Frist's.

We've already seen 2,591 soldiers die in this war. At that rate, by the time Bush's presidency ends, 1,976 more will have gone off to their eternal reward. Are you prepared to sacrifice nearly 2,000 more lives just so that Bush can tell himself, when he finally leaves the White House for good, "Least I didn't cut and run"?

I'm not. It's time to bring the troops home.
Posted by Astronaut Mike Dexter at 8:04 AM

Doug,
I find myself in a similar position as you, trying to figure out from the beginning why we were going over there, and actually slipping from being a slight Republican to a near yellow-dog democrat as this progressed. The level of incompetency and pathological committment to ideology over a committment to winning was absolutely absurd, and doomed this war from the beginning. I recommned you check out Peter Galbrath's (sp?) new book, The End of Iraq. Very good read.

Also, it's nice to be able to read about politics and then click down and read an SEC preview. I am a little more worried about world affairs than the Dawgs, but that doesn't mean I'm not concerned about the O-line this year after they moved Dixson to OG.

Welcome to the land of the right thinking on Iraq. I only wished you would have joined us here months ago.

If only the Democratic Senators had been there in the first place (Feingold excepted)- they could have filibustered the whole thing, instead of acting like it's all the Republican Party's fault.

My worry is that Bush and the neocons will pull the troops out, just to send them into Iran.

The definition of out of the frying pan...

I am a little more worried about world affairs than the Dawgs...

Anonymous(1) needs to get his/her freakin' priorities in order.

Dave,
When I said I was a little more worried about world affairs, that just meant I'm not too worried about the Dawgs overall this year. George Bush's version of America worries me a lot more than whether Stafford is starting by the 3rd game. I have a lot of confidence in MR when it comes to the QB.