The laundry list of head-scratching upsets and near-upsets makes poll voting as random an exercise as it's been all season; each of these ballots has already gone through a number of iterations, none of them especially satisfying, and you're more than welcome to suggest a few more before tomorrow's deadline. We're all just marking time until SECmageddon in the Georgia Dome this weekend, anyway.

· The top three get shuffled again, and Florida goes back to the top because in spite of their laundry list of mediocre-looking final scores over the course of the '09 season, I fully expect them to beat Alabama in the SEC title game this weekend (though I think it'll be a close, hard-fought game regardless). Texas and Alabama both put up sketchy performances in their big rivalry games, but Texas's total defensive collapse looked to me like the bigger and more glaring weakness, so they get bumped down to third. 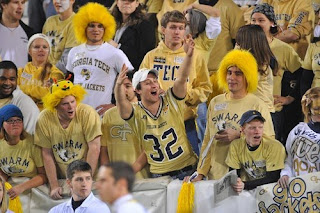 · Everyone from seventh through 14th gets bumped up a spot thanks to Georgia Tech getting clocked by Georgia on Saturday night. You're welcome, everybody. No, no, you don't have to thank us; bitchmaking the nerds is its own reward.

· It starts getting dicey down toward the bottom, thanks in part to the raft of Rivalry Week upsets and near-upsets (which also wreaks havoc with the Power Poll ballot, as you'll see below). Does LSU really deserve to jump up to 20 after getting taken to OT? Does Ole Miss deserve to stay in the top 25 at all? Are West Virginia and Nebraska really any good? Maybe, maybe not, but I can't figure out whom to put above them.

· UNC, Clemson, and Oklahoma State all take a hike thanks to embarrassing upset losses. The Tarheels lost to in-state rivals that had already been eliminiated from bowl contention; Clemson got rolled by a Gamecock team that should've been finishing up their usual late-season faceplant; and the Cowboys went from "potential at-large BCS contender" to "maybe they make the Holiday Bowl" in the span of four shutout quarters from Oklahoma. 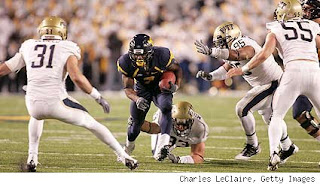 And here's the SEC Power Poll ballot, which is probably even worse:

1. Florida -- I think Alabama's body of work this season, overall, is stronger than Florida's, and yet I just can't pick against Urban Meyer's Gators in a big game. Well, I mean, I can, I just don't think I'm gonna.

2. Alabama -- This year's Iron Bowl was a chance for the Tide to pile-drive Auburn and make an emphatic statement that Chizik's Tigers were going to be their bitches for the foreseeable future. Instead, they screwed around and didn't seize the win until the very final minutes of the game. I don't know what that says about Bama or their level of focus heading into the SECCG, but it probably isn't anything good.

3. LSU -- Epic brain-fart in the final seconds against Ole Miss, taken to OT by Arkansas -- but whom do I put above them? The fact that the Tigers still rank as the third-best team in the conference tells you what a down year this was for the SEC.

4. Ole Miss -- Kind of a similar situation to LSU: Don't know whom I'm supposed to put above them, though I really feel like I want to put somebody up there, as the Rebels turned in what was easily the worst performance by any SEC team on the final weekend of the regular season. I like Houston Nutt more than a lot of people seem to, but he certainly did nothing to disprove any of the clichés about him this year. 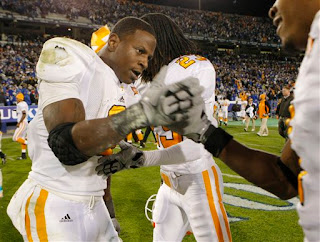 5. Tennessee -- Went up against a hot Kentucky team and made the big stops when they needed them despite being one or two sprained ankles away from grabbing random fans out of the stands to play defense.

6. Georgia -- I don't know whether to be jubilant that we finally put that kind of complete effort together or tear my hair out wondering why we didn't see it until the final game of the season. But I'll revel in the rich schadenfreude of a win over Tech regardless.

7. Arkansas -- Weren't even a lock to make bowl eligibility against the schedule they were facing in '09, but made important progress over the course of the season. Still need to toughen up on defense, though, if they want to see that progress continue in 2010.

8. South Carolina -- Similar situation to the Dawgs: Just when it looked like they were reaching terminal velocity in yet another November nosedive, they busted out the whuppin' stick on their most hated rival. I hereby demand that the ACC cancel this week's title game in Tampa and declare USC and UGA conference co-champions.

9. Kentucky -- Had an opportunity to break the nation's longest active losing streak to a single rival right in front of them, but Lucy yanked the football away once again. And the way Lane Kiffin appears to have jump-started things in Knoxville, the Wildcats may not have another chance that good for a long, long time.

10. Auburn -- I hate dropping them this low after such a strong performance in the Iron Bowl, but two wins in their last seven games was a less-than-inspiring way to close out the season, particularly when the last two losses involved pissing away 14-0 first-quarter leads. The overall product in '09, though, has been a lot better than I gave Chizik credit for being able to put together. 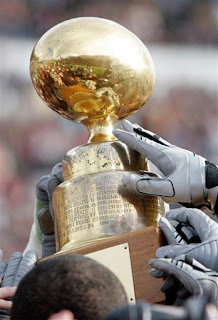 11. Mississippi State -- If Dan Mullen doesn't win SEC Coach of the Year, the award committee got paid off by the same people who were funneling money to Mark Curles's officiating crew.

12. Vanderbilt -- Had their best performance of the season this past weekend.
Posted by Astronaut Mike Dexter at 12:00 PM

No Oregon State in your poll? Must be an oversight.

You forgot Georgia Tech in the SEC Power Poll. I think they slot in at #9.