A memo from the desk of Arnold T. Pants, Esq.:Admonishing Tiger, demolishing "Twilight," and wrapping up the week in hotness. 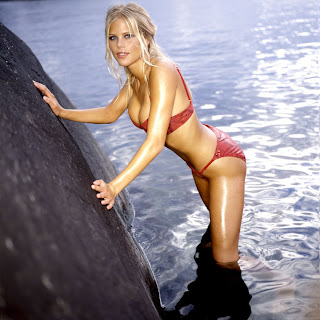 · I know it's been talked about endlessly over the past week, but I think it bears repeating: The above individual is what Tiger Woods cheated on. Tiger Woods looked at her, thought to himself, "You know, I'm Tiger Woods and that's not good enough for me, I should get to bang other ridiculously hot women besides her." So what I'm saying is that after Elin finishes working her dear hubby over with a nine-iron, every guy in America who's ever had to beg for nookie from even an average-looking chick should get in line behind her to give Tiger a boot to the nuts themselves, because . . . well, that's just being greedy in addition to being adulterous. To say nothing of stupid. Tiger, here's hoping she rips you for every last Escalade-crashin' dollar you have.

Maybe next time he should consult this.

· Apparently the Twilight book series goes off in directions even more fakakta than I could've ever imagined. A Twilight book so godawful that they don't even think they can film it? God deliver us. Seriously, if you're a woman under the age of 30 who's read any of those books as anything other than a goof or a dare from one of your friends, please e-mail me so that I can give you some suggestions as to actual works of literature you might un-rot your brain with. And if you're a human being over the age of 30 who's gone to see any of the movies in an un-ironic context, please kill yourself now. You're only going to mess up humanity's chances for survival when the "2012" apocalypse comes.

· All right, it was bad enough when the asinine Salahi couple attention-whored their way into a White House dinner to which they weren't actually invited. But lying about being a Washington Redskins cheerleader? Now you're messing with the integrity of one of the greatest cheerleading squads in the history of professional sport, ma'am, and that just isn't gonna sit with me. (Seriously, if you want to be an NFL cheerleader that bad, go be one of the Dallas Cowboys cage dancers.) 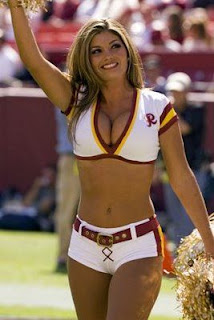 White House Party Crasher Lady, whatever the hell your name is, trust me, you can't roll with this.

· A season of unrelentingly awful handicapping at EDSBS comes to a merciful end with my final picks column of the regular season, which involved me bending the laws of time and space just so that I could punt the responsibility of picking games onto someone else -- in this case, my 2002 self, fresh-faced and (hopefully) clear-headed enough to not make any worse a hash of the job than I already have.

· You may be surprised to know that I didn't actually watch any of the Victoria's Secret fashion show on CBS the other night. Seriously, if I want to see scantily clad women, why would I settle for viewing them through the PG-rated filter of a major TV network's censorbots? I did come across this, though:

I'm as outraged by that clip as anything I've seen on the Internet. Listen, I'm all for free speech and everything, but there is no reason that the words "too tall" or "boobs too big" should ever be uttered, either to this poor girl or anyone else. Shame on you, People In Charge Of Model Selection. This will not stand!

· One last video, also from Warming Glow, concerning a TV show that looks way too awesome to ever see the light of day in the U.S. -- and indeed, it's actually being produced for BBC4. Herewith, "The Increasingly Poor Decisions of Todd Margaret" (put those headphones on, especially if you're at work, because the audio is highly NSFW):

Let me get this straight: I and millions of other people have been clamoring for the return of "Arrested Development" in some kind of form -- revival of the series, feature film, Internet shorts, anything -- ever since that show was cruelly killed off before its time a few years ago. So now they put Will Arnett and David Cross in a show together -- woohoo! -- and I can only watch it if I'm in Great Britain?

Not cool, TV gods. Y'all still owe me for the series finale of "Seinfeld" and the mere existence of "The Hills," and you're gonna pull this crap? I'm calling shenanigans. Shenanigans!
Posted by Astronaut Mike Dexter at 1:05 PM

Email ThisBlogThis!Share to TwitterShare to FacebookShare to Pinterest
Labels: blogs that are better than mine, embedded video, hot chicks, stupidity, teh suxxorz, TV, you know what I blame this on the breakdown of? society

holy shit. can i stream this show on the webs somehow?

Just for the record, it doesn't what the woman Tiger cheated on looks like. Strange is what he was after, not necessarily good looks. Monogamy is fine, but it is also contrary to genetic urges and dispositions.

Now, when you get to be - ahem - of a certain age, it's all strange so there's no need to stray, but Tiger is young, healthy and struggling between the desire to retain corporate endorsements, and the equally strong desire to share genetic material.

I seem to remember an old photo posted on the Interwebs of an exceptionally hot chick with the caption, "Not matter how hot she is, somewhere there's a man who's sick of her shit" or some such. At any rate, it applies here too.