One of the nice things about getting plugged into the wider community of sports bloggers is you make some pretty knowledgeable friends and acquaintances. This past summer, I consulted with Coach Beergut of Texas A&M blog I Am the 12th Man on coach Mike Sherman's employment status heading into 2009; five months or so later, guess who Georgia gets matched up with in a bowl game. Given the mutual curiosities between our two fanbases -- we haven't played the Aggies since the national-championship season of 1980, and have played them like all of four times throughout history -- he was more than happy to participate in a little Q&A exchange leading up to the Independence Bowl. My answers to his questions are up on his blog now, and his answers to my questions follow.

1. A&M is a program with a lot of heritage and a lot of proud traditions, but this decade hasn't been especially kind to the Aggies. Where does A&M see itself in the college-football firmament, and does a bid to this year's Independence Bowl qualify as a disappointment (as a lot of Georgia fans see it), or as a sign that things are looking up?

The bid to the Independence Bowl is not a disappointment in that I believe going to a bowl game and making the postseason was one of our preseason goals after the losing season we had in 2008. We made a poor hire in bringing Dennis Franchione to our program in 2002, and we are still recovering from that five-year mistake. When you spend half a decade standing still or moving backwards, you have a lot of catching up to do, and we are still trying to do that on the field. Making the postseason this year is a sign of progress, but only a small one in that we have merely accomplished a goal, not surpassed one. 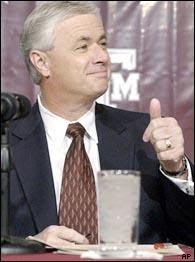 Yeah, the rest of the country joins you in wondering what the hell happened with that one.

2. The Aggies have fielded an impressively balanced offense this year, which a lot of Georgia fans no doubt watched hitting on all cylinders against Texas on Thanksgiving. Of the many talented skill-position players in your arsenal, which one is the one you would recommend Georgia spend the most time watching out for?

Quarterback Jerrod Johnson is probably our most dangerous player, simply because the ball is in his hands on every single play, and he is the triggerman for our offense. If you slow down Jerrod, you slow down our offense, period. Moving away fromt he quarterback position, WR Uzoma Nwachukwu (coaches and teammates call him "EZ") is one of our most explosive players, scoring TDs through the air and on the ground. EZ averages 18 yards per catch, has 6 TD receptions this season, and 1 rushing TD. 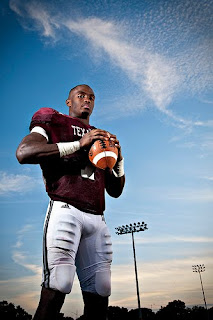 3. At the same time, there have been games in which the Aggie offense has exploded (Texas, TTU) and times when the explosion was more like a backfire (Arkansas, Kansas State). Do you have any idea where the source of that inconsistency lies?

During the Arkansas and Kansas State games, we were still shuffling our offensive line around, and were trying to find the perfect lineup to throw out there. The result was poor pass protection for Jerrod, which helped those teams shut down our offense. The Kansas State game was the first true road game for a young team where everything that could go wrong did, and the result just snowballed. The Arkansas game was a game where we went up early, they made some adjustments, and once they got their pass rush going, we weren't able to protect Johnson.

4. On the flip side, which of Georgia's offensive players scares you the most in terms of what they might be able to do to the Aggies? (And does anyone scare you on our defense?)

All of your RBs scare me, because I watched y'all rush for over 300 yards against Georgia Tech in your win, and we don't have much of a defense. Washaun Ealey and Caleb King really worry me, because I am concerned y'all will be able to control the game on the ground, and keep the ball away from our offense.


For the Aggie fans out there who may have missed the Georgia-Georgia Tech game, here's a bit of what Beergut's referring to.

Defensively, anyone who can pressure the QB concerns me, so Justin Houston and Cornelius Washington worry me. I am hoping the loss of your defensive staff will help us here, but I'm not optimistic.

5. When I talked to you about Mike Sherman's status back in the summer, you said his job was pretty safe, with the minimum expectations being 6-6 and a bowl bid. Now that he's cleared that bar, what are the expectations for the bowl game, and for the 2010 season?

Well, I hope we can win the bowl game, but I don't expect to. Georgia was a top-10 team in the preseason, so y'all have some talent, and beating y'all will be tough. As for the 2010 season, we return a lot of people, so expectations to win 9 games and compete for the Big 12 South are reasonable.

(Thanks to Coach Beergut for participating in this. Good luck, and good health, to both teams this evening.)
Posted by Astronaut Mike Dexter at 9:25 AM