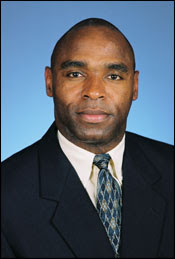 OK, it seems a few people may have missed the point of the thought exercise I posted yesterday (and yes, the Mystery Defensive Coordinator I described was indeed Charlie Strong). The point wasn't to compare Charlie Strong unfavorably to Bud Foster (or to any of the people who've been talked up as candidates for our vacant DC position), and it definitely wasn't to make any comment one way or another on Strong's race. The point really wasn't about Charlie Strong at all; mainly, it was to show just how easy it is to twist facts a certain way when you're talking about a given coach's suitability for a given job. "Facts," as Ronald Reagan once may or may not have meant to say, "are stupid things."

With every candidate who's been mentioned for our DC position, Bud Foster being only the latest, there are any number of members of Bulldog Nation who will step forward to voice their dissatisfaction by picking out bad individual games that candidate had or a less-than-sterling record against a certain opponent. I realize that no candidate is going to satisfy everybody, but at the same time, no candidate is going to be perfect, either. Any coach or coordinator can be selectively portrayed as deficient or downright incompetent if you pick out the right info to tar him with; hell, Charlie Strong is a guy for whom I think any one of us would've been willing to auction off one of our nieces or nephews, yet if all you knew about him was what I told you in yesterday's post, you'd think he was a borderline mental defective best suited for Division III, if that.

By the same token, if all I told you about Willie Martinez was this, this, this, this, and this, you'd be begging us to not only hire Willie Martinez back but give him a raise and a ten-year contract extension. But as David Hale makes clear, Mark Richt didn't let his knee jerk based on individual games when making the (very difficult) decision to fire his longtime assistant and friend. Rather, he did what many of us bloggers have done -- he looked at Martinez's overall body of work over five years, saw the consistently negative trends in terms of yards and points, and did what needed to be done. It was a hard-fought, well-thought-through decision, and I have every confidence that the hiring of Martinez's replacement will be just as thoroughly considered (even more so after reading Hale's post). I hope the rest of Bulldog Nation will be, too.

That includes considering every candidate's body of work as a whole, rather than just deciding "I don't like the look of that guy" and then cherry-picking individual performances to show what a schmuck he is. Everett Withers's UNC defense got clocked by FSU and N.C. State? He still directs the sixth-ranked defense in the country (and managed to help the Tarheels to eight wins despite an offense barely averaging 310 yards a game). Vic Koenning got 66 points dropped on him by Texas Tech earlier this year? He still pulled K-State's wretched defense from 117th in the nation last year to 40th this year (and if never getting unloaded on by Texas Tech is a criterion for being a good DC, Dick Bumpas and Will Muschamp would both be off the list).

It also includes having some faith that Richt is going to make the right decision and not just throw a contract at the first DC who bats his eyes at us. Whether or not you think he's the absolute best choice out there, the fact that we've reached out to (and come so close to snagging) a guy like Bud Foster -- one of the most respected names in the business and a guy whose professional relationship with Frank Beamer stretches back more than 30 years -- shows that we're very serious about this hire and are prepared to spare no expense or effort in finding the top guy. We can debate the pros and cons of individual candidates or suggestions to our hearts' content, but there's no point in panicking or bringing the wrath of god down on any of them (particularly when three out of any four rumored candidates circulated in the mainstream media or blogosphere were probably pulled right out of some writer's ass to begin with).

I leave you with one more thought exercise: Would you be happy with a defensive-coordinator hire whose only previous DC jobs had been at Central Florida, Central Michigan, and DI-AA Western Illinois, and who was rumored to be a job-hopper we might not be able to keep more than three or four years anyway? I'm just saying, it might not be as bad as you think. 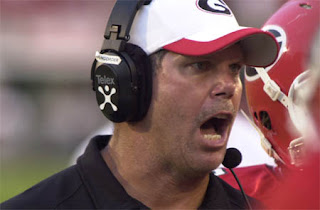 Posted by Astronaut Mike Dexter at 7:05 AM

Great points all around Doug. I, for one, wouldn't even like it if Van Gorder came back... I think that would set us up for failure. He moved on when he felt was right for him and his family, and right now it would seem his only real motivation to come back would be for a bigger paycheck than he could command anywhere else. There are plenty of young defensive minds out there that can successfully revamp our defensive schemes and also make sound hires to fill out the position coaches. Whoever Richt decides on, even if it's a graduate assistant from Northern Montana Community College, I'll support Richt's decision, at least until we see a squad fielded next season.

I don't think your point was lost. It was pretty obvious that you can twist a body of work (if long enough) to say whatever it is you want to say. I think that you should take everything in as whole, yet measure it the way the world golf rankings does. More weight on the most recent victories/losses and fractional weight on those in years past