That's it, the end,
but you'll get over it, my friend. 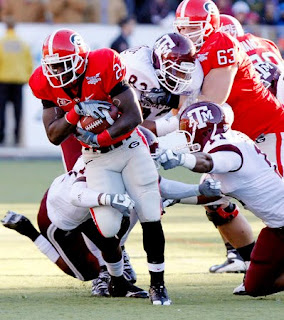 The Indy Bowl was the maiden voyage for the new #24 jersey I got for Christmas. All things considered, it went pretty well.

You'll recall that I sounded hopeful notes following our bowl wins to end the 2007 and 2008 seasons; I won't make the same mistake this time. I know this season, despite the bowl win, still qualifies as a "lost" season in many Dawg fans' eyes, and even as I was driving around Monday afternoon, taking advantage of a few post-Christmas sales before heading home to gear up for the bowl, I realized that the bowl game itself didn't matter much. A win would be nice, sure, but even if we lost -- even if we got blown out by a fairly embarrassing margin -- we could just chalk it up to the turmoil on the coaching staff, close the door on the season, and start preparing for 2010.

I don't know that an assessment as fatalistic as all that necessarily brought me any peace, though, so it was nice to see the team overcome a rather slow start, slough off all the potential disappointments and motivation-killers that had no doubt dogged them throughout the preparations for a less-than-fully-whelming bowl game, and rise up to pound the Aggies every bit as badly as they should have. It certainly wasn't a perfect effort -- no more perfect than 471 yards and 26 first downs would suggest -- but we all figured that this was going to be kind of a track meet anyhow. Give the defensive players (and particularly their thrown-together coaching staff) credit for allowing A&M to spin all that into only 20 points, rarely breaking even after bending that much. 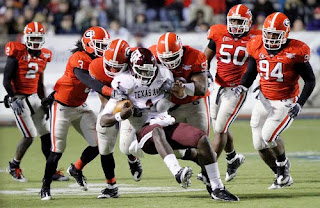 Defense wins the Grace Under Ridiculous Pressure Award, if there is such a thing.

This morning on the AJC's Web site, Tony Barnhart said that Mark Richt "faces the biggest offseason of his time in Athens as he must hire a new defensive coordinator and develop a starting quarterback for 2010. This was a very good win to start that process." I don't know that I buy the second half of that statement -- this win didn't have any more to do with that "process" than, say, our even more significant (and less expected) regular-season-ending win over Georgia Tech -- after which, you'll recall, we still saw fit to unload three coaches. The Independence Bowl was a fun and inspiring end to a season from which, nevertheless, we will be carrying over very little in terms of attitude or mentality.

But that leads into the first part of Barnart's statement, which is absolutely correct: This is the biggest offseason (well, second-biggest after 2001) of Richt's head-coaching tenure. In 2001, Richt took over a program that seemed to have hit a ceiling on offense, largely stagnated on defense, and had consistently recruited loads of blue-chip talent only to fail to develop them into the kind of winners who believed they could compete, and defeat, the best the SEC had to offer; in short, he took over a program that seemed to have run out of ideas. The situation is not quite as dire in 2009-10 -- Richt obviously starts from a much stronger and more stable foundation now, one that he built himself -- but many of the conditions he's operating under are similar to what he faced in 2001. We're still recruiting great talent, but they're not being molded into players with the mentality of champions. I hate to toss out a phrase as vague and clichéd as "They need to get the fire back," but . . . well, that's what I'm gonna throw out there unless someone comes up with a better idea.

In 2001-02, all the talk was about how Richt had led the way in "knocking the lid off" a program loaded with unfulfilled potential. Somehow, in between our run of division titles and now, the lid has been screwed back on, and it needs to get knocked off again. Bringing in a fiery, hard-charging defensive coordinator is a piece of that process, but it's not the whole thing. I hope that over the course of this off-season, Richt and his coaches will take a look back at the transformation that took place in 2001 and 2002, reacquaint themselves with the changes they brought about both in how the players played and how they thought, and use that as a starting point for what needs to happen as we put the gears in motion again to prepare for 2010. 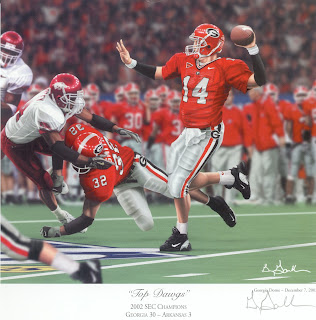 My memories of this are still pretty vivid.

Granted, the conditions in the SEC are not quite the same now as they were when Richt first arrived. The level of competition, I think we can all agree, is higher; Kentucky and Vanderbilt have gone from automatic Ws to teams we have to sweat over just like everyone else. Tennessee had hit the crest of a slope in 2001 and were starting to head downward; in 2009, they've gone through a trough and are once again headed upward, as much as we all might like to deny it. And the SEC West has gone from being the weak-sister division in the conference to being able to make a case that it's the stronger of the two.

But in the short term, the SEC East will be as wide-open as it's ever been. Florida will have lost its once-in-a-generation quarterback and elite coordinators on both sides of the ball -- precisely the kinds of losses that turned USC from a worldbeater into an also-ran this year -- and even their head-coaching situation has taken a turn for the bizarre. Tennessee will have to replace basically both lines in their entirety and their two most critical offensive skill players. Kentucky will likely be breaking in a first-time head coach; South Carolina, of all teams, might have the best shot at being the division's sleeper champion, but . . . well, we've heard that song and dance before. Georgia's not going to be competing for the national title next season, but if we want to make a statement that we've put our recent disappointments behind us and intend to be right back on top of the East in short order, 2010 would be a damn near perfect time to make it.

So let's pat ourselves on the back over an Independence Bowl well played, but let's not act like it really means that much in terms of momentum for 2010. Let's find ourselves some excellent new defensive coaches, but not expect them to be the ones to snap their fingers and solve all our problems. The task of turning us back into championship contenders is too big and complicated for any one player, coach, or game to solve, and it certainly isn't one that can be completed instantaneously; we really won't have any idea how much progress we've made toward completing it until we put toe to leather on September 4 of next year.

But whereas there were times this past season when I found myself dreading that game and the ones that would follow, I'm looking forward to it again, which is how it should be. Now go forth, Mark Richt, and do good. 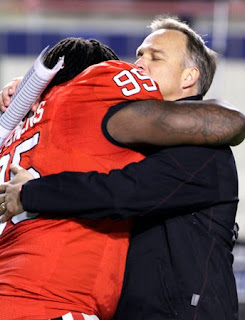 Saw your comment about your new #24 jersey. You know that Ealey is switching to #3 next year, right? Oh well, maybe Da'rick will decide he wants to be #24 for some reason.