After last week's initial rundown of defensive-coordinator candidates ranging from the exciting to the unrealistic to the just plain suicidal, I perused the resulting comments thread, along with a few other blogs that have been speculating on the coaching search. And I came across enough new names that it seemed like a good time for a second round of DC candidates. Most of these guys are unknown-enough quantities (to me, anyway) that I didn't feel confident slotting them into the "want"/"don't want" categories from last time, though, so instead I'm just throwing them all out there as possibilities and letting y'all fill in the blanks in the comments, if you've got any enlightening info or strong opinions one way or the other.

I can, however, take two names I've seen thrown around and strike them off the list post-haste. First, Virginia Tech DC Bud Foster has no Georgia ties that I'm aware of and has been a Frank Beamer disciple for basically his entire career; he's a virtual lock to at least be interviewed for the VT head-coaching job whenever Beamer retires, and even if he doesn't get it, there will be plenty of HC offers coming his way, enough that he doesn't have to worry about making a lateral move. Sorry, but he ain't comin' to Athens. I've also seen people mention Ron Zook, who is, against all conceivable logic, still employed by Illinois, and was mediocre enough as Florida's DC that Steve Spurrier -- whose disinterest in anything other than offense was already well-known -- saw fit to demote him to special teams. I am quite relieved to say we don't need to expend much mental energy hashing out the chances that he'll be coming to Athens, either.

But here are some guys who might yet be on the table:

Manny Diaz
I heard a rumor today that Diaz, the DC at Middle Tennessee State, was on our list of candidates for secondary coach but possibly even for DC. Diaz is currently in his first year as a coordinator after having coached some excellent defensive units at N.C. State under both Chuck Amato and Tom O'Brien.
Pros: He's young and energetic, the kind of guy who could stay at Georgia a long time (assuming someone else didn't try to snap him up first, either for a DC job or a head-coaching position). He's done well in his first year in Murfreesboro, taking a Blue Raider defense that had been frequently awful over the last few seasons and fashioning it into a squad that finished first in the Sun Belt in passing yards allowed, pass efficiency, and scoring D. Not a big name yet, but consider that Brian VanGorder's last three DC jobs before coming to Athens were at Central Florida, Central Michigan, and DI-AA Western Illinois.
Cons: A "diamond in the rough" though he may be, he still doesn't have much experience under his belt, which would make him a puzzling choice for a brand-name program supposedly capable of opening up the checkbook and bringing in a well-established coach. It's a long way from the Sun Belt to the complex schemes and elite-level talent that the offenses of guys like Urban Meyer, Gus Malzahn, and Bobby Petrino would be throwing at him.

Ellis Johnson
Johnson was brought in two seasons ago to turn around a South Carolina defense that had started to sputter. He's also served as the DC at Mississippi State (2004-07, during which time his defenses were about the only thing the Bizarro Bulldogs had going for them) and Alabama (1997-2000).
Pros: With all due respect to Dawgsports' MaconDawg, I think he underestimates Johnson's body of work at South Carolina a little. The Gamecocks were 110th in the country in run defense the year before he arrived -- remember Darren McFadden going over three bills against them in November '07? -- and were all the way back up to 43d after one year of his coaching. Both of his first two South Carolina defenses finished in the top 15 nationally in yards allowed.
Cons: Johnson's defenses may have been the brightest spot on the field for Sylvester Croom's Mississippi State program, but that's not saying much; his best finish in the SEC was fifth overall in terms of yards allowed. And as many good games as he's had at South Carolina, he's also had some real clunkers (56 points allowed to Florida last year; 41 this year to a Georgia team operating at nowhere near full efficiency).

Travis Jones
You may remember Jones as a four-year letter-winner as a defensive lineman for the Bulldogs during the Ray Goff era; he graduated in 1995 and returned two years later as a grad assistant, where he coached future superstars Richard Seymour and Marcus Stroud as freshmen. Currently the assistant defensive line coach for the (undefeated) New Orleans Saints.
Pros: Well, there's the pull of the ol' alma mater, for one. Jones also worked as the DL coach and recruiting coordinator for LSU in 2003 and '04, during which time he coached guys like Chad Lavalais and Marcus Spears on the way to a national title. His recruiting chops would be a huge benefit if, as many people predict, we lose Rodney Garner over the course of this defensive reorganization.
Cons: Would the pull of the alma mater be enough to tear a guy away from a Saints team that's 12-0 and has every reason to think it'll be representing the NFC in the Super Bowl? He may not be interested in even talking to us until mid-January, and that's a long time to be leaving our recruiting efforts twisting in the wind. Has been in the NFL ever since joining Nick Saban's jump from LSU to the Miami Dolphins in '05 and may have his eye on an upward path through the pro, rather than college, ranks at this point.

Vic Koenning
Currently the co-defensive coordinator and DBs coach at Kansas State, Koenning's experience on the defensive side of the ball stretches back nearly 20 years and includes stops at Wyoming, Troy, and Clemson.
Pros: Koenning's defenses at Troy, Clemson, and K-State have all been terrific. Only twice have his squads finished outside the top 20 nationally in total defense -- his first year at Troy, which was only the program's third year in DI-A, and this year at KSU, in which he still managed to haul the Wildcats from 117th in the country in total D up to 39th. Has probably gained at least a passing familiarity with our recruiting area from four seasons at Clemson.
Cons: Supposedly he bolted Clemson for KSU because Clemson wouldn't give him the head-coaching job; that and his three years of experience as Wyoming's head coach (even though he only went 5-29) lead me to believe he'd only be interested in upward moves from here on out -- particularly now that he's coaching at his alma mater and thus has a good shot at the Wildcats' top job once Bill Snyder, who just turned 70, retires. 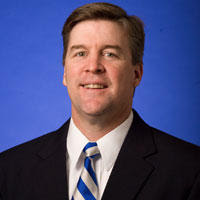 Mike MacIntyre
Second-year defensive coordinator at Duke University and, as of November 18, your reigning National Assistant Coach of the Year. Was a grad assistant at UGA while earning his master's here in 1990 and '91.
Pros: Well, the National Assistant Coach of the Year thing is a pretty big one. Duke's national ranking of 66th in total yards allowed isn't spectacular, but it's not bad considering the paucity of talent on the Blue Devils' roster, and it's a damn sight better than where they were before he arrived (92d in the nation, giving up 424 yards per game; that figure is down by more than 50 yards for '09). Also coached under Bill Parcells for four years with the Dallas Cowboys.
Cons: Do we really want to hire a guy who only has two years of experience as a coordinator? Do we really want to go poaching anyone off of Duke's coaching staff at all? And grad degree notwithstanding, do we want to hire a guy who got his bachelor's degree from Georgia Tech (and played there as a free safety and punt returner in '87 and '88)?

Bob Sanders
Presently serving as defensive coordinator (though who knows for how long, now that Dick Jauron has been fired) with the Buffalo Bills; before that, he was defensive coordinator and DEs coach for the Green Bay Packers. Before that, he spent 11 seasons on Steve Spurrier's staff at Florida, where his defensive lines ground us into hamburger on a regular basis.
Pros: In his capacity as a DL coach, his lines have been almost uniformly terrific; mentored a trio of NFL first-rounders (Jevon Kearse, Kevin Carter, and Huey Richardson) with the Gators. Soon to be available, too, given the state of flux in Buffalo.
Cons: Hasn't coached college ball since 2000, and as we've seen, success in the NFL doesn't necessarily translate into (and has been, in some cases, a hindrance to) success at the college level. Less consistent as a coordinator than he was as a DLs or LBs coach; the Bills, for instance, are dead last in the NFL in run defense at the moment and only midpack in QB sacks. Also has the taint of a stint at Georgia Tech on his record, even if it was a long time ago (heh, "taint"), and at 56 years old he may not be the kind of energetic firebrand we're looking for.

So there are a few more names for you to toss around -- I'd be interested in hearing your thoughts on them in the comments, along with, as always, any new suggestions you might have. With recruiting heating up and ratcheting up the importance of getting a name locked down, I expect we'll be hearing rumors ramp up accordingly over the next couple weeks.
Posted by Astronaut Mike Dexter at 6:21 AM

I want you to know that your analysis on these gentlemen is very thourough and thought provoking. I was weighing the options as you outlined them, and had a good train of thought going on how the team might come out of this. And then you hit me with "heh, taint", and the 12 year old in me took over, and I lost it. Well played, sir.

They will
1) Not get any sacks, despite the talent on the field
2) Not get off the field on third down
3) Give the receivers a significant cushion at all times.

Yeah, you can go look at the stats and think "hell yeah, top 20 D!" What you're going to get though is a defense that you have no confidence in on third down or any time during the fourth quarter. This D looks great with a significant lead, but it's not going to win you a football game.

So what do the BCS title game teams and the NFC champion all have in common now? Georgia grads on their defensive coaching staff. And we kept Martinez for FIVE YEARS.

Do we really want to go poaching anyone off of Duke's coaching staff at all?

David Cutcliffe says hello, and reminds you that he owns your ass.