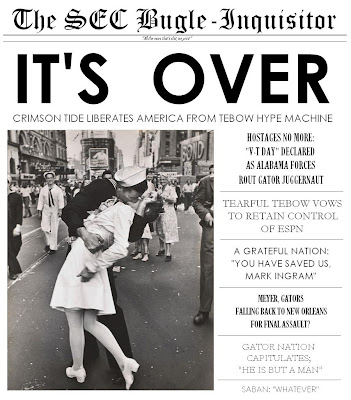 ATLANTA, GEORGIA -- As the explosions of the epic Alabama-Florida battle were gradually silenced on the frigid plains of the Georgia Dome, a new commotion arose -- the voice of a freed people celebrating their liberation from a once-unstoppable force:

The brave, crimson-clad soldiers of Alabama's most elite fighting force did more than vanquish Florida's feared Gators -- they unshackled an entire nation, set free a society that had spent four long years under siege from an inescapable despot that reached into every aspect of their lives to control them. The Tim Tebow Übertreibungswaffen that had subjected them to the most sickening depths of hype and overexposure finally lay in smoldering ruins, and football fans across the country were free to rejoice.

"I dreamed this day would come," said Atlanta resident Georg Kozpecl, who identified himself as a member of the "Red and Black Resistance Army" that had fought the Tebow machine with only sporadic success over four grueling years. "Finally, my family will be able to watch 'College Gameday' without being subjected to the grinning idiot's face or hearing people laud his 'humanitarianism.' Lies, I tell you. His reign has been filled with nothing but cruelty, and we are grateful to God almighty to be freed of him."

Fans of teams across the Southeastern Conference and, indeed, the totality of Division I-A took to city streets all over America, shouting "Long live players other than Tebow!" and slapping posters of the Florida quarterback with the soles of their shoes. A statue of the 6'3", 240-pound Tebow erected in Bristol, Connecticut -- headquarters of the quarterback's massive propaganda operation -- was toppled by a mob of citizens sometime Saturday night.

The location of Tebow himself is not known at this time; he is thought to have retreated to his base of operations in northern Florida, perhaps to plan one final assault on New Orleans, the Bugle-Inquisitor has learned. However, rumors continue to spread like wildfire that Reichsführer-UF Urban Meyer has fallen ill, potentially cutting off the head of the Gator war machine. In addition, Thom Brennaman, Deputy Reichsminister of Propaganda, has been found dead in his basement, dead from a self-administered cyanide pill.

CRIMSON TIDE EFFICIENT, "RUTHLESS" IN ONSLAUGHT
Those who witnessed the Alabama fighting force spring into action in the streets of Atlanta told of a well-oiled machine that was "ruthless" in dispensing with both the offensive and defensive forces of the once-invincible Gators. Lieutenant General Mark Ingram drove fearlessly across the Georgia plains, mowing down defenses once thought to be impregnable, while General Greg McElroy supported the invasion with the rapid establishment of air superiority and (continued on page A-3)
Posted by Astronaut Mike Dexter at 2:13 PM

Email ThisBlogThis!Share to TwitterShare to FacebookShare to Pinterest
Labels: football, gettin' my gloat on, miscellaneous stupidity

That is some of your best work.

Better than anything I have seen from Orson. (I intend that as a compliment)

I think I just wet my pants. If there was a Heisman for commentary, some Yankee Defensive back would steal it from you at the last minute.

This is the funniest post I have read this college football year.

All well and good, but it's still ok to hate Alabama, right?

I actually wish the (A-3) was a link to the rest of the article. Awesome.

I have been reading your blog for a couple years. I find it informative and at times freaking hilarious. I didn't think that you could top your "olive garden confidential" series or you description of the meth head cock blocking you with Ms. Birmingham. However, you have proved me wrong. V-T day is pure comic genius. Keep up the good work.

Once again Doug, you have made us all proud you are a DGD! Best post of the year by a lot. Gives a little credence to the old adage that hard times is the artists best friend. Here's to wishing you some good times, Merry Christmas and a suitably celebrated New Year's.