Conference-championship games (and a few others) were played, Tim Tebow's tears were shed, Evan Williams egg nog was consumed straight from the bottle. This will be the last BlogPoll ballot before the final submission after the bowl games, and since there were so few games of actual consequence, the changes to the ballot will be slight (and there will be no new SEC Power Poll ballot this week either). But anyway, here's what I was able to cobble together:

Games watched: Oregon-Oregon State, Alabama-Florida, flipped back and forth between Texas-Nebraska and Georgia Tech-Clemson.

· Alabama jumping into the top spot shouldn't be too controversial; frankly I'm surprised that anyone at all would have anyone above them (even though five voters in the coaches' poll did). Moving TCU above Texas despite the Longhorns' Big XII title win might be, but I stand by it: Texas has looked lousy in two straight games now, and they were two games in which the 'Horns should've been putting up their very best effort(s), knowing that the national-title hype spotlight would be aimed squarely at them. It's one thing to screw around for a quarter or two and then mercilessly pound an opponent, as UT has done numerous times this season; it's another to get chased into the final minutes by a pair of Big XII also-rans. I don't think that kind of effort would permit Texas to outlast a team as talented as TCU, and it's certainly not going to do anything against Alabama in a month's time.

· Georgia Tech jumps back into the top 10 thanks to their ACC title win, which I'm probably giving them too much credit for (it is the ACC, after all), but at the same time there's really no reason to rank them below Virginia Tech at this point. 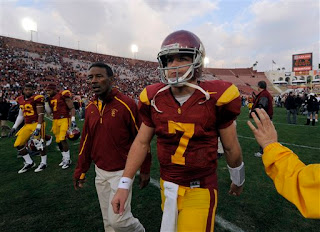 · California and Southern Cal each take a seven-point dive for losing in embarrassing fashion in the final week of the regular season (USC's ended up in the Emerald Bowl, did you hear?), and thus begins discussion of teams who maybe shouldn't be ranked at all. How much credit do the Golden Bears and Trojans deserve for playing in a tough conference when their record in said conference is only 5-4? Are Ole Miss and BYU really deserving of their rankings, and if not, who deserves to go above them? I actually raised Nebraska two spots for nearly pulling off what would've been the biggest upset of the weekend, but should I drop them out of the poll entirely for fielding that godawful offense?

· In the end, I only dropped one team off my ballot entirely -- Houston, for finally coughing up one inexplicable upset too many. The Cougars can only coast on their early Big XII upsets for so long when they start losing games like this to beatable C-USA opponents. They're replaced by Dan "Rust Belt Tebow" LeFevour and his Central Michigan Chippewas, who actually won a conference title this past weekend.

Thoughts? Suggestions? Outrage? All reasonable offers will be considered between now and the final submission deadline on Wednesday morning.
Posted by Astronaut Mike Dexter at 8:40 PM

THIS IS IRRELEVANT TO THIS POST, BUT JUST SO YOU KNOW: http://www.hulu.com/mystery-science-theater-3000