A few years ago, I was in my hometown of Columbus, driving down Reese Road in the direction of Manchester Expressway, when I saw a couple teenage kids driving a red early-'90s Honda Civic coupe. It had a big spoiler on the back and a full complement of air dams, side skirts, and what have you -- its owner had pretty obvious designs on turning it into a "Fast and Furious"-style rice rocket. Only he hadn't gotten around to upgrading the rims or tires yet, because it was still riding around on the stock steel wheels and plastic Honda wheel covers, which combined with the big spoiler and ground-effects bodywork made it look weirdly top-heavy. The coup de grace, if you will (and I do), was the decal that ran across the top of the back window: It read "TO LOW FOR A FAT HO," and yes, that's how it was spelled.

And actually, it hasn't, because as I was rolling into C-Town this past Wednesday afternoon for an extended-weekend stay with my folks, I wound up behind this vehicle at a stoplight on Manchester. I had to snap a picture of it with my iPhone, so the resolution is not great and you may not be able to read the stickers I'm talking about, but here's the picture: 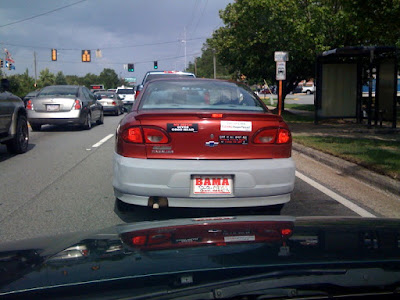 And the three stickers read as follows, clockwise from left:

· MY BITCH GIVES GOOD HEAD
· Do I LOOK Like A FUCKING People Person?
· LIFE IS ALL ABOUT ASS: COVERING IT, KICKING IT, KISSING IT, OR TRYING TO GET IT

Note also the putty-gray aftermarket bumper, another clear sign that this car is destined for "Fast and Furious" duty but the driver just hasn't been able to pony up for the spoiler or the rims yet.

You're all class, Columbus. Yet you do have plenty of great barbecue restaurants, a nice historic district, and a Chili's . . . I wish I knew how to quit you.
Posted by Astronaut Mike Dexter at 4:35 PM

I've seen that TOO LOW FOR A FAT HO car in Columbus.

There are only two things I miss about that town. Barbecue is one of them. I wish there was a Smoky Pig and/or Chicken Comer franchise in Midtown Atlanta.

Wonder how long he's been rollin with that cardboard dealer drive-out tag? The true badge of the marginal.

Columbus is like a bad heroine addiction...all you need is a little taste and you keep wanting more and more.

Although I could easily use a mainline of Mike and Ed's.

I almost took a teaching gig at Georgia Southwestern State in Americus. My husband and I figured Columbus would be the largest "city" we could live in and still have an easy commute. I took a job in Milwaukee instead.

You know, Columbus has the same apeal that Tallahassee has for me (except for the fact that i don't have family from there, which certainly lowers it's appeal.) You see stuff like that everywhere.

The most intriguing thing I think I ever saw was a beat up Monte Carlo, painted bright green, but the best part was that the "MONTE CARLO" in the back had been (poorly) modified with pliars to reveal it to say "MON E CAR O." Hells yes.

classic.
i was just there...o fountain city, where are thy fountains?
i wanted to photograph a jacked up pickup truck. it was so tall it almost didn't clear the red light. the antenna didn't clear it. it had a dixie flag sticker LEST WE EVER FORGET.