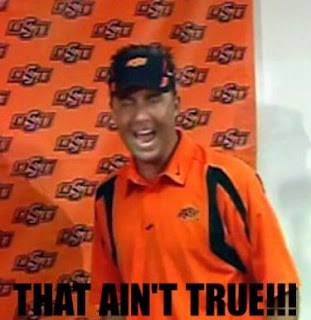 15. Oklahoma State
I realize I'm dooming Georgia to the fifth circle of Hell for putting the Cowboys down here -- that's the circle reserved for overconfidently premature trash-talkers, the wrathful, and women who don't reciprocate oral sex -- but sorry, Pokes, I'm just not that into you. Yes, we're all impressed with your sexy offense and your dual-threat quarterback, but that QB has exactly one proven WR (Dez Bryant) because the others were all dismissed for fairly embarrassing reasons, and meanwhile, your defense? Has never finished higher than 89th in the country in total yards allowed since Mike Gundy got there. I'm not going to make any highly specific predictions about the Georgia-OSU game at the moment, for that way lies only madness, but I will advise Cowboys fans not to get their hopes up about any BCS bowls. 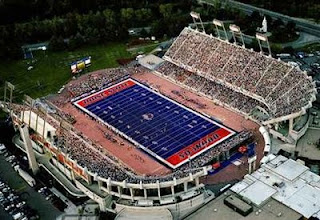 14. Boise State
As Dr. Saturday, Holly, and I discussed a few weeks ago, Boise State is the only mid-major with legitimate grounds for expecting a BCS bid rather than just gazing wistfully out the window and hoping for one the way one would hope for world peace or a pony. But that has more to do with their schedule than anything else, which their #14 ranking here should indicate. Would they "deserve" a BCS bid by "conventional standards," and am I only using these "scare quotes" to try to "bully" you into thinking they "probably wouldn't"? I have no idea what you're talking about, "assface." 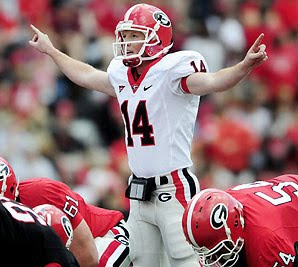 13. Georgia
I promise you this is only a coincidence and I didn't deliberately rank Georgia at #13 just because both the USA Today and AP polls did. I think 13 is a pretty good place to be: far enough out of the top 10 to discourage runaway preseason hype, but high enough that they're not having to claw their way out of a deep hole; a win here, a win there, and all of a sudden the Dawgs are being treated as a contender. That's "contender" in the generic sense -- they're not going to contend for an SEC title as long as the Gator juggernaut is taking up all the oxygen in the room, but I'm convinced this team has a chance to duplicate last season's 10 wins despite the losses of Stafford and Moreno. The mere fact that I said that out loud significantly increases the chance that the Dawgs will get donkeypunched by a score of like 48-24 at Oklahoma State in a couple weeks, because that's just how my life has been rolling lately, but still. 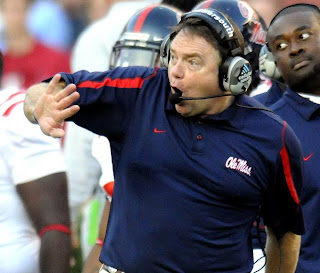 12. Ole Miss
Of the pundits' trendy preseason dark horses, I obviously buy Ole Miss more than I do Oklahoma State, due to their more proven coaching and the higher likelihood that the Rebels will actually field a defense this year. But we've all seen the "performs better when expectations are low" story play out before, not to mention its weak-chinned fraternal twin brother "wilts when expectations are high," and while those may be annoying clichés, that doesn't make them untrue. You can talk about last year's win at Florida all you want, but it's probably unwise to mention that without at least paying lip service to games like the home loss to Vanderbilt or the road almost-loss to Arkansas. The returning talent on this roster is enough to make me believe the Rebels will be a little less prone to those types of performances this time around, but not enough to get them into the SEC title game. 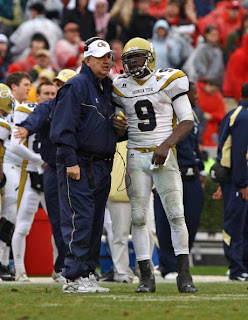 11. Georgia Tech
Yes, it fucking kills me, as I'm sure it fucking kills the rest of you, but Georgia Tech needs to go above Georgia in the polls for the time being, folks. Yes, I believe that Tech will find it harder to bedazzle people with their triple-option magic than they did last year, and yes, I believe Georgia's defense has a lot more talent and ability than they displayed down the stretch last season. But the only evidence I've got to hang that on is a good game against a resolutely vanilla Michigan State offense in the bowl, which is pretty well balanced out by the acid flashbacks I still have of Georgia players literally bouncing off Jonathan Dwyer last November. (WRAP UP, you flailing, shoulder-bumping maggots.) So until I see something substantial from either the Jackets or the Dawgs to wipe out the latter image, Tech has droit de seigneur here. See, Techies? Don't say I never said anything nice about ya. And now that I've jinxed you good and proper, eat a dick.

Tomorrow: We enter the top 10.
Posted by Astronaut Mike Dexter at 8:32 AM

I'm not sure what I love more about that picture of The Ginger Ninja. That he appears to be (a) standing between lineman rather than behind and shouting "I'll chop block that defensive tackle myself...Hugh Nall style!" or (b) floating roughly six inches off the ground ready to crane kick your face off.

How ridiculous was that paragraph? Not as ridiculous as all the preseason hype Ole Miss is getting.

Ha ha! My word verification word is churb. Paul Johnson is a churb.

Be of good cheer: Hinton has y'all a) also at 13, which makes you b) a full ten spots above Tech. And he's the smartest.

(That's about where I'd put them too, frankly; I think you're being too gracious after last season's debacle. A year of game tape on that scheme will make a world of difference to opponents.)