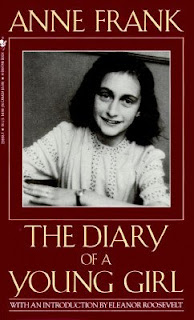 I went in for what will hopefully be my final back surgery this morning, so I'll be out of commission for a couple days. To tide you over until my return, here are some exclusive scenes from David Mamet's forthcoming film adaptation of "The Diary of Anne Frank."

Stop. You had me at "Fuck it anyway."

I'm smelling one of three things for this excellent work: a Sugarman Award, a Sami Rohr or the Koret Jewish Book Short-Story Award.

I'm sure this would be even more impressive if I'd ever seen Glengarry Glen Ross. But it's plenty impressive anyway.

The single biggest compliment I've ever heard offered is "I wish I had thought of that."

I wish I had thought of that.