The preseason AP sportswriters' poll was released over the weekend, so now the coaches and pundits both have their preseason picks in place -- and so do I: Thus begins another season of participation in MGoBlog's famous Blog Poll, the first edition of which will be up on Wednesday.

I'll be issuing my preseason ballot five at a time over this coming week in highly stream-of-consciousness fashion, influenced by a possibly unwise combination of George Dickel and muscle relaxers, but first, here are the five that fell just outside my final top 25 list:

Rutgers -- Wow, this ended up being the only Big East team that even came close to getting in here. That is gonna be one butt-ugly league this year, but a conference title is a conference title. I guess what that means is go ahead and slit your wrists now, Orange Bowl organizers, because it's gonna be Hokies-Scarlet Knights on January 5.

Southern Miss -- Nineteen returning starters on a team that was hitting on all cylinders by the end of last season, yet they only got a handful of votes in each of the preseason polls. Fewer than UCLA. Fewer than Auburn. If I were a USM player, that kind of insult would be enough to motivate me to muder someone on the field.

Kansas -- Would be a serious contender for the Big XII North title if they didn't draw Texas, Oklahoma, and Texas Tech out of the South. But nobody gives a crap who wins the North Division anyway, so this hardly qualifies as a crushing loss.

Iowa -- Another shitty offense, eight starters back on defense. That qualifies as sexy talk in the Big 10, and could be enough to put the Hawkeyes in third place by the end of the season.

Texas Tech -- I asked the question in a Dr. Saturday roundtable a few weeks ago and I'll ask it again: Does anyone seriously think a Mike Leach offense is gonna go in the tank just because they lost Graham Harrell and Michael Crabtree?

And now The Show, the honest-to-goodness top 25, starting at the bottom and working our way up: 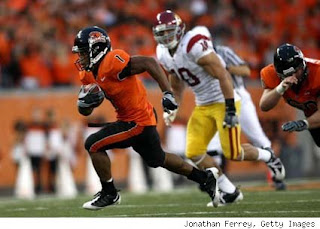 25. Oregon State
You know them as the team that makes USC look merely mortal every other year. They have to go to L.A. to play the Trojans this October, so this isn't going to be one of those years. But they do bring back two awesomely named skill-position players: Jacquizz Rodgers, the jockey-sized running back who torched USC last year, and split end Darrell Catchings Jr. Think about that for a second: a receiver named Catchings. That's like having a quarterback named Colt Passington or a cornerback named James "Speedy" McPicksix, and is a clear sign that the Beavers have another special season in store for them in '09. 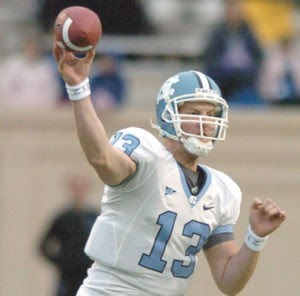 24. North Carolina
Let's make one thing clear -- any respect I give UNC is grudging at best, since they wait-listed me when I was applying to colleges back in high school and I've never quite forgiven them. But I will say this for the Tarheels: Unlike Syracuse, they're smart enough not to start a Paulus at quarterback just for shits and giggles. Backup Mike Paulus, Greg's younger brother, subbed in for an injured T.J. Yates last season during the Virginia Tech game and singlehandedly killed the 'Heels' chances by going 3-of-8 for 23 yards and two picks, so you know they're not anxious to try that experiment again. 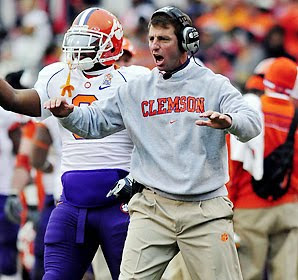 23. Clemson
I'll be honest, I hate putting Clemson here. Nothing against them, but I tried every way I could think of to keep from putting them in the top 25 at all, mainly because I just don't trust Dabo Swinney as a big-time head football coach. Yeah, he went 4-3 with the Tigers last year after taking over for Tommy Bowden, but you know who else won 57% of his games? Tommy Bowden. I guess the fact that I still gave them a top 25 spot indicates that I'm open to the prospect that they might have too much sheer talent for even a questionable coach to eff it up entirely, but we'll see if that's still the case after they get whacked at Georgia Tech on the second Thursday night of the season. 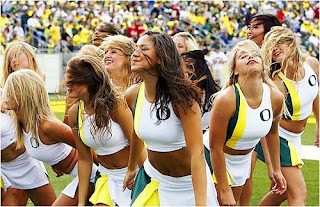 22. Oregon
I kinda hate putting Oregon here, too -- really, it was probably the cheerleaders that put them over the top. But the more I read about the team, the less jazzed I get: New coach, only 10 returning starters, yet nearly everyone in the preseason top-25 composite had them top 15, and they're still clinging to 14/16 spots in the official preseason polls. Since when was only one returning starter on both lines a recipe for success? I'm not convinced these Ducks could control the trenches against the AFLAC duck at this point, and that duck's been nursing a hamstring injury off and on for the better part of a year. (You hadn't heard that? I'm not surprised; being from Columbus, home of AFLAC's world headquarters, I get a lot of the insider information that the rest of the world isn't privy to.) 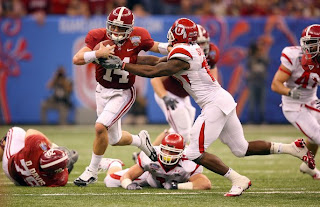 21. Utah
Their quarterback is gone, as are their top three receivers, which I guess is pretty much their entire passing game, more or less. But they still have the poo-stained boots from the time they put a foot in Nick Saban's ass, and you can't take that away from them. Not to mention a rover named Stevenson Sylvester (shown above putting the fear of God into John Parker Wilson). Say that out loud a few times: "Rover Stevenson Sylvester." That's pretty fucking smooth. I would say I didn't know people in Utah knew how to get down like that, but his bio says he's from Vegas. Figures.

Spots 20 through 16 are on deck for tomorrow. Suggestions, dissents, and boob shots always welcome in the comments.
Posted by Astronaut Mike Dexter at 11:50 AM

Trust your gut (and the booze therein). My '08 rationale for Clemson being overranked, you'll recall, was "Because FUCK Clemson, that's why", and that seemed to work out pretty well.

Hey! The BE may suck balls, but at least the Scarlet Knights have shown they can travel, party, and put on an entertaining bowl performance. I'm looking at you, Pitt.