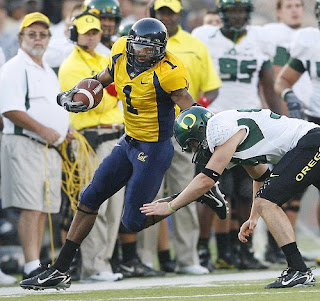 10. California
I found out long ago, it's a long way down the Holiday Bowl -- Holiday Bo-oooo-o-o-o-o-ooo-o-o-owl! The Cal Bears are the football equivalent of "law school hot": They're "Pac-10 hot," as in "pretty hot for a team that really offers no reason to think it will put a dent in Southern Cal's domination of the conference." Their quarterback pretty much sucks, but they look pretty stacked everywhere else. And I would hold out a glimmer of hope for them shocking the world with a league title -- if I didn't think, based on their track record the last couple years, that even if they did beat USC at home the first weekend in October, they'd only go right out and follow that up with something stupid like a loss at UCLA or Arizona State, thereby letting USC right back in the door. 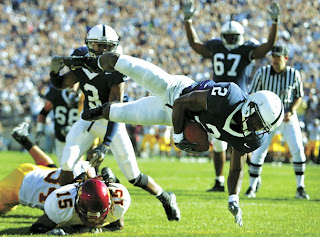 9. Penn State
I had Ohio State ranked above Penn State in my first draft of this, and then I started having doubts, so I flipped a coin. The coin flip said Ohio State, so I was relieved, knowing that I wouldn't be guilty of sending any mixed messages here. I've seen a surprising number of people ranking the Nittany Lions above the Buckeyes in their preseason Big 10 projections, and I was tempted to do that too, but the Nits have lost half of last year's starting defensive front and three of five on their O-line, which doesn't sound like a recipe for Repeat BCS Appearance to me. He would never say this out loud, but secretly Joe Paterno is happy with that, because the climate agrees with him down in Orlando and it's closer to his kids, not like Pasadena with the forest fires and the gay clubs and the loud music and whatnot. 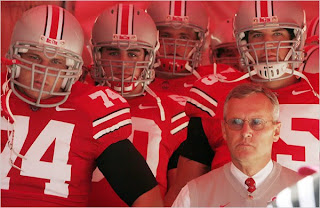 8. Ohio State
What's shocking and discomfiting about Ohio State's offensive frustrations over the past few seasons is not the mere fact that they weren't any good; it's the fact that they were running such a plain, conservative offense and still sucked at it. I mean, that's like getting a job at Baskin-Robbins and managing to fuck up vanilla. How the hell do you fuck up vanilla? All that said, bitching and moaning about the Buckeyes having a shitty offense is kind of like complaining about airplane food -- just like you don't choose Delta for the cuisine, you don't watch tOSU for their offense: Just sit back and shut up, and in three hours this'll all be over. I choose the Buckeyes as this year's Big 10 champion because in difficult economic times like these, you go with safe, conservative investments, and I can't think of any team safer or more conservative than Ohio State, who probably wets their pants with excitement anytime they even get close to 40 points but can make damn sure nobody else gets to 20. 7. Alabama
Fuck. I just got done saying how shaky Alabama looked as a top-five team, and yet here I have them at number seven. My excuse for that is, naturally, that I'm a pussy: I was worried that if I knocked Bama down below the two Big Ten teams immediately following them, Alabama fans would throw bricks or something really gratuitously heavy, like Andre Smith, through my window. I don't need that kind of anxiety in my life, so here you go, Tide Nation, number seven is yours. Don't go doing something stupid with it like losing to . . . 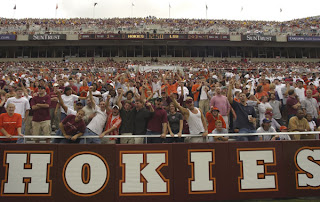 6. Virginia Tech
This is where it gets super fun for you readers, because it's the part where I'm like "No really! Virginia Tech is gonna be in the mix for the national title this year!" and y'all are like "Ha ha, yeah, whatever, they suck" and I'm all, "No, guys, come on! They always play great defense and this year they've got this guy or that guy on offense" and y'all are like "Dude, they play in the fucking ACC, give it a rest" and I'm like, "Come on, Tyrod Taylor! He's a future superstar!" and y'all are like whatever and I'm like fuck you then and what does Tech proceed to do but get blasted into Dorito crumbs by the first solid, elite-bowl-aspiring team they face. And you're in luck this year, because they get just such a team in Week 1 in the Georgia Dome, which means you get the whole rest of the season to tell me what a fag I was for picking them in the first place. You're welcome in advance.

Tomorrow, the big finale and the top five.
Posted by Astronaut Mike Dexter at 3:05 PM

I can attest sir, and provide photographic evidence, that girls in law school can be pretty damn hot.

Yeah, I remembered the exception to that phrase right after I posted this. My apologies.

I second Zen Bubba's comment. Here at Duke Law, we bring the hotness.