Once again, MGoBlog proprietor/BlogPoll founder Brian Cook has (mis-)placed his trust in me to do the season's first BlogPoll roundtable, in which I get to stick my neck out and make a bunch of statements that have at least a 50-50 chance of looking dumber than dirt a few months from now, then all of you get to do the same. We only have THREE DAYS LEFT before the season actually kicks off, so let's get this thing started:

1. Without naming names, a few teams seem to have popped up frequently on everyone's "overrated" lists in the preseason, so let's forget about them for the moment and concentrate on a different group: sleepers. Which currently unheralded team are you currently putting at least a few of your chips behind in the hopes that you'll be able to say "totally called that" once they've accomplished big things by the end of the season?

Well, I put N.C. State at #19 in my preseason BlogPoll ballot even though both of the "official" polls relegated them down into the middle of the "others receiving votes" rabble -- they'd be 39th in the AP poll and 43d in the coaches', if we counted that far -- so I guess that makes the Wolfpack my top sleeper for this season. They've got a talented QB, Russell Wilson, who made phenomenal strides last season, as well as a defense that made similar strides and brings back five starters in the front seven; they've also got a favorable schedule that includes eight home games, beginning with a four-game out-of-conference homestand that has two I-AA scrubs sandwiched between South Carolina and Pittsburgh, both of whom are question marks. If the 'Pack sweep those, they could be 7-0 going into their midseason bye, and after the bye week comes a trip to FSU on Halloween, where they've split their last four visits. The only game the Wolfpack really need to be dreading is a November 21 trip to Virginia Tech, and it's not outside the realm of possibility for them to be eyeing a rematch with the Hokies in the ACC title game two weeks later. 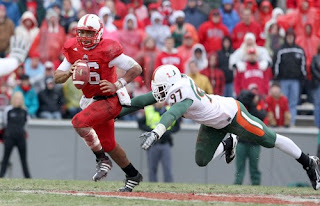 2. In a similar vein, pick a sleeper player on your team whom nobody's talking about right now and tell us why we will be talking about them by December.

You really had to be paying close attention to the box score to know who Aron White was last season -- he caught Georgia's lone touchdown in the Florida debacle, and caught another TD that helped break the Capital One Bowl open for the Dawgs -- but he is the latest in a series of impressive physical specimens Georgia has had at tight end. Two factors point toward White making a name for himself in 2009: One, the suspension of starting tight end Bruce Figgins means White will more than likely have that position to himself for the first six games, and two, a healthier and more solid offensive line likely will reduce his blocking responsibilities somewhat and free him up to do more pass-catchin'. Experienced receivers in general are going to be at a premium on the Georgia roster, too, so White could be a nice safety valve in blitz situations.

Another guy who's hardly a household name right now but could be by year's end: tailback Richard Samuel, who worked his way up through the depth chart over the offseason and was a bit of a surprise pick for the starting RB job earlier this month. Samuel rang up a 5.1-yard-per-carry average last year and will also benefit from a sturdier offensive line this season. Which is not to say any of us are going to be forgetting about Knowshon anytime soon, but the backfield situation in Athens may not be quite as dire as you've been led to believe.

3. Florida is about as big a consensus favorite as we've seen in recent years, but remember, USC got 62 out of 65 first-place votes in the AP's 2007 preseason poll and still managed to lose to Stanford. Given how difficult it is to go undefeated period these days, where do you think the Gators are most likely to stumble in the regular season?

I think the October 10 trip to Baton Rouge has to be the most obvious answer here, but even if the Gators succeed in knocking off the Tigers for the second straight year, they'd better take care not to relax too much when they get home: Their next opponent, Arkansas, should be packing just enough firepower on offense to make a game of it if the Gators come out sloppy. (And forgive me for gratuitously plugging my own guys here, but Georgia has a bye before the Florida game this year, just like they did two years ago, and are 7-1 all-time against defending national champions. Just saying.) 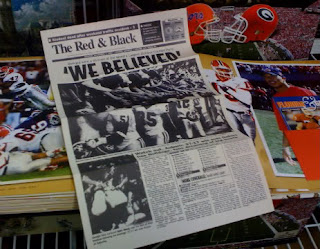 4. Which regular-season game not involving your team or conference are you most looking forward to this year?

As many of you already know, two of my best friends from college and I have made a tradition out of going to one big non-Georgia rivalry game each season just so we can say we've experienced it. Our first two outings, Ohio State-Michigan in '07 and USC-Notre Dame in '08 were duds as far as the games themselves were concerned, but this year I think we've picked a winner -- the Red River Shootout, Texas-Oklahoma for all the marbles. Well, a substantial portion of the marbles, at least. I fully expect this to be the de facto Big XII championship game, as it's been for four of the past seven seasons, but this year it could be a play-in for the national-championship game as well -- and with the Longhorn fans still fuming over being left out of the 2008 conference-title bout, this year we've got the added ingredient of some weapons-grade revenge-lust on the part of the 'Horns that's going to make "Inglourious Basterds" look like a Thomas the Tank Engine movie. It's going to be quite a weekend in Big D, and I vow to come back that Sunday with one of two things: a pair of hot pants from a Texas pom girl or a photo of me giving Tony Romo a pair of Norwegian goggles.

5. In honor of Georgia's opening-weekend opponent and their most prolific booster, let's say you somehow come into T. Boone Pickens money and can buy anything you want for your program -- facilities upgrades, an airplane for recruiting, buy out the contract of that coach you hate, you name it. Where does your first check go? 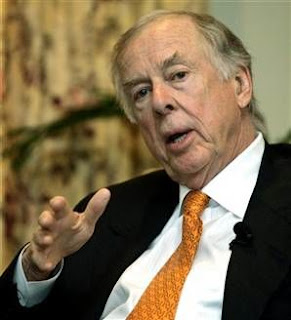 "That's your private jet? But it only has two engines."

Last week's $333,000,000 Mega Millions jackpot probably would've been worth about $210 million if I took the cash option; knock off $90 million or so in federal taxes and I'd still have more than enough to give UGA three million to endow a dedicated special-teams coaching position at two hundred grand a year. Currently, those duties are split haphazardly amongst three different assistants, with defensive-ends coach John Fabris taking a lot of offseason heat from Bulldog Nation for our lackluster performance in kick and punt coverage over the past couple years. I say hire a dedicated ST coach and clear up the confusion once and for all. (My first choice, coincidentally, would be to bogart Joe DeForest from Oklahoma State, which would really piss off T. Boone.)

Job number two would be extending the third deck all the way around the east end zone to the skyboxes and bumping capacity up over 100,000 once and for all. I figure a donation like that would at least get my name on the field somewhere. Doug Gillett Field at Sanford Stadium has a nice rhythm to it.

Respondents, if you wouldn't mind, throw a link to your answers in the comments thread, and I'll try to include them in a roundup next week.
Posted by Astronaut Mike Dexter at 12:13 PM

Doug,
I agree that Aron White will do great things this season, but he won't have the job by himself because true freshmen Orson Charles and Arthur Lynch have both showed that they are ready for the field and will get a share of the playing time. The great news is that White and Charles will create mismatch issues for our opponents because they are both tall, athletic and fast. Can't wait to see the TE become a dangerous weapon again for the first time since Leonard Pope's 10' frame roamed the field.

From Old Virginia chimes in here:

My answers to your excellent questions: http://www.collegegameballs.com/2009/09/01/preseason-blogpoll-roundtable-sleepers-statement-games-and-spending-money/

Maybe I am wrong, but doesn't the NCAA limit the number of coaches you can have salaried on a staff? I don't think a lack of money is the reason we don't have a dedicated special teams coach. Now, if you want to buy the NCAA I am all for it, but it's gonna take more than your post tax winnings from the next Mega Millions jackpot.

Here are From The Rumble Seat's responses:

Here is BC Interruption's response: