The Friday Random Ten+5 takes a moment to enjoy the smell of its own farts. 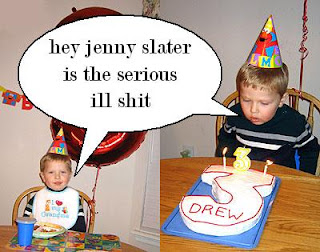 So basically I've been strutting around this past week like the Ron Jeremy of the blogosphere, and I'm gonna continue strutting today, because this week's +5 is going to take us on a fantastic voyage through the last 12 months' worth of stuff I've spewed up onto this site. Bear with my self-obsession a few minutes' more, dear readers, because on this Friday morn I'm marking three years of Hey Jenny Slater with my Five Best Posts From The Past Year:

Friday Random Ten+5: I put myself out there. (July 19)
This post marked a milestone of its own: For the first time I confessed publicly to having secret hots for both cartoon auto-insurance pitchwoman Erin Surance (above left) and the then-still-just-short-of-legal Hayden Panettiere, who plays cheerleader Clare Bennett on "Heroes" . . . thus disabusing the last few remaining people who still believed it of the notion that I'm a normal, decent human being. In my half-assed defense, Panettiere, at least, has since turned 18, but Erin is still a cartoon. And I, apparently, am still a sicko. Oh, well. But hey, where else can you get this stuff? 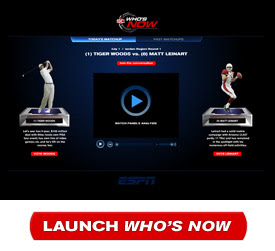 A liberal-arts grad cries "shenanigans" on the Worldwide Leader. (July 27)
This qualifies as a Very Important Post because it signaled the point at which I cast my lot with a select group of only a few billion brave bloggers who courageously made fun of ESPN for their "Who's Now" competition/contest/publicity stunt. Whereas other bloggers attacked "Who's Now" journalistically or ethically, however, I attacked it grammatically, which makes me a huge fricking dork refreshingly different. I still haven't figured out what the crap "Now" means, but if I did, I'm pretty sure this post would be Nower than a motherf%$#er. 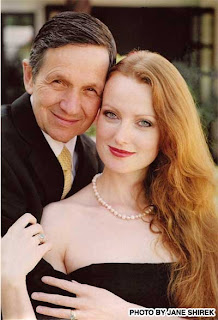 "You're with me, chino": Powerful douchebags and the women who (outwardly appear to) love them. (September 18)
I'll be honest, I thought this post was fricking hilarious when I wrote it, and was kind of bummed when it didn't get more play than it did. Oh well. At least I was able to show the world that supposed left-wing über-gnome Dennis Kucinich (with new wife Elizabeth, above) is actually a pimp beyond our wildest imaginations, which is an important service in and of itself. 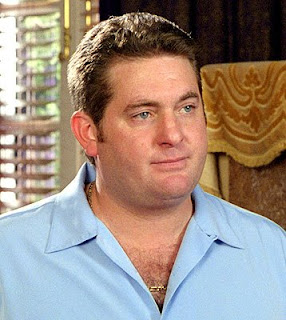 The unbearable Nice™ness of being. (October 10)
This is an important post because it contains actual usable advice, gained through years and years of sitting around waiting for chicks to notice my sensitive awesomeness and then turning into a cynical, bitter little dickwipe when they inevitably didn't. Guys, particularly those in high school or college: If you want to go out with a girl, seriously, you have to ask her. Sitting on your geek ass waiting for her to fall at your feet only dooms you to years of deeply unromantic lunches (yes, not even dinners, but lunches, the cold shower of meals) during which you get to hear all about the problems she's having with the football player who's actually sacked up enough to become her boyfriend. Trust me on this one, kids. 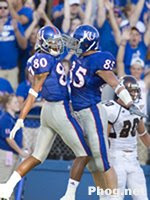 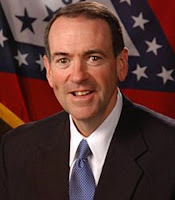 Going back to the "Simpsons" well: Your Favorite Football Team's Analogue, 2008 Election Edition. (January 9)
I may not be a smart man; I may not be attractive; I may not revolutionize the world with my writing or string together poetry that makes the ladies faint at the mere intonation of my voice; I may not be a great lover or a fighter; but I'll tell you what -- I can damn sure compare college-football teams to things.

Wow, after reminiscing through just one year's worth of posts, I realized something -- this blog is fricking sweet. You know what? Give yourselves a pat on the back for reading it. You've earned it.

Boy, those last two don't do a terribly good job of reinforcing my heterosexuality, do they? Just to be on the safe side, let's pull out a Not-So-Random 11th:

Now it's your turn, readers -- what have you loved about this blog over the last 365 days? Shower me with compliments (and your own Random Tens, if you must) in the comments.
Posted by Astronaut Mike Dexter at 7:37 AM

Great work Doug, I personally loved the "nice guy" post, as you can probably tell because I wrote a comment that bared a stronger resemblance to a term paper in length.

And I stole my Ipod back from my ex-fiance, so now I can do the ten again.

It looks like the powers that be shut down Self's website again, so nevermind that link, but you can get the album off of Amazon apparently.

Ok, last post. It's www.self-centered.org under Audio/Video in the B-side albums subcategory.

Doug, I realized a couple of months ago that I have been reading your blog for two years! I loved the top 25 UGA plays during the Richt era. And, though I am a conservative, I have learned not to yell at my computer when you espouse socialist rhetoric! Keep up the good work.

How many phone books is Denny boy standing on? It just looks unnatural.

No phonebooks, she's kneeling/sitting down. She can keep him in her purse and save on airline tickets to the UK as well.

And Hayden's supposed bf is 30 or over 30. Wonder how long dude played the waiting game (and how much time he's spent reading on statutes of limitations so he can know when he can admit the truth.)

In my defense, I will point out that I never had one of those "Countdown 'Til They're Legal" clocks on my blog like a lot of people did before the Olsen twins turned 18. I mean, seriously.

I don't read many political blogs, but I always look forward to your take on things, Doug. I did a little dabbling in politics in a recent post on my own blog, and because I have no idea where else to crow about it, check it out if you're interested:

The Big Lebowksi Rolls Through the 2008 Primaries

It's pretty much exactly what it sounds like it is.

Ack. That link doesn't look like it worked. Go here:

I loved the whole "A Bulldog Tempts the Wrath of a Vengeful God" series from the beginning of the 2007 football season. In fact, those posts are what got me started reading your very excellent blog. Keep up the good work.

1. "Sunday Morning Going Down" by Johnny Cash
2. "Suck my Kiss" by Red Hot Chili Peppers
3. "Five Magicks" by Megadeth
4. "Dream On" by Aerosmith
5. "Poison" by Alice Cooper
6. "I Wanna be Sedated" by Ramones
7. "Melancholy" by Iced Earth
8. "Don't Pay the Ferryman" by Chris DeBurgh
9. "Ride the Lightning" by Metallica
10. "Try (Just a Little Bit Harder)" by Janis Joplin

Nobody tickles my irony zone quite the same. Congratulations on the 3 years.

I've hit that damn shuffle button eleventy times & still can't get the Pet Shop Boys to show up. Technical question.....do I actually have to upload at least one of their songs in order for the wheel of fortune to hit'em?

Also for your perusal

a link would be greatly appreciated, cuz if the tree falls in the forest & no one's around.....

Where are the Bostons?

Wow, I have spent a lot of time here.

Great blog! I've been a regular for just over a year. Thanks for providing entertaining stuff on a regular basis. Congratulations and keep up the good work.