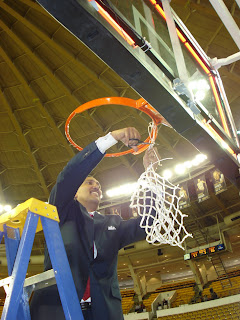 Photo stolen from Paul Westerdawg, who stole it from someone else.

I heard about the tornado that hit downtown Atlanta Saturday morning, and about how the SEC men's basketball tournament had been moved from the damaged Georgia Dome to Alexander Memorial Coliseum. And as I was driving around doing my Saturday-morning errands, I thought, "You know, this weekend has been just crazy enough that I'll bet Georgia takes advantage of the chaos, rises up, and wins the whole thing."

Did I believe that? Still not sure. Did the Dawgs believe it? Evidently, yes.

I got home Saturday just in time for tipoff against Kentucky, a game that ended with Zac Swansey's amazing 360-and-shoot three-pointer to win; I stuck around that night to watch them beat the other Bulldogs from Mississippi State; and Sunday I got to watch them build up a huge lead on Arkansas, nearly give it away a couple times, but hold on for a nine-point win, the tournament title, and an NCAA tournament bid. Now, I'll be honest here: Have I ever watched that much basketball in a single weekend? Doubtful. But it was fun. And what made it even better was that we did it on Georgia Tech's home court. BURN!!!!1!1!!!1!111one!1!!

Maybe we should petition the NCAA to let us play all of our home games in front of 400 people at Alexander Coliseum? In the meantime, I now have a team to root for (even if only briefly) in the Big Dance, and so do you -- join the Big Ass Tournamet Pick 'Em Bracket, the official tournament pick 'em bracket of Hey Jenny Slater, via the instructions at the end of this post.

You are just one of those georgia people who had no idea you even had a basketball team until you heard you won the SEC tournament all the sudden.

thelegacyx4: The spirit of your post is duly acknowledged. There are a few Georgia hoops fans who have diligently watched the entire season (and the last many years). Georgia's never had a consistent "powerhouse" basketball program (and the tournament championship certainly doesn't create one now). Is it somehow morally inferior that we should enjoy the basketball team's success? Or must we ignore it if we haven't been attending the games all season? Does your "cool test" dictate that we are forbidden to acknowledge the championship as the price for not having made ourselves publicly available for ridicule during the under-.500 regular season?

Yeah, those rules were once appealing to me -- when I was about 20 and all-of-a-sudden thousands of REM fans started coming out of the woodwork. The vinyl I bought in high school was such a meaningful sign of my coolness. Ah, the things children dig up to make themselves feel superior. Your analysis reminds me of the legions of Tech women's tennis fans that were born overnight last spring. Guess what? People really are allowed to celebrate their schools' successes without having paid the price of studying every aspect of the season.

So we'll have fun watching Georgia make a likely early exit from the Big Dance while you and your oh-so-coolness watches Tech -- do nothing. Have fun with that.

Kudos to you for letting us use your gym. We'll keep the nets, thank you very much.

Remember last week when I said I thought it was funny when little kids get super-angry? Tech fans kind of remind me of that. And they're equally funny.

lol. Excuse me as I go try to wash the burn marks off my body.

Congrats on your Dawgs Doug. I came by looking to see if you posted a bracket for the tourney. Hop over, take a look and let me know what you think of mine, if you have time.

Thinking of your Dawgs, I remember when I was a wrestler in HS, some kid from another school who'd wrestled JV most of the year, started the tournaments at 0-2, and then went all the way to the state semis or final before losing. Can lightening strike twice?