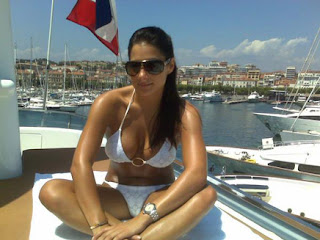 I understand. I know you're kind of overwhelmed right now. Probably more than a little embarrassed. And part of me sympathizes with you a little bit, but the other part of me -- a larger part -- would like to remind you of three things:

1. You were engaging in illegal activity.

2. In the course of that illegal activity, you had dealings with the governor of New York.

Based on those three things, all of which I think you would have to concede are facts at this point, it's probably time for you to have a nice tall glass of Shut The F$#@ Up.

You're 22 years old now, which means you were 12 or 13 when Bill Clinton got busted for getting his knob polished by Monica Lewinsky in the Oval Office. I think that's probably old enough to have been paying attention. You saw what happened when that whole story blew up -- Monica Lewinsky became a household name. It may not have been for the "right" reasons, but it happened. You thus had empirical evidence that one possible result of blowing a powerful (and married) politician would be getting thrust "into the 'public glare' without [your] consent."

(And on a side note, almost nobody puts up pictures of themselves in a bikini on their MySpace page hoping they won't be seen. The ones that do set their shit to "private," which you probably could've done in about five seconds.)

So yes, your life is probably pretty hectic right now, a lot more hectic than you'd like it to be. Your mom now knows that you're on intimate terms with the governor's wang, and unless she's one of those just-make-sure-they-spell-my-name-right Dina Lohan types, she's probably not real proud of that.

But unlike a lot of people in the news right now, you had a choice. The people in Atlanta who had their apartments and condos all torn up by a tornado? They didn't have a choice in the matter. The UNC class president who got murdered a few weeks ago? She didn't get a choice either. But while you were sitting there, waiting on Eliot Spitzer to unzip New York's First Trousers and unleash the First Balls -- hell, perhaps even when you were filling out that application to the Emperors Club and getting diamond-rated -- you had a choice of whether you were going to welcome those balls into your personal space. That point was probably the point at which you should've been thinking, "You know, if I blow the governor of the third most populous state in the country, it might pop up in the news one of these days." Now, unfortunately, is a bit late.

So accept that you've made your choice, the die has been cast, and the hole has been dug. Ride it out. Accentuate the positive and figure out how you're going to use all these offers from Penthouse et al. to further your nascent modeling career. Monica Lewinsky, after all, got a gig hosting a reality show; you, at the very least, have a contestant spot ready and waiting for you. (I, for one, think Tucker Carlson would welcome the chance to do the mambo with you -- the vertical one, mind -- on "Dancing with the Stars.")

But it's time to drop the victim act -- not to mention the "I'm just an innocent little girl who never wanted to become famous" act. In the words of one of my favorite blogs: Sack up, ho.

Email ThisBlogThis!Share to TwitterShare to FacebookShare to Pinterest
Labels: modest proposals, stupidity, you know what I blame this on the breakdown of? society

Well, but she didn't go to Washington with kneepads and a GOP full boat to Pepperdine. Isn't Ken Starr on the law school faculty?

UGA just won the SEC Basketball Tournament Championship. In case ya missed it...

And you don't try for a career in music--particularly hip-hop music--and not want some level of fame and "hey, look-at-me"-ness.

Now we await your advice to the former Govenor.