A memo from the desk of Arnold T. Pants, Esq.:
$12 billion down the tubes, SI's diminishing returns, and random acts of Spitzer-liciousness.

• So it snowed Saturday morning. Proof: 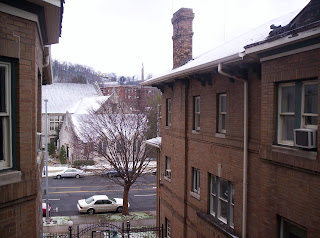 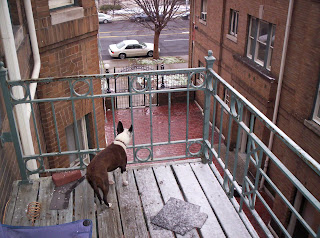 Those pictures were taken about 7:30 in the morning, and the snow had disappeared by 11. Well, it was fun while it lasted.

• Since I laid into David Vitter for nailing prostitutes while serving as Louisiana's senator, it's only fair that New York Gov. Eliot Spitzer, noted patron of the Emperors Club prostitution enterprise, come in for some abuse as well. Spitzer's offense might even be the dumber one, as it was exposed by the very FCC wiretaps that he championed as the state's attorney general, and also because he was considered one of the rising stars of the Democratic Party, perhaps even to the point where people would be looking at him for a presidential run in 2012 or '16.

Just in case nobody got the memo, I'll summarize it for you again: Banging prostitutes is illegal and will make bad things happen to you. Even if you're a powerful politician -- no, especially if you're a powerful politician. I mean, I'm nobody, and if I got caught in some prostitution ring's little black book, I'd get in trouble; when the governor of the nation's third most populous state is found to be hip-deep in paid-for poontang, you'd better believe there's going to be a shitstorm on the way.

I guess what I'm really trying to say is, I'm about as sex-starved as a human being can get right now, and even I've never been dumb enough to let the craving for pussy put my job in jeopardy. What's Spitzer's excuse?

• That said, according to this map, Spitzer still hasn't been anywhere near as prolific with the hos as has, say, Ludacris.

Eliot Spitzer may control the 212, but Ludacris has the block locked down most everywhere else.

• According to estimates by our own government, the war in Iraq is costing us about $12 billion a month. That's billion, with a "b." Over at Lawyers, Guns and Money, Robert Farley has come up with an eye-popping shopping list of all the cool shit the Pentagon could be buying with that kind of money, but I'd like to expand my viewpoint a little bit.

Obviously, since this is Pentagon money we're talking about, we need to take care of them first, so we'll buy them 15 Northrop Grumman KC-45 tankers ($3 billion) and 833 Mine Resistant Ambush Protected (MRAP) vehicles ($416.5 million), and after one year we'll have all 179 tankers and 10,000 MRAPs the military would eventually like to have in its arsenal. Just to be good sports, we'll throw in one B-2 Spirit bomber ($955,128,571) to replace the one that crashed in Guam last month, as well as a couple Boeing 787 Dreamliners ($334 million) they can use however they want. 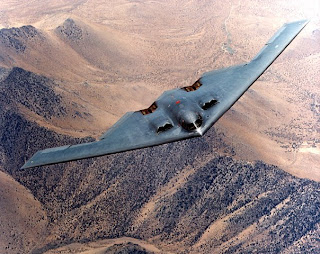 But if you break this one, that is it! No more!

But the next thing we'll do is take the S-CHIP program and give it the funding expansion that George W. Bush vetoed last year -- in just one month of Iraq spending we can afford to give it Congress's funding increase for an entire year ($7 billion).

And after all that, we've still got just a hair over ten million dollars to blow. Readers, I leave that chunk of money to you. Don't go spending it all in one place.

• Time magazine is coming under heavy fire for putting a gun to the head of one of its employees and forcing her to look at pornography. Only replace "pornography" with "the Sports Illustrated swimsuit issue," and "putting a gun to her head and forcing her" with "slid it under her door." Congratulations, America, we are now officially out of stuff to complain about which means that everything is perfect, and I can use this as an excuse to put up a picture of a chick in a bikini. 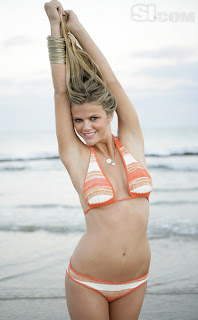 • That said, though, is it just me or is the swimsuit issue not nearly as fun (or cool, or racy, or whatever) as it used to be? I can remember buying my first swimsuit issue at the tender age of 12, feeling like a real badass because I was buying something so scandalous; now I browse one at the newsstand and I feel like I'm flipping through the Summer Swim Fashion Spectacular in Cosmo. Am I more mature now? Or just more jaded? Or is it the fact that I now have unfettered 24/7 access to actual porn explicit enough that I don't have to waste any energy mentally erasing Brooklyn Decker's bikini top while turning the pages of a magazine? Whatever, getting old sucks.

• OK, enough serious crap. The NCAA basketball tournament is right around the corner, and even though Georgia has about as much chance of making the field as Eliot Spitzer does of winning the Family Research Council's Man of the Year award, the UAB Blazers still have a shot at getting in, so I'm pumped, baby. And simply by virtue of visiting this blog (and, I'm assuming, being literate), you have earned an invitation to the Big Ass Tourney Pick 'Em Group, the official bracket competition of Hey Jenny Slater.

Simply go to this site, click on "Join Group," and enter group# 46220 and the password "goblazers" (all lower-case), keeping in mind at all times that your participation in this group destroys any chance that you will ever be hired as the head football coach at the University of Washington. Whoever earns the most points for correct picks in the tournament, though, will be called out by name on this blog as the most awesomest person ever, so there's that.
Posted by Astronaut Mike Dexter at 6:50 PM

Email ThisBlogThis!Share to TwitterShare to FacebookShare to Pinterest
Labels: hot chicks, Jenna the wonder terrier, my sordid personal affairs, Mystery Meat, politics, stupidity, you know what I blame this on the breakdown of? society

The Spitzer thing had NPR doing a little research to find out why men would seek out a hooker - particularly powerful men with a lot to lose by doing so - and it turns out there is a professor at the University of Oregon who has a grant from the Justice Department to find out why. *sigh* I should have been an academic. I could have been paid well to do research to find out the answer which I already know: our brains are in our dicks. Or prostates. Whatever, we can't help it.

The good news, according to the professor is that only about 15-20% of men have become acquainted with a hooker. He argued that was good, meaning that most men hadn't done so. I guess that is true. But at the 20% rate that would mean that about 25,000,000 men had visited a hooker, or roughly every fifth guy you see on the street has seen a hooker. It's a little different looked at that way. And I bet lots of the others just couldn't afford it.

I always find it amusing how you libs like to talk about the cost of the war in money and lives.

The debate could go on forever about it's worth which we probably won't know for years.

The amusing part is I don't hear the libs making any comparisons to the costs of illegal immigration which many have estimated at over $360 billion "with a B" per year and growing faster than can be
estimated.

We also don't hear about tobacco and alcohol costs to our nation which some say are in excess of $300 billion "with a B: each year.

Oh yeah lives, compare the death toll in Iraq and Afghanistan for the last 5-6 years to smoking. The death rate for smoking is 1200 U.S. lives per day, "with a D". Alcohol related highway deaths are at 40,000 per year.

I guess those alcohol and tobacco tax revenues are just too hard to resist? Maybe Hillbillary or Hussein can raise those taxes again while they're raising ours.

So Dougie, light you up a fag and have a drink while you sit around bitch in the comfort of freedom provided by a best military money and lives can buy. You a-hole!

Your entire comment is predicated on the assumption that the war in Iraq is somehow preserving and advancing freedom for American citizens, which is a tenuous position at best.

And why no mention of the current "conservative" administration's spending practices resulting in a huge deficit and inflation, which devalues every single dollar each of us own? Those costs are astronomical as well.

Dave, did you mean to say the spending practices of congress?

As far as assumming that the war in Iraq is preserving and advancing freedom, maybe you should ask the friends and family of 9-11 that question.

Congratulations. You are officially the dumbest human being alive.

Does the government force people to smoke or drive drunk? Or do they have control over where the military goes?