· Over at the Crimson Tide blog Roll Bama Roll, they're also breaking down their season opponent by opponent, and yesterday they did sort of a mini-roundtable with me and T. Kyle King from Dawgsports about how we think Georgia's season is going to shake out. Thanks to Todd and the rest of the RBR guys for letting me bloviate -- for some reason, just like food always tastes better when someone else cooks it, blogging is often more fun when you're pontificating on someone else's site.

· As a pinko socialist -- well, compared to 99 percent of the rest of the people in Alabama, anyway -- I'm probably supposed to think poorly of French president Nicolas Sarkozy, who was elected from the right-of-center Union pour un Mouvement Populaire party earlier this summer. Still, even the most conservative French politician is probably more liberal than most American conservatives. And then there's the fact that Sarko would be an absolute blast to hang out with -- funner, perhaps, than even Bill Clinton. Here's Sarkozy absolutely plowed, in front of Vladimir Putin, no less; and, also courtesy of Andrew Sullivan, here's Sarkozy . . . well, being Sarkozy, I guess. 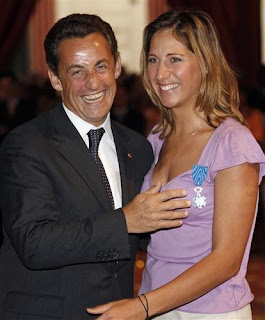 See, that's the great thing about France. If an American president was caught on film doing this, the articles of impeachment would be drawn up before his hand could even unclench the boob in question. But the president of France does it and the country just smiles, shakes its collective head and says, "That's our Nicolas, always grabbing people's boobs."

That said, if he lays so much as a finger on Melissa Theuriau, he'd better find someone else to start his Citroën for him in the morning.

· Britney's back, baby! Via The Superficial, News of the World tells the tale of Britney Spears's new video shoot:

"She was completely uncooperative and left everyone hanging about when she went for an hour's massage -- twice. She just didn't want to cooperate and was snotty and rude to everyone -- behaving like a complete and utter spoilt brat. When she wasn't pissing people off, Britney was smoking like a chimney. She didn't eat or drink anything other than can after can of Red Bull. She could have drank 20 of them all told . . . She had a problem with the extras being about when she did the pole dance. She was shy or embarrassed or something and she really started struggling with the whole thing. . . . "

Wow, we knew she'd forgotten how to dress, take care of her kids, or groom herself, but forgetting how to pole dance? She's really in trouble. But hey, at least she's got her looks back. Tell me this isn't sexy: 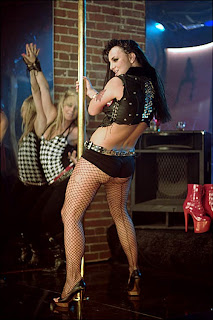 Sorry, I just realized I put a typo in that last sentence. I wrote "sexy" when I meant to write "Trent Reznor in drag." My apologies.

· Everything I've been hearing from the media says that the Braves' trade of Jarrod Saltalamacchia for the Rangers' Mark Teixeira was overall a good move, but I can't help but be a little disappointed. I was sitting at a Braves game with my friend Alex a few months back, and we were trying to come up with a fan club for Salty along the lines of "Matt's Bats" or "Sheff's Chefs" from a few seasons back, and she came up with a doozy: "Salty's Balls." So now what are we supposed to do? Are we going to have to sit here and come up with a pun on "Teixeira"? Good frickin' luck.

· In other Braves news, delicate flower Tom Glavine is upset that so many people boo him when he comes back to Turner Field. Here's how you solve that, Tom: Next time you come back here, don't come wearing a Mets uniform. Problem solved! You can thank me later. 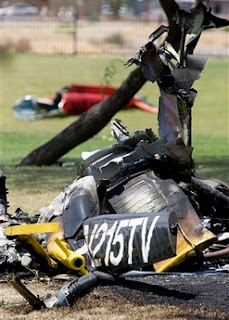 · As tragic as the mid-air collision of two news helicopters was last week in Phoenix, I've got a real problem with holding responsible the man who led police on the high-speed chase the chopper crews were covering in the first place. Yeah, the guy's a criminal, but it was the TV stations who made the choice to cover the chase live -- how did the suspect cause the two helicopters to crash into each other? Look at it a different way: Let's say there are a bunch of news helicopters circling around the Shrine Theatre on Oscar night to get aerial views of the crowds and the red carpet, and two of them hit each other and crash. Do you hold the Academy of Motion Picture Arts and Sciences responsible for holding a spectacle so big that the various news stations just felt compelled to cover it? Prosecute the chase suspect to the fullest extent of the law for carjacking and evading police, but don't use grief over a tragedy as an excuse to pile a bunch more charges on him just because you don't know what else to do.

· OK, that was kind of heavy, so here's something . . . well, even more disturbing. Here's "Mary Poppins" as a horror movie.

Weirdly enough, I'm now tempted to put Julie-Andrews-as-Mary-Poppins on my Chicks I Shouldn't Think Are Hot But Do Anyway list. What? Why are you looking at me like that?
Posted by Astronaut Mike Dexter at 7:42 AM

The Poppins video is pure genius!

Dude, Julie Andrews is pure hotness itself. I sat thru two hours of the movie "SOB" just to see her tits. I've had it bad for her ever since I saw "Mary Poppins" in the late 60's.

It's funny that you mention Mary Poppins. I took the Girl to see it at the Alabama Theater on Sunday since she loved it as a child and I'd never seen it, and the first time Julie Andrews was on screen I instantly thought of your "Chicks I Shouldn't Think Are Hot..." list and knew if I did my own Mary Poppins would be #1.

Glavine is awesome, and he'll go into the Hall of Fame as an Atlanta Brave. Booing him is classless.

i have a suggestion for the mark teixeira fan club. Require all attractive women entering turner field to sit in the predesignated area in the right field seat to be "tex's ex's." I like it.