A liberal-arts grad cries "shenanigans" on the Worldwide Leader.

I'm sure most of you already have seen the ridiculousness of ESPN's "Who's Now?" bracket get hashed out thoroughly and repeatedly in the sports blogosphere. It's a silly idea, but more than being just silly, it's superfluous: They're hyping athletes in a contest to determine who's the most hyped, as if hype were something to be admired on its own merits. It's the equivalent of a "Richest Man in the World" contest in which the individual determined to have the most personal wealth wins a prize of ten million dollars, and while that may have formed the basis of our current administration's taxation policy over the last six years, I see no reason why that should have any influence on sports commentary.

So anyway, that's dumb in and of itself, but even if I didn't know anything about the "point" of the "bracket" (to the extent that it "has one"), I'd still roll my eyes at anything called "Who's Now?", for one simple reason:

You can't be an adverb. 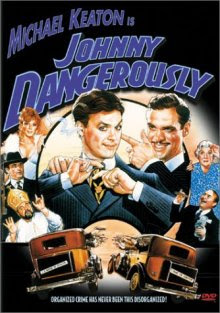 Unless you're Michael Keaton, of course.

We live in a country where people will demand vehemently that English be made the "official language" even though they themselves have about as much awareness of the actual rules and structure of said language as they do the Malaysian stock market, so I'm going to give everyone a little refresher course on grammar here. You may already know all this, but just bear with me for a sec. Wikipedia -- a now reference source if ever there was one, buddy -- states that an adverb is a part of speech that "modifies any other part of language: verbs, adjectives (including numbers), clauses, sentences and other adverbs, except for nouns; modifiers of nouns are primarily determiners and adjectives." (My emphasis.)

Things are described by adjectives. Adjectives are words like "white," "hilarious," "tired," or "irresistible," just to name a few. You can be any of those things; heck, I'm all of those things, right now, even as I type this. Adverbs, on the other hand, might describe the degree to which or the manner in which I am any of those things -- "blindingly white," "utterly hilarious," "constantly tired," or "sexually irresistible," for example. Adverbs might also describe verbs -- the boy ran quickly, the car skidded sideways, Jessica Alba groped me hungrily, etc. etc.

However. The boy runs quickly, but he himself is not "quickly." Jessica Alba is groping me hungrily, but she herself is not "hungrily," she is "hungry." And while my very existence might connote sex, I myself cannot be simply "sexually" -- I have to be be sexually something, be it "irresistible," "magnetic," "overwhelming," or whatever adjective you'd care to throw in there. 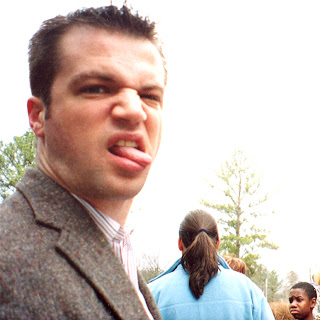 You know you're feeling it.

And "now," contrary to what you might have heard or what ESPN apparently believes, is, in fact, an adverb. It cannot describe a thing. You can be eating lunch now, Dick Cheney is probably strangling kittens now, I might be taking Jessica Alba on a voyage to ecstasy the likes of which she has never before experienced now -- look, you're not here, so you don't know -- but nevertheless, it is impossible for me, or you, or Dick Cheney or Jessica Alba or whoever, to be "now."

And no matter how superhuman Lebron James or Reggie Bush might seem, it is equally impossible for them or any of ESPN's 30 other chosen athletes to be "now." The sheer grammatical implausibility of "Who's Now?" renders it a meaningless, irrelevant question; they might as well have had a contest called "Who's Extremely?" or "Who's Meanwhile?"

On plenty of blogs better than this one, ESPN has been appropriately ridiculed for taking what amounts to a big popularity contest and trying to sell it as some kind of watershed moment in the history of sports, so I will let those bloggers' words speak for themselves. Instead of adding to the demands that the Worldwide Leader stop insulting our intelligence, I will merely demand that they stop butchering the English language.

And that they stop it right now.

Bonus contest for grammar dorks: I've hidden 30 adverbs in the above post. Find them all and you win absolutely nothing!
Posted by Astronaut Mike Dexter at 9:07 AM

Email ThisBlogThis!Share to TwitterShare to FacebookShare to Pinterest
Labels: stupidity

Nicely put Doug. Although, I have to cut ESPN some slack here because they have nothing else to report on right now. It's not just coincidence that this thing is ending as football is getting revved up.

As a grammar geek myself, I salute you. This post is both accurately and hilariously.

so tell me again, how are the wealthy 'getting away' with something?

Wow, anon, the way you put "getting away" in quotes like that, it's almost as if I actually said that . . . though of course I didn't.

But since you asked, my educated guess is that the top 5% of earners pay 53% of the taxes because they make 53% of the money, give or take. Somehow I think I can keep from getting outraged over that.

I like your blog, so dont get me wrong but you continually interject posts with your political left leanings, I think its fair to respond.

just hate seeing comments who insult the wealthy. the wealthy, most of which are first generation (contrary to popular belief), make this country what it is.

i've been to cuba, its a miserably poor place, i assure punishing the rich does nothing but destroy a country. what possible good could come from trying to demotivate your top citizens and then tell your bottom citizens someone else will take care of you. communism doesnt work.

sorry, dont mean to hijack your blog for political purposes, just scares me to see bright young college grads make 'educated guesses' and be so terribly far from reality. Makes me question what they are teaching in schools these days. Seems like they emphasise feelings and fairness over fact. Don't worry, last post, keep the football coverage coming.

Why doesn't the Worldwide leader cover sports like Rugby?

And unsourced numbers mean nothing in a political debate, show your sources, anonymous.

Sorry to come onto your blog and start talking shit Doug, it's late, my manners are off.

I would much rather see rugby coverage than constantly having ESPN try to cram soccer down my throat.

I think they took "it can't get any worse than Steve Phillips faux-press conferences" as a challenge and not a lament.