Desperate measures, or the long slide from 9/11 to Flaming Jeep. 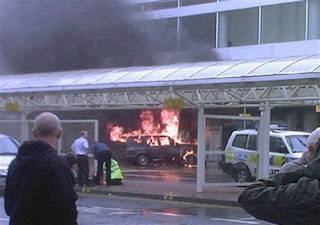 Insert "I'm sorry, sir, the red zone is for loading and unloading only" joke here.

See, this kinda shit is why I refuse to join in with the right-wing hysterics who insist that radical Islam is a threat to our very existence and will soon be forcing everyone right down to the burger-flippers at the McDonald's in Yankton, South Dakota, to turn east and pray five times a day unless we bomb every last majority-Muslim country on the planet.

Driving a flaming car into the front of an airport? Look, I'm sure it was a scary situation there, with more than a few Glaswegians needing to change their shorts before they hopped their flights for wherever, but this still had to be about the most half-assed terrorist attack in the history of terrorist attacks. It really seems like the kind of situation where there might have been a much bigger and scarier attack planned at one point, but then Ahmed flunked his pilot's exam, Ibrahim spent all his money on beer and flaked on buying the C4, and Omar's mom wouldn't let him borrow the van, so they all just had to make do with setting themselves on fire and driving Kemal's Jeep into the front doors of the place. I've been as critical of U.S. foreign policy and counterterrorism tactics as anyone over the last few years, but even I have to admit that we must be doing something right if in less than six years we've managed to reduce al-Qaeda from "flying Boeing 767s into the World Trade Center" to "driving a flaming Jeep into the front doors of an airport about one-tenth the size of Atlanta's," which, if memory serves, is not all that far removed from some of the shit that went down during Rush Week at UGA while I was there. (Which reminds me -- it brings me no pleasure to bring this back up, but when you get right down to it, Michael Lasseter managed to fuck things up worse than this, and he was just some dumbass white guy who was a little too eager to get to the Georgia-Ole Miss game.)

Or, to turn it around, if what we're doing in Iraq has made such a huge dent in terrorism, why are all you neocons still launching into such a pants-crapping, future-of-Western-civilization-fearing panic whenever something like this happens? Either this was a serious attack, which means we haven't made the world all that much safer from terrorism, or we have made progress and the overall retardedness of this flaming-Jeep crap kind of bears that out, but come on, you gotta pick one.

Still, given how reactive as opposed to proactive our homeland security steez has been from the very beginning, my prediction is this: Within a month, you won't be able to drive a car up to, say, Hartsfield-Jackson at all, or even within a mile of the place -- you'll have to park your car on the shoulder of I-85 and hump all your luggage to the main terminal yourself. And you'll have to do it barefoot, of course, because we can't have anybody trying to shoe-bomb the place. No liquids, either, so there will be guards posted at all the entrances who are ready and willing to taser you if you so much as try to bring a half-finished Fresca inside.

On the other hand, if I'm an upper-level executive for Greyhound, I am pumped right about now.
Posted by Astronaut Mike Dexter at 10:48 AM

Amen brother.....you cant have it both ways. Iraq-Iran issues aside - we seem to have made the world as safe as we can expect with terrorism. Lets all give the elected officials credit and put up a big Fu$*ing sign that says "Mission Accomplished"

Wasn't the car flaming after it ran into the terminal and blew up? It doesn't make it any less half-assed, but I'm just saying...

I don't know, Doug. I think this was just some random half-ass trying to make headlines; that and only that. I don't think this is "what we've reduced al-Qaeda to." Now al-Qaeda might be pleased as punch to have us believe that for some reason, but this incident, as well as the London car bombs, rank right up there with the dudes wanting to take down the Brooklyn Bridge with a blow torch. Rank amateurism.

Don't give anyone more credit than they deserve.

I've always just loved the word, "Glaswegian". Is there anywhere besides Norway and Glasgow that gets to use the "wegian" ending? It would be awesome if somewhere around here was like that...Alawegians, Tennewegians, Birmingwegians, Huntswegians, etc.

Well, now that you've dismissed the notion of a terrorist threat and put national security on the back burner, the only question left is which dem candidate will put more money in my pocket.