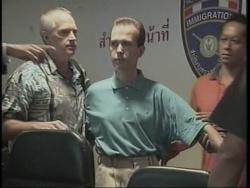 · Audience-participation time! See if you can figure out what sickened me the most about this story concerning legendary freakshow John Mark Karr:

John Mark Karr, who made what turned out to be bogus claims of killing Colorado child beauty queen JonBenet Ramsey, was jailed Saturday in a domestic argument at his father's house in suburban Atlanta.

Officers received an emergency call late Friday from the house about an argument between Karr, his girlfriend and his father, Sandy Springs Police Lt. Steve Rose said.

Got that? Confirmed child-buggerer John Mark Karr, who told everyone he raped and murdered JonBenet Ramsey apparently just for poops and giggles, has a girlfriend. And I don't. Help me out, readers -- pills? Drano cocktail? Garden hose from the tailpipe through the cracked sunroof? Your suggestions are always welcome. 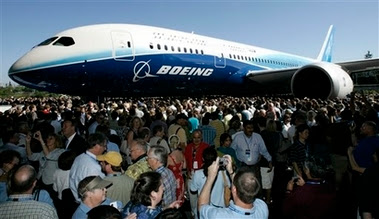 · The Boeing 787 "Dreamliner" is here. And as big an advancement as this plane represents in terms of materials, fuel efficiency and various other technologies, the advancement that will be most readily apparent to actual passengers is probably in the area of interior design: 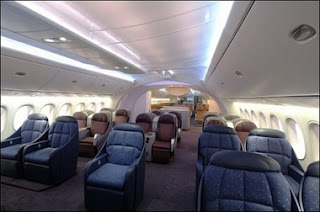 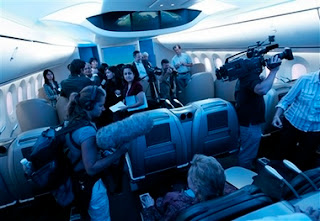 The mood lighting and soft curves in place of hard right angles might take some getting used to at first, but in the end I think even a "European disco" ambience will prove far preferable to "flying Greyhound." The 787 will make its first actual flight sometime in September, and will enter scheduled airline service in May or June of next year -- in plenty of time for a big marketing tie-in with the next "Transformers" movie, whenever that comes out.

· And there will be another "Transformers" movie -- actually two more, no doubt to the delight of everyone who went apeshit over the first movie that came out this past Tuesday. In this interview, Michael Bay says they're even exploring the possibility of a transforming aircraft carrier for one of those films. The reeking shitburgers that were "Armageddon" and "Bad Boys II" notwithstanding, I think Bay might turn out to be an OK guy after all.

· Still on the subject of airplanes, here's a tip for Clay Aiken: If you're flying coach from L.A. to Tulsa, Oklahoma, you're not a big enough star to be throwing your feet up on other people's armrests.

· Ah yes, more solid publicity coming out of my hometown of Columbus.

· I really don't have much additional comment on this -- I think I've made my point -- but man oh man, I never cease to be amazed at just what a huge pile of shit we've gotten ourselves into over there in the Middle East. It's getting to the point where I'm not sure any mortal human being can get us out of it. With that in mind, please let me know in the comments or via the e-mail address at top right whether you'd be interested in purchasing one of these. (I'm seriously thinking about having some printed.)

Posted by Astronaut Mike Dexter at 7:48 AM

Email ThisBlogThis!Share to TwitterShare to FacebookShare to Pinterest
Labels: airplanes, my hometown Columbus, stupidity, you know what I blame this on the breakdown of? society

Doug, if you ever get to fly the new Boeing Dreamliner, do you think the version they rolled out is what you would see, mood lighting and soft curves? That is for show! I suspect even first class customers will not see such a pretty sight, even with the pretty prices they usually pay!

I always thought timetables were the way to go, even from the beginning.

A large portion of the insurgents are fighting us because they think we're trying to take over their country. If we're leaving, they have no reason to fight. Ditto the ones who are fighting just because we're there.

Will the terrorists go to ground? Gosh, I hope so. Every day they're not making bombs is a day they might find a wife, get a job, or become a productive member of Iraqi society.

I'm sure Karr's girlfriend is a real peach herself. You want a girlfriend? Make your life a media freakshow that doesn't result in jail time and watch the ladies flock. Sure, they'll be into your "celebrity" and not "you" but beggars can't be choosers, eh?

You know. it's been at least a year since I started seeing "Condi 08" stickers on cars around DC... but they haven't been proliferating lately.

As for your proposed sticker, I for one welcome our new robot overlords.

I have to agree with Hmmmm, once Boeing starts building the ones the airlines will order you will see a lot more seats crammed in there. What is seen in this article was build by designers and marketing people, what will be ordered will be fitted out to fit the needs of the bean counters that want to stuff as many bodies in there as possible.

As to Karr's girlfriend this just shows how desperate women in Georgia are.

I'm not sure which is more disturbing...the fact that JMK has a girlfriend now or that he actually got some chic to marry him in the late 90s and stay for a few years.

I don't know you and I've never talked to you, however, I've been reading your blog for some time now and I think you're "good people". I'm thinking that it isn't the women who are turned off to you but rather you are more selective about who you want. In otherwords, you want a Ms. Right who could also be a Ms. Right Now rather than just a Ms. Right Now. Don't get me wrong, it's not a bad thing. In the end it will probably save you a lot of trouble. ;)

The thing is, John Mark Karr is in Atlanta and there are approximately 10,000 single white women to every single white man in this town. Plus, he probably ran the Peachtree.

Doug, you'd be right on the money about Optimus Prime, except he isn't an American citizen and he wasn't born here. I'm in favor of amending the constitution.

And for God's sake, OJ has a girlfriend. If your idea of a person's worth is their ability to attract someone who MIGHT have a vagina, then the first 19 years of my life were as worthless as a shit-filled nike. Just to rub it in, though, I did just get engaged.

Also, I'm looking forward to the football season. That means I'll blog a lot more and it gives us an excuse to be booze-soaked piles of MOTIVATED crap! Hope your going to the Alabama game.