The Peachtree Project, Day 1:
With God as my witness, I'll never be flabby again.

Y'all might not know it to look at the sedentary, booze-soaked sack of unmotivated crap I've become, but I used to be a pretty active runner. I started about midway through my senior year at Georgia; I don't know what prompted me to start doing it, but I wanted to try and get some kind of regular physical activity, so one morning I got up early and, starting at my apartment on Milledge Avenue, ran as far as I could before I had to cry uncle and switch to walking. And then every day I would run one telephone pole further down Milledge than the day I had before. (The fact that Milledge Avenue was home to nearly every sorority house on campus was merely a happy coincidence.)

In the span of less than one full semester, I was doing right around three miles every morning; not long after I moved to Lynchburg, Virginia, later on that summer, I was up to four. (And it wasn't an easy four, either; this won't mean anything to anyone who's never lived in the L-Boogie, but I lived on Langhorne Road and was running up that huge hill between Blackwater Creek and Rivermont Avenue.) I kept this pace up in Lynchburg, Atlanta, and the summer I lived in Columbus before I moved to Birmingham; I even kept it up for a month or two after moving here, but whether it was because of my allergies or Birmingham's legendarily awful air quality, I started hacking up a lung every time I ran more than about a mile or so. And like any good American would do when confronted with something mildly uncomfortable or physically demanding, I quit.

Fast-forward to last week when I was home in Columbus visiting my folks. The Sunday AJC, naturally, was chock full of news about the Peachtree Road Race that was being held that Wednesday. I asked my dad if he was planning on running the Peachtree like he had the previous year (just to give you an idea of the shape that I've degenerated into, you'll recall that Pops ran 6.2 miles and came out of it just fine, while I started feeling dizzy just standing in the hot sun waiting for him). Dad said he was going to take a year off but maybe run it again in '08. And I then uttered a candidate for inclusion in the next edition of Bartlett's Famous Last Words, whenever that comes out: "I tell you what. When I get back to Birmingham, I'm going to buy a new pair of running shoes, and I'm going to start running again. And one year from now, we're gonna run the Peachtree together."

This past weekend, I bought myself a new pair of running shoes and some shorts. And this morning, I got up at a few minutes after five -- thanks to various work-, finance-, and personal-life-related stresses, I haven't been able to sleep any later than that anyway -- and took off down Highland Avenue. On this, the first time I've run for something other than my life in more than four years, I made it all the way to the Chevron station (where Highland busts a 90-degree right turn at the 280 overpass) before wussing out and walking. With the help of Google Maps, I recreate this distance here for your edification: 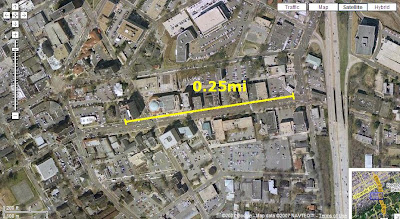 Google Maps calls this a distance of about 1,300 feet; I say fuck it, let's round it up to a whole quarter-mile. Either way, though, there's a long way to go before I make it up to 10 kilometers.

But a journey of a thousand miles (or even just 6.2) begins with a single step, and that, at least, I've accomplished. And I'll be keeping y'all updated on my progress here over the next year. Just major milestones and events that I might run in and things like that; I'm not going to bore you with updates on my weight, my diet, or what sports drinks I'm consuming. (I ain't changing my diet at all, and everyone knows my energy drink comes in a bottle marked Stolichnaya.) But I'm hoping that, in the grand shame-based tradition of Roman Catholicism, I'll be able to count on y'all to shame me into sacking up and forging ahead should my resolve start to flag at any point between now and July 4, 2008.

Tomorrow: a full three tenths of a mile? The sky's the limit!
Posted by Astronaut Mike Dexter at 7:14 AM

Congrats and keep it up.
You should check out this website: http://www.mapmyrun.com/

As the name implies, you can map your runs and it will tell you the exact distance. You can also save those runs, and share them with people. You can also search for other people's saved runs around your neighborhood or town, and add comments to the runs, etc. Pretty handy and neat little website if you ask me.
Regardless, congrats and keep it up!

If it makes you feel any better, I've done the Peachtree three years in a row and haven't died yet. And you know what an Adonis I am.

God, I remember hacking my way around Highland Ave a few years ago. You should try for the Vulcan Run in the fall. Good luck.

Use this, it'll help you out:

I use it every day to plot my route from my refrigerator where I keep my beer to my couch where I watch TV.

I think it is a fantastic coincidence that you started this exciting fitness plan the day I started my Fitness for Life: Walking PE class. (Yay for UGA's PE requirement?) I'll totally do the walking part with you! ...next time I'm in Alabama.

Good luck and I hope you are able to reach your goal.

I run between 2 and 10 miles almost everyday so I know how hard it can be to get out there and do it sometimes but one thing I've discovered is I always feel better for it afterward. :)