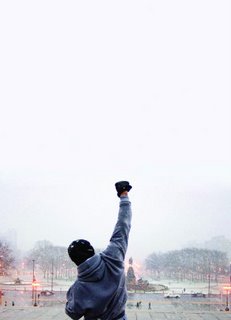 I try not to boast a lot about myself on this blog -- mostly because I rarely have much to boast about -- but a group of sports blogs associated with the Blogpoll have decided so start the College Football Blogger Awards, and in this, its first year of operation, they've named Hey Jenny Slater as a finalist in three (count 'em! three!) categories. They are as follows:

· The "Trev Alberts Quits to Do Construction" Award, for the funniest blog.
· The "Job Award," for "The blog that has suffered through its chosen team's dismal season with the most dignity." (Hindsight being 50/50, I don't think you could exactly call Georgia's season "dismal" when taken as a whole, but I won't deny it was certainly looking that way at various points; Brian at MGoBlog specifically nominated me for the toaster-throwing episode during the Georgia-Colorado game, which seems to have taken on a life of its own. I'm thinking of setting up a Wikipedia page for it just to see if it'll stick.)
· The "Jenn Sterger's Rack Award," for the best photoshop or other gag of the year (this was specifically in reference to the commemorative motivational posters I offered in the wake of this past year's Georgia-Georgia Tech game).

I'm not mentioning all this to beg for votes in any of those categories, because quite frankly, this blog can't hold a candle to some of the other blogs that were nominated -- really, you need to click on some of the links at Rocky Top Talk, where the finalists have all been collected, and check 'em out. But if nothing else, I wanted to point out that, yes, occasionally this blog does get recognition in a manner other than "Georgia football/the state of Alabama/the Washington Redskins/Democrats/the Volkswagen Jetta SUCKS, you faggot!!1!!1!one!eleven!!1!"

Anyway, good luck to all the other finalists . . . and now the Ten:

As always your own Ten(s) are welcome in the comments.
Posted by Astronaut Mike Dexter at 8:56 AM

Congrats! The toaster throwing episode is indeed a classic.

So how do we vote?

The "Angry Kitchen Maid" award - the most rage induced houseware casualties during a single football season.

By the way, "Begging You" is a frickin awesome tune.

Doug,
We need to update your iPod library dude.

I particularly enjoyed the fact that James Taylor came right after Pantera.