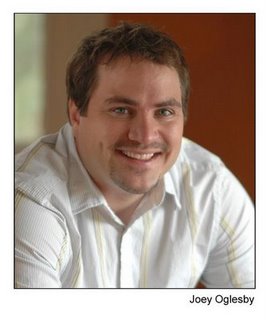 Look familiar? This is Donnie Davies, the "musician" behind the "God Hates a Fag" video and "Love God's Way Ministries" we discussed a few days back. Only it's not Donnie Davies. It's Joey Oglesby, a Dallas-based actor and comedian. And thus the mystery is solved.

I gotta say, even though it was eventually sussed out, Oglesby's hoax was a bang-up good one if it managed to keep this many people asking questions for this long. Good show, man. I can only hope that somebody will dig up a letter from James Dobson or Jerry Falwell or somebody sincerely proposing some kind of partnership with Oglesby's fictitious "ministry." (Oops, "propose," "partnership" . . . well, those kinds of things are illegal. Forget I even mentioned them.)

Thanks to everyone who weighed in on the issue, and congrats again to Joey Oglesby. This is the stuff of which Internet stardom (or, hell, even beyond-the-Internet stardom) is made.
Posted by Astronaut Mike Dexter at 1:20 PM

Email ThisBlogThis!Share to TwitterShare to FacebookShare to Pinterest
Labels: teh ghey

I am amazed anyone thought it was real, but good on him. I'll look forward to the movie.

Have you ever seen "godhatesfags.com"? If not, don't check it out. There are some seriously misguided people out there, and if someone told me some jackass had made a song called "god hates fags", my first assumption would be "must be one of those Phelps jackasses".

I guess the danger with this type of comedy is that if you do not know it is a joke, is it a joke?

There are a billion people who believe that God hates homosexuals. They are called muslims.