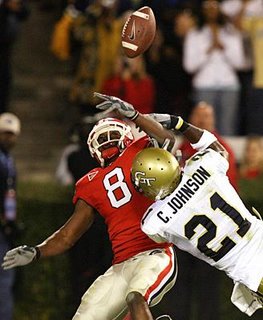 · You might think that after Georgia Tech got whipped for a sixth straight year by UGA, lost by heartbreakingly close margins in their first-ever ACC title game and then the Gator Bowl, and saw one of the best players in their program's history depart early for the NFL, I'd be tired of bagging on the Techies. But HA-ha!, I'm not!, and neither is Jonathan Tu, who brings us the following news story at his dead sexy blog 82 Sluggo Win:

Johnson, 21, hoped to rewrite American history for the better, particularly in the area of racial equality. Along the way the junior pass catcher -- considered by many NFL experts as a top ten prospect in the upcoming February draft -- also hoped to remove the Georgia Institute of Technology from the space-time continuum, thereby avoiding three seasons of futility with the Yellow Jackets during the first half of the twenty-first century.

"I've always admired Lincoln," Johnson said during Thursday's press conference prior to his temporal voyage. "He was a great man, a great leader in a time of desperate need. That he should die a scant six months after his re-election always struck me as one of history's crueler jokes."

Continued Johnson: "Not as cruel a joke as [Georgia Tech quarterback] Reggie Ball 'throwing' to me, though."

"Make sure you put 'throwing' in quotes," he added.

I had to exercise a lot of restraint to only blockquote those five paragraphs; it's one of those things that you pretty much just want to grab the whole thing. You do if you're a Georgia fan, at least.

· I know I rag on the Bush administration whenever they do something wrong -- though in my defense, it's not my fault they've been giving me so much material lately -- but when they actually do something right for a change, it's only fair that I recognize and tip my hat to them for it. So, George, thank you for coming to your senses and agreeing to put domestic wiretapping under the jurisdiction of an independent authority. What's really funny (and I mean that in a funny boom-boom way, not in a funny ha-ha way) is how so many conservatives -- those anti-big-government, authority-mistrusting conservatives -- are coming forward to express their shock, shock! that Bush would actually take such authority out of the hands of the executive branch. Yup, American Conservatism: still dead. Never thought I'd actually feel sorry for George Will, but I'm starting to. 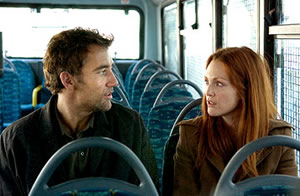 "You appeared in all those BMW movies, and yet somehow we end up riding the bus?"

· Your pop-culture endorsements for this month include "Children of Men," one of the few things outside of football that have ever given me cause to agree with Josh Massey -- it's an incredible movie, one that will give you plenty to discuss long after the closing credits have rolled. And I especially liked how detailed Alfonso Cuarón's vision of the year 2027 was -- just futuristic enough to know you're not in your own time period, but just grimy and depressing enough to be plausible. There aren't any flying cars or silver jumpsuits here, but what is there is stunningly rendered. To employ the Gunslingers' rating protocol, this is easily a Cadillac kind of movie.

Also: "30 Rock." One of the funniest shows on network TV right now, and along with "My Name is Earl," "The Office," and "Scrubs," it gives NBC its best night of prime-time programming since the "Seinfeld"/"Friends" years. Actually, maybe better than those years, because while "Seinfeld" and "Friends" were good, the stuff crammed in between them was inevitably crap. Now, NBC has four strong shows that are worth watching on their own merits and not just as something to distract yourself with while you're waiting for something that's actually good to come on.

Probationary endorsement: "Dirt" on F/X. I'm not convinced it's going to completely take the place of "Nip/Tuck," but it's fun and trashy enough to at least tide some of us over until "Nip/Tuck" returns in the fall.

· I know I'm way late to the party on this, but Clay Travis of CBSSportsline.com recently released his Power Rankings for SEC girls, and w00t!, Georgia ranked #2, behind only Ole Miss. For the record, I can live with that. Well played, Rebels, well played.

But Travis declares Georgia #1 with a bullet in the boobs category, and has an interesting theory: Is it possible that, with all these prospective students' educations getting paid for by the HOPE Scholarship, a lot of the female students are taking the money that would have gone for tuition and channeling it instead into shiny new cans? If you're a UGA alumna or student who has taken the initiative to augment what the good Lord gave you, I'd appreciate you offering some insight into this theory in the comments thread; in the meantime, here's an excellent bit of philosophy offered via one of Mr. Travis's friends:

After my column ran about the visit to Georgia, he pulled me aside and said, "Listen, Clay, if it's inside the skin then it isn't fake. I mean, you don't run around pointing to people with new hearts or new hips or new knees and talk about how those are fake hearts or fake knees or fake hips. They're just breasts."

· And finally, on what I guess is probably a related note, I have found yet another future ex-wife to add to what is becoming a lengthy list. Her name is Casie, and CBS was gracious enough to show her gracing the sidelines of the Patriots-Chargers playoff game this past Sunday. My friend Tristan was helping me secure my wireless network during the game, and when she came on the screen you could've heard a pin drop on a pool table -- we just looked at each other and simultaneously let out a Keanu Reeves "Whoa." So anyway, Casie, if you're bummed that the Bolts are out of the postseason and you're looking for some consolation, c'mon by. I can't promise much, but I can promise you that a date with me is more fun than getting bounced out of the playoffs by Bill Belichick. 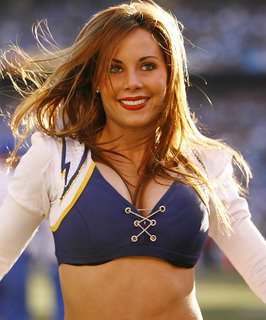 There was some guy named "Ladainian," some guy with the last name "Brady" . . . and then I kind of forgot what happened after that.
Posted by Astronaut Mike Dexter at 8:42 PM

Re: Casie. You have a secure wireless network and a new-ish toaster, I'd say you're in with a shot.

From a purely female perspective - that looks really, really uncomfortable.

Funny stuff about Calvin, but honestly after reading that post I didn't find it very believable. Calvin Johnson's grammer was far too good for it to be real.....

Also, I really liked "Children of Men" and I'd recommend it, but if you have to go to the multiplex this weekend, please go see "Pan's Labyrinth" instead. It's the best film that has been released in the past 5 years from ANY country and might very well make my prestigious top ten of all time if it holds up on repeat viewings like I think that it will. A masterpiece. Then you can sneak into "Children".

(Funny filmaker's note... Alfonso Cuaron, the director of "Children", produced "Pan's Labyrinth" due to the fact that his good friend, Guillermo Del Toro, wrote and directed it. I'm a geek.)

From a purely male perspective, that looks really really comfortable.....

On another note, you giving Bush props for returning the wireless eavesdropping to under the oversight of FISA is a good thing. It's kinda like when the state trooper thanks me for going under the speed limit or Wal Mart security cheers me on for not stealing shit.

hey dude, casie is at the university of san diego. majoring in management i think. jaw dropping hotness. yes.